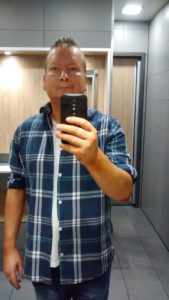 Monsieur Salut writes: on Twitter, where we found him, he goes by the name of ITFC COYB. Darren Elmy* is a Glasgow-based Ipswich Town fan who would normally have been at Saturday’s game as he loves visiting Sunderland and has Mackem family connections. Unfortunately he cannot make it but we do have his thoughts on both clubs and the match.

Darren’s a professional gambler; we hope he loses any stake he places on his predicted scoreline – 1-1 – but hammers the bookies if he hedges his bets with money on an emphatic home win …

Salut! Sunderland: you walloped us at Portman Road, by which time our own alarm bells were already ringing. Were Ipswich fans surprised at how bad we were?

Darren Elmy: I was surprised by how Sunderland played against us especially as I went to the game with my brother-in-law who is Sunderland mad and had told me that Sunderland would get promoted. Ipswich Town supporters on a club forum TWTD were surprised you had no spirit and just gave up after we scored the first goal.

A playoff position is not that far away but you must have hoped for better than 12th at this stage of the season (as I write). Disappointment or reality check?

At the start of the season Ipswich were favourites to get relegated so most fans have been surprised by the start we had and we aren’t that far from the playoffs even though we are 12th.

Are you a McCarthy supporter? He had a sorely limited budget at our place but might otherwise have done better, given he achieved one playoff semi, one promotion as champions and one FA Cup semi final place.

I have never been a fan of Mick McCarthy as he is very negative in his style of play. My brother-in-law told me about him and said you can have him as most Sunderland fans were glad to see him go. I do think though he has done well for Ipswich especially as his limited funds to buy players but I’m still like a majority of fans and want Mick out.

Do you rate Martyn Waghorn, who had very little opportunity to mark a mark for us?

Waghorn has been exceptional for us not just the goals he has scored but the assists and link up play. He’s a very good team player and has linked up well with Joe Garner.

Where are your strengths and weaknesses?

Weakness is definitely the full back positions, especially Luke Chambers who is playing out of position as he is a centre half. We have been conceding sloppy goals again this season. The strength have been scoring goals which we didn’t do last season, Celina has bought some flair into our team.

Marcus Evans seems even more shy and retiring than our own reluctant owner Ellis Short. Has he the resources and commitment to push Ipswich back to the Premier and keep them there?

He is a very wealthy guy and when he bought the club he invested heavily but Roy Keane spent poorly and since then Marcus has hardly spent any money on transfers. A lot of Town fans can’t stand him due to lack of investment. I think if we ever got promoted he would back us but as we know it’s very hard to stay in the PL.

Given the wide gap between rich and poor, what is realistically the best Ipswich fans can hope for?

Best and worst times as a supporter?

I’ve been following Ipswich for over 46 years so I have seen the good times and the bad, winning the UEFA Cup was the best time,the worst has to be when we got relegated from the PL.

The best player I have seen is Kevin Beattie the worst has to be Michael Chopra.
Sunderland: your thoughts on the club, city, fans, Chris Coleman? Did our sharp decline surprise you?

Sunderland are a massive club who should be playing in the PL especially as you have very passionate fans, always look forward to playing Sunderland away as I love the City,you have a very good manager in Chris Coleman who will get Sunderland climbing the league, yes I was shocked by how Sunderland have played this season and I thought they would be promoted this season.

Hand on heart, where will our clubs finish?

I think a lot of Town fans including myself that Ipswich will finish 10th this season. I reckon Sunderland will finish 11th.

The Niasse question: will VAR and retrospective punishment stamp out diving or making out players learn to cheat more successfully?

Unfortunately I will not be going to the game as I will be away, I reckon the score will be 1-1.

* Darren Elmy on himself: I’m 46, a professional gambler and have been for over 26 years. I’m from Chelmsford originally but now live in Parkhead, Glasgow with my Celtic-mad girlfriend. I’ve supported Ipswich all my life, my father worked for Ipswich Town in the Bobby Robson era and on my dad’s side of the family we are all Ipswich mad.

1 thought on “Ipswich Town Who are You?: ‘my Mackem brother-in-law said SAFC would go up’”

Next Post
The Lars word: Sunderland’s a Yo-yo team