I last saw Sunderland play in February, at the Macron, when we lost 1-0 in a dire and dreary game. Things have changed since then, not least the playing squad. In fact, in my three previous games I’d seen twenty-eight players starting, and the Charlton game was to add another eight. The only three I’d seen previously were Love, against Watford in December 2016, Matthews, at Preston almost a year ago, and Honeyman, whom I’d seen alongside Matthews and again at Bolton.

Taken all together it explains why I find it difficult to give a minute by minute or player by player commentary. But you’ve already had Pete Sixsmith’s report, and Malcolm’s introduction. You don’t need anything along those lines from me, even if I could emulate Pete. What I’ll try to do instead is give you a different perspective and write about the players who stuck out, for good or bad.

I was in the North Stand and we kicked off playing south, so it was our defence that made itself known first.

Our new keeper is OK at stopping shots, can catch crosses and moves about the box. But when it comes to distribution and starting attacks he has some work to do. Balls sent upfield often came back quickly because Charlton had big defenders who weren’t afraid to challenge for the ball. We struggled against them when kick-outs turned into 50-50 balls, which they did because McLaughlin’s no Jordan Pickford and Maja’s not experienced enough to win them outright. Will McLaughlin do better with Charlie Wyke as a target man? It’s possible, Sinclair helped raise the game and brought Maja into it more, so we’ll have to wait and see if Wyke can do something similar.

It wasn’t just kicking, however. When he played the ball out from the back McLaughlin did it too slowly and at times after telegraphing his intent. We almost got caught a couple of times, and we couldn’t get it forward because the recipient(s) were quickly under pressure. I’ve no doubt he’ll adjust to the pace, indeed he looked more comfortable in the second half, when he could play to Matthews, but I hope Jimmy Walker was making notes.

And when McLaughlin’s recipient is Ozturk rather than Matthews early pressure is not something you want. There were times when he looked like he didn’t know what to do with the ball. His passes went awry, tackles were missed. Opponents went past him, turned him, or passed beyond his reach and apparently beyond his ken. It could be a communication problem with teammates. It could be match fitness, but after 20 minutes I feared for us with him at the centre of our defence and thought he needed to be subbed. And yet, he got into the game. He didn’t give up and he had a much more solid second half. So maybe, with more game time, he’ll improve.

There were some good ‘uns. I’ve already mentioned Maja. He will be an asset but he showed in the first thirty minutes that he can’t do it on his own. When he had help he was much improved, especially in the second half, when Gooch began to be creative and Sinclair made space for him. And didn’t he score just when we needed it? There’s the beginnings of a good understanding developing between these three – only the beginnings, mind, they ran into the wrong space or released the wrong ball for each other too often, but they can only get better.

As can Bali Mumba. Cool, calm, collected. Mature beyond his years. You can pick from a load of clichés but he earned his keep on Saturday and gave midfield something that was missing when last I saw us play. I liked the way he was willing to step up, to collect the ball and that Charlton, for all their physical presence, found him difficult to deal with. I thought he stood out, whereas Honeyman didn’t, but I think Honeyman stayed in the game while Mumba faded in the last 20 minutes. Should Mumba play every week? Probably not, but he can expect to be in the line up again.

And let’s not forget Bryan Oviedo, who seemed to be a calming presence when he came on as a sub. We started to get back into the game shortly after he arrived. He made himself available for Ozturk, it was he who had the first real shot we managed, and it was he who put over the ball for Gooch to run onto for that killer goal. In between he was there when he needed to be, doing it right, doing it simply. A consummate professional. I’ll be sorry to see him go but don’t expect him to stay.

There were others, of course, but you have to remember that even with my specs on I can’t easily read names on shirts, and I’ve yet to recognise faces, hairstyles etc. An exception was Loovens, who from the start positioned himself just about in front of us and just too far away (physically and mentally) from Ozturk – did they first meet in the tunnel? I wondered about them both as players until half way through the second half. I suppose that my no longer worrying when someone was about to take Loovens on tells you how much he grew into the game.

I was also made aware of Maguire after about 10 minutes. There might be those who would criticise him for giving away the penalty. I wouldn’t be so hasty. He made a terrific effort to get to the ball after Loovens was turned and left for dead and he nearly made a saving tackle (while Loovens was still trotting back) and he was excellent when taking players on and pressing attacks, with Gooch or on his own. I’d stick with him

So there we have it. We matched a capable Charlton side for about 10 minutes, went behind and let them start to boss us. Taylor showed why we were right to try to buy him and their physical aggression (not dirty play, just combativeness and tenacity) matched with intelligence and no small measure of skill gave them the upper hand, and we could have been in deeper trouble.

But by half time we had stopped them and got back into the game. One-nil down, it’s true, but certainly not out of it. And the crowd kept faith. They were quieter than I’ve known but I have to temper that by saying I did see us win six in a row. There were no boos as the team went off, just applause and cheers, followed by further appreciation as they came back on, and even when time grew tight there was no negativity.

The second half brought an opportunity for a better look at our attack, in which respect I think the North Stand had the best of it. The restart brought energy and bite, Sinclair brought something that was lacking – I’m not saying O’Nien was poor but he never stuck out in any way – and Josh Maja brought that turn in the box which surprised both us and the keeper and lifted the crowd in the best possible way. 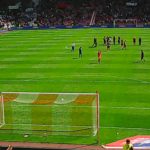 After which there was more and more pressing from players, including those runs from Gooch and Maguire, and a crowd that didn’t leave, that stayed to the end knowing we could do it, that erupted with Gooch’s goal and then stayed further to applaud the whole team, the manager and anyone else who came on to the pitch at the whistle. It was a brilliant way to end a football match.

True, there was a poor period in the first half. True, there were some players who didn’t impress me at the start. True, we must improve if we are to build on this win. But let us look at it another way. At the end of the match a motley group of players, still in the throes of assembly, still learning each others’ names, and still going to school in one case, were standing at the centre of a horde of formerly disenchanted, disengaged and disgruntled fans who were cheering their heads off because they had come to the realisation that with this motley crew, this manager and these owners we can do it.

Next Post
Sour grapes from Charlton fans after defeat – or a reality check for Sunderland?