Monsieur Salut writes: the original intention was to combine a small tribute to a sadly departed Boro fan, who often came to these pages to wind us all up, with an appeal for votes in a football blogging awards process and a shout-out for our 2,000th follower on Twitter. In fact, Twitter will have to wait and there will be no more than a passing reference in the footnote to the awards. This posting is dedicated to the memory of the Jack Wrightson, aka Smoggie, whose final wind-up was to gloat about his day at the Stadium of Light on August 21 …

But in true order of importance, the death of a welcome irritant on the pages of this site easily took priority. So rather than just re-order the heading or the text, it seemed right to concentrate on Jack Wrightson, a lifelong Middlesbrough supporter who died just a couple of days after he had watched his team beat ours at the Stadium of Light.

That Jack was a true football fan was never in doubt, even to those who tended to rise to the bait Jack – known here simply by his chosen nom de guerre, Smoggie – cheerfully attached to his line.

In his mission to annoy, Smoggie would say some controversial things about Sunderland, but he did so generally with a hint of humour and always without malice. I loved his occasional punts in Guess the Score with the postscript “give the mug to Jeremy [Robson, a regular and often truculent contributor] if I win”. Why? Well, “it’s no earthly use to me”. He said it again when, having originally opted for the 2-1 win Boro snatched in the last game he would attend, he had pre-match doubts and wondered whether we might win by the same score.

Like one of Smoggie’s duellists, Eric Bowyer, I had guessed that Smoggie might be in his 40s maybe. But there was a recent reference to a serious heart condition and he was, in fact, 76. 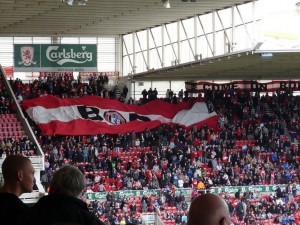 Let Jack’s daughter, Brenda Ablett, who kindly informed Salut! Sunderland readers of the sad news, take up the story, which also gives us a snapshot of her father’s life:

“Smoggie’s daughter here, if I might just break into your discussion. I wanted to let people here know that Dad passed away in his sleep on Tuesday night [ie the third night after the Wear-Tees game]. It wasn’t entirely unexpected and was very peaceful. He had heart problems for a lot of years and honestly never expected to live this long.

“Going to the Sunderland match at the weekend left him exhausted by the time we got him home – he lived with us – but he insisted on going and had a great time. I know not everybody on this website liked him but he loved coming here and often said he wished Middlesbrough had something similar.

“He could be very aggravating, it’s true, and he liked nothing better than to wind people up but there was no harm in him and he always said he spoke nothing but the truth about football and Sunderland and Middlesbrough. He was completely made up when he was asked to write something here about the team before their next game with Sunderland [Smoggie had accepted my invitation to take the Who are You? hot seat for the return game – Ed]. I was going to put it into grammatical English for him, he was no scholar. It’s a shame it won’t happen but at least he had the pleasure of being asked. In accordance with his wishes, there’s no funeral just a very simple cremation. I’m closing his email account now but I wanted first to give you the news. It’s very sad for his little family but we had him for longer than we expected and that was a happy thing. And I know what he’d want to say to you lot now, it’s something I taught him on the computer: lol.”

That comment was probably sufficient but Monsieur Salut wanted to know more, to publish a fitting little tribute to a genuine fellow supporter of football.

And this was Brenda’s response:

“Thank you for your kind mention of Dad and to everybody else for what they said. He’d have been well pleased. I’m not sure what or how much should be written about him; he was really quite a private person and didn’t let much out about himself, especially after Mam passed away.

“Certainly no photograph. He would hate that, he always said he took a terrible picture and he never even wanted to look at them.

“So what to say? He was born in Stockton and worked for a number of years on the fishing boats from Whitby. He always said it robbed him of seeing as much football as he wanted. As you [now] know he had chronic heart trouble and in the last few years he had to have oxygen sometimes. It stopped him from working but he had a bit put by and one way and another we always had enough to manage.

“He was a lifelong Middlesbrough supporter and loved Brian Clough. I was the only child and he said Brenda was the nearest he could get to Brian for a name. He always called me Brenda My Lass. He wasn’t able to get to many games any more but getting him a laptop and teaching him the basics meant that with that and the telly he could keep up with things.

“He always said he didn’t care what division Middlesbrough played in as long as the football was entertaining. Mind, he used to complain bitterly about much money they spent on players that weren’t worth it. That was a sore point. He used to say sometimes that Sunderland supporters were obsessed with staying up and wanted something better to do with their time. His joke was that when Middlesbrough wasn’t doing very well the supporters could always go and watch the speedway bikes at South Bank but that your lot had no choice but to keep going to the matches and that’s why you always got good gates.

“Last week was his first time at your new stadium but he enjoyed going to Roker Park, not only for the atmosphere but he said he never felt as if he might get thumped. He wouldn’t go to St James’ Park for that very reason – I think he got chased once. He didn’t think much of your new ground but he didn’t like Riverside either. He liked to stand up to watch a match.

‘I’ve wondered if the way he insisted on going last week was because he felt himself starting to slip away. It’s not something he would ever have said but he missed very little.’

“He was to put to bed when my husband got him home but then he was determined to come on your website again and make his mouth go. He was very happy to see his team back in the top division and to see them play Sunderland and beat them.

“He said when he got home that he could die happy now. And I like to think that he did, he just slipped away and that was very much him.”

Brenda’s final words were: “Please don’t make too much of this.” I hope we haven’t offended her by faithfully reproducing her beautiful tribute, which made sentimental old Monsieur Salut like her dad, annoying old sod that he was, all the more.

* Voting has begun in The Football Blogging Awards. Salut! Sunderland will not get even close to winning but we have been invited to enter. If you feel like casting a vote in our favour, the obvious category is Best Football Club Blog and you can support us at http://www.footballbloggingawards.co.uk/about/vote-now-football-blogging-awards/

Next Post
Chirpy Chirpy – no. Cheap Cheap – no. But what about Middle of the Road?