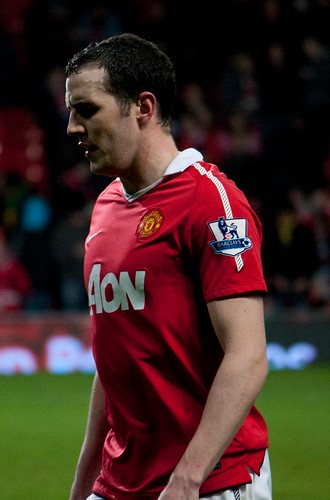 We stuck to our guns and stayed patient. Then the official news came, from both the Manchester United and Sunderland club sites: John O’Shea had followed Wes Brown into the Stadium of Light and joined SAFC for another of those idiotic undisclosed fees.

This is how the announcement came from safc.com:

The 30 year-old Republic of Ireland international … has agreed a deal which will keep him at the Stadium of Light until summer 2015.
O’Shea, who becomes Sunderland’s eighth permanent senior signing of the summer transfer window, will link up with former Red Devils teammate Wes Brown, who also made the switch from Old Trafford.
Speaking following the completion of his move, O’Shea said: “Once I’d heard reports about the club and the people here, the ambitions and what the manager was all about it was the only place I was going to come to.”

And the United site reported:

Sir Alex Ferguson paid tribute to O’Shea and backed Bruce to get the best out of the 30-year-old on a regular basis.
“John has been an outstanding servant to the club, since he broke into the first team almost a decade ago,” Sir Alex told ManUtd.com. “His versatility, calmness under pressure and his commitment to the cause at United means that fans will remember him with great affection.
“John has won so many medals – and has deserved every one of them. He epitomises our club’s approach as a team. After so many years of service to United, I’m pleased that John has found a career opportunity which will deliver the number of games he deserves.
“We wish John every success in his new life. Steve Bruce is a manager that knows how to blend youth and experience and I’m sure he has John earmarked for a senior role in trying to take Sunderland on from their finish last season.”
O’Shea becomes the fifth former Red on Wearside – joining Phil Bardsley, Kieran Richardson, Fraizer Campbell and Brown – with Bruce, of course, in charge and Danny Welbeck spending last term on loan at the North-East club.

Salut! Sunderland is delighted with the signing, and continues to be approving of Steve Bruce’s busy dealings in the transfer market. Welcome to John O’Shea and also to Wes Brown, whose signing was reported here.

Time will tell whether Darron Gibson is also heading our way. But there is one more Old Trafford name I’d rather like to see on a Sunderland shirt next season, however improbable it begins to look: re-arrange Welbeck and Danny into a household name and you’ve got it.

2 thoughts on “John O’Shea: our second Manchester United capture is official, too”

Next Post
A welcome to Wes Brown, officially a Sunderland player