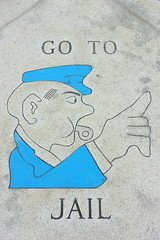 An inconsequential tale of football folk, coincidence and life in (and outside) the law …

Ten years ago, I met a man on holiday in Peru who turned out to be a judge.

He thought I was cool because on the day of the group’s homeward bound departure, I let everyone else take the tour company bus and stayed behind to watch Sunderland v Leeds (in Spanish) in the hotel before racing to the airport by cab to catch up. We lost 2-1.

We became friends and I came to think of him as even cooler, especially for a judge, because we shared obscure musical tastes: Bert Jansch, John Renbourn, Sandy Denny and the like. And as well as sharing my fondness for football and leftish political ground, he had a most unjudgely T-shirt showing a boy aiming a peashooter at a car (slogan: Lee Harvey Oswald aged three).

In one of life’s bizarre coincidences, it also turned out we had a Sunderland-supporting friend in common. I wrote about it elsewhere with an opening sentence along these lines: heard the one about the university drinking pals who went on to become a judge, a headmaster … and something else?

Dylan, as I call the judge (he loves the pseudonym) agreed on leaving Lima that we’d meet up once back home. And a few months later, Sunderland were playing Dylan’s team and we stayed the night with him. Along with the invitation came a cheeky request for me to acquire the match tickets.

What, I thought, is the point of being a judge if you cannot get football tickets? It wasn’t a problem for me, except that I could only buy places in the Sunderland end. My friend promised to behave himself and sit on his hands in silence if his lot scored, which inevitably they did (we didn’t).

Back at his place, my wife asked if I had seen any of the usual crowd at the game. Yes, I replied, Dougal the headmaster was there, a couple of rows behind us. Dougal is not his real name, of course, but I’d better keep up the Magic Roundabout theme.

“Dougal,” exclaimed the judge. “Is that a common first name in the North East? One of my best pals at university was called that.”

And it was indeed Dylan’s Dougal. The pair had more or less lost touch as one rose in the legal profession, the other, via at least one other career, in teaching. When we said goodbye next day, I promised to tell Dougal of the coincidence.

When I did, later that morning, Dougal’s memory was instantly taken back to some boisterous undergrad nights. “There were three of us, you know,” he said. “The other one was ‘umphrey from ‘astings. We were always together.”

Now in the case of ‘umphrey, who maybe should have been called Zebedee, the name has been changed to protect not the innocent, but the guilty.

The guilty? What had become of ‘umphrey). “Oh, he’s in prison,” Dougal said. Something to do with drugs.

“But has he learned his lesson?” I wondered. “Only,” my pal replied, “to the extent of being bloody sure he won’t get caught next time.”

1 thought on “Judges of character”