Young Keir can’t contain his excitement with this latest disciplined performance from the red and whites. Another assured away performance against a top seven side is put to Master Bradwell’s purring pen …

It’s quite fun giving 10s. The two who have them this week certainly deserve them.

Didn’t concede against a side who had 17 shots – even if most of them were off target – and eight corners. He might have spilled one or two of the latter but you can’t really complain if your goalkeeper keeps a clean sheet.

Skilful, as ever, and composed in defence. A lot less clumsy than before, too. Glad you all agreed with me calling him clumsy last week…(huh?!-ed)

Brilliant. His performance and Brown’s were outstanding. They made last-ditch tackles, headers and some brilliant blocks between them. O’Shea was a warrior on Saturday.

O’Shea, except I recall one tackle right in front of the goal against Hernandez that saved us from conceding the equaliser, which is why he gets a 10. A phenomenal performance.

As with Vergini, defensively solid against Manchester United’s attacks, which were predominately down the wing. Strolled forward on occasion, too.

I’m still not completely won over by Cattermole. He was, however, undeniably excellent at Old Trafford. He’s getting better on his passing, his tackling and interceptions have become much more clinical. I’m still not convinced he should be the linchpin of this side next season. 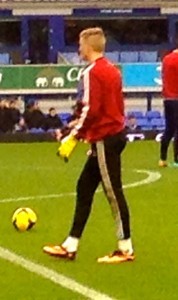 Larsson has been a massive influence on the side recently. He just ran and ran and ran to the extent he had to hobble off in the second half, suffering from some sort of injury. His goal was absolutely brilliant, a sweeping shot across the face of the goal, nestling itself in the bottom corner, and was one he deserved after weeks of brilliant performances. Extremely proud to see him in this side on this run of form.

Doesn’t have the impact on the side Larsson does, but is still very efficient when he’s on the ball and often a helpful route out of trouble.

Weak! From being our man in form at the start of the year to being the worst performing player in a Sunderland shirt. He wasn’t poor, as such, just not in the same class as Larsson, Borini, Wickham and the others around him. I’d love to see him score on Wednesday to help his form pick up. 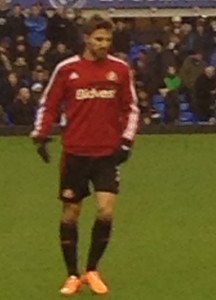 Hit the bar in what would’ve been goal of the season and helped out in defence, too. His work rate, like Larsson’s, is incredible. Please stay at Sunderland next year, Fabio.

Assisted Larsson’s goal with a wonderful floating cross from the corner quadrant and his back towards him. Has the pace and size to be a top class Premier League striker at Sunderland. I really hope he fulfils his potential.

Still shouldn’t start against West Brom because his role as an impact substitute has been working wonders and I wouldn’t want to mess with the system that is currently working so well. However, he’s been in outstanding form recently. Very unlucky not to score, too, as he hit the woodwork late on.

Almost got an assist for Giaccherini’s chance, but apart from that failed to make much impact on the game as a substitute.

Didn’t have time to do anything noteworthy.

Next Post
There’s only one Jody Craddock: Sunderland, Wolves and art