Two months from now, we will reach the 10th anniversary of the death of Len Shackleton, one of the greatest players – and arguably the most charismatic – to wear the red and white stripes of Sunderland AFC.

Salut! Sunderland thanks Mark Walton, at the Blackcats list, for a link to a superb BBC 5 Live documentary presented by Jimmy Armfield a few years before Shack’s death.

“Football’s clown prince and soccer genius,” was how Jimmy’s item was headed and on any number of levels it is well worth a listen. The link is in my footnote.

I especially liked the Brian Redhead anecdote about the Shack penalty for Sunderland again Man City, which my records suggest must have been Aug 25 1951.

Shack scored three times against the great Frank Swift; it was to be his best season for us as a goalscorer, joint top with Trevor Ford on 22.

One of the goals was a penalty. Shack stepped back from the spot. And kept on going until he reached the halfway line. Then he began to gallop forward before aiming a mighty kick that launched Swift into a dive.

But Shack hadn’t touched the ball. He calmly turned his back to the goal and backheeled the ball into the opposite corner of the net.

The last keeper I saw chasing halfway across a field was the appalling Buffon, utterly intent on ensuring Zinedine Zidane was sent off for butting Marco “The Oaf” Materazzi. Swift’s chase was to grab Shack’s head in his huge hands and plant a kiss on it. Kindred spirits in other ways too: both became highly respected football reporters (Swifty dying in the Munich air crash).

There are not many thing I am too young to have done, but seeing Shack play for us is one of them (I was a kid of eight, and had never seen a professional match, when he turned out for SAFC for the last time).

But I do proudly possess a Philosophy Football Shack T-shirt – the famous blank page from his book, Clown Prince of Football, on the front and name and number (Shackleton/No 10) on the back.

And I have one anecdote of my own. 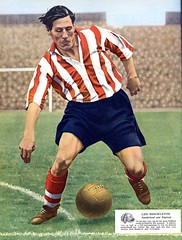 On a Tuesday in Nov 2000, the day after Shack’s death aged 78, Sunderland were playing Man Utd in a League Cup fourth round tie. I had manipulated a work visit from London to the North East to make sure I could be there. I think it was to interview the professor of folk music – and what else would you wish to be professor of? – at Newcastle University.

We won 2-1 after extra time, Kevin Phillips scoring the winner from the penalty spot, without taking his run-up from the halfway line.

With time to kill before the game, I had been walking through the Bridges shopping centre when I suddenly saw a Sunderland Echo newspaper billboard announcing “Shack dead”.

Saddened, I handed the news vendor my coins only for her to tell me: “It’s not in the paper, pet. It was too late for them. I just thought people would like to know.”

As I wrote on these pages a long while ago, it was a terrific gesture, in its own way a great tribute to a great man. And I naturally bought a paper anyway.

* Listen to the documentary at this link

15 thoughts on “Len Shackleton: a clown, maybe, but a genius too”

Next Post
Manchester United: the gods – and divers – of Old Trafford