John Mac writes: Man City breezed past second division Leeds on Sunday, extending to 41 years the length of time that has elapsed since United last won the FA Cup (they have won the league twice since then but that all seems a long time ago, too).

Forty years ago this fixture could have been the final had City not come up against a different second division side in the fifth round, one that was much, much better than the Leeds of today.

Following the weekend Sixer’s Sevens summing up that Man City-SAFC game, and better 40 years late than never, here is Pete Sixsmith‘s account of his trip to Maine Road, when the first of three teams from the top division succumbed to the Stokoe magic. The general plan is pursue our 1973 cup run in similar fashion until May 5. It beats getting upset again about our lamentably early exit this season …

As the train pulled out of the Stygian gloom of Sunderland station on the morning of the game, the general consensus of the group was that a draw was probably about the best we could expect.

As the train pulled out under the splendid roof of Manchester Victoria after the game, the general consensus was that we had been robbed of a glorious win and that glamour boys City were really lucky to have a second chance.

Ray Tinkler of Boston, the alleged referee, allowed a ridiculous goal from Mike Summerbee to stand despite Rodney Marsh standing in front of Monty and blocking him, causing him to knock the ball into the net as he tried to grab the City player’s corner.

It cancelled out the fantastic goal that Billy Hughes had scored a few minutes earlier. Dennis Tueart had set him away and he skinned Jeffries, the City defender, before thundering a shot past Corrigan, who barely saw it, never mind save it.

That we, a mid table Division Two side, had taken the lead against Moneybags City, a club who spent money as if it was going out of fashion, was quite astounding for the horde of Red and Whites scattered all over Maine Road.

It was not a lead that was fortunate. After losing a goal to Tony Towers, a player of little charm and much aggression, we had levelled through Mickey Horswill. Poor old Joe Corrigan (ha, ha) had kicked the ball straight to Ginger Mick instead of full back Donachie. He promptly despatched into the net, silencing the mature lady with the bell for a few moments at least.

After that, we absolutely dominated the game. Bobby Kerr, Ian Porterfield and Bobby Kerr ran the midfield. At the back, Dave Watson, looking a far better centre half than he was centre forward, and Richie Pitt, who could have been playing at Sincil Bank for Lincoln City against Newport County. 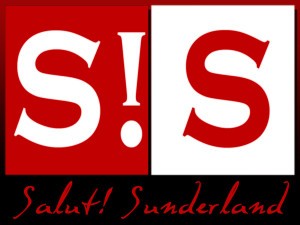 The whole team were quite magnificent. There was not a weakness in the eleven. From Monty through to “Dennis, Dennis Tueart on the wing” we chased and harried as a lower league side should.

But we also played football and we played it with panache. There was pace up front from Hughes and Tueart combined with the strength of the excellent Vic Halom, a Hungarian becoming even more popular than the Vesta Hungarian Goulash I had for tea last week.

Had we held on for a few more minutes, City would have more than likely fallen apart. Colin Bell was never in the game, Rodney Marsh lived up to the song that 12,000 travelling Sunderland supporters bestowed on him and Tony Towers was, in the words of an older teaching colleague, a “guttersnipe”. He was deservedly sent off for thumping Mickey Horswill. I can’t see a player like him ever don the famous Red and White stripes.

And take a peek at ESPN’s Sunderland pages, courtesy of Salut! Sunderland on tour: http://espnfc.com/blog/_/name/sunderland?cc=5739

The train provided by British Rail was full. It was full of passengers, it was full of beer and it was full of Police Officers – and police dogs. It was made up of carriages that had probably been used the last time we won the Cup all those years ago. Comfortable it was not, but not one of us minded.

The drink slid down as we passed through Huddersfield, Leeds and York. Empty cans of Double Maxim, Tartan Bitter and McEwans Export littered the tracks all the way home. We arrived in a noisy and joyous Sunderland in time for several pints of Samson in The Albion and then slept soundly before we got up at silly o’clock to go and queue for tickets for the replay.

It could be a cracker.