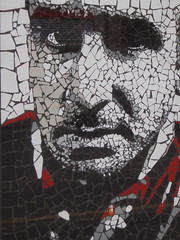 Who are You? That’s the question we ask before each Sunderland game. Paul Eccleston*, our first visitor this season from the ranks of Manchester United followers, is that rarity: an unblinkered football fan. His lifelong support for the club does not stop him recognising Nani as a diver who has effortlessly inherited Ronaldo’s crown. Leaving aside that aspect of their play, how do such men compare with top Red Devils of the past? Paul, whose self-description – “Fleet Street journeyman” – does scant justice to an exemplary career as reporter and news editor, reflects on the flawed giants of Old Trafford …

To read part two of this week’s edition of “Who Are You?”, click on The Republik of Mancunia speaks

Salut! Sunderland (question posed before last night’s United win in Valencia): Let’s start below the belt: are Manchester United already out of the title race and has Sir Alex, great a manager as he’s been, gone past his use-by date?

I think it will have crossed the mind of most United fans that we have to start thinking about life after SAF. We’ve already had some very dodgy draws against teams we should have beaten – Fulham and Everton in the Premiership and Rangers in the Champions League. Does this have anything to do with our failure to make any headline signings for the second successive season? Does SAF genuinely see no value in the market or is he being denied funds by the Glazers? Another failure in the Champions League and finishing behind a rampant Chelsea in the Premiership this season will inevitably lead to claims that Ferguson is past his sell by date – but how many times has he confounded the critics before?

I suspect that he has already decided when he will go – possibly at the end of next season – and has already played an active role in deciding who his successor will be – probably Jose Mourinho who by then will have completed two seasons at Real and is really the only manager with the track record and the arrogance to think he can take over from Ferguson.

Your boyhood dream must have been to play for United. How far did getting trials with Bury compensate for not doing so and how close did you get to making football a career?

I was a million miles from ever being good enough to make a living out of football. I was a good amateur who played to a decent standard in the Lancashire Amateur League. The best player in my school team was a centre forward called Mike Brennan. He was snapped up at 16 by Man City and went on to play a handful of games for them in the late 1960s before slipping down the leagues where he made a good living out of being a semi-pro and now still coaches in Australia. He was twice as good as I ever was and if he couldn’t make it then I never would have.

What has been your best moment as a supporter? And worst?

Watching them win the European Cup for the first time in 1968 when they beat Benfica at Wembley 4-1.

Being at Hillsborough in 1964 when West Ham beat them in the semi-finals of the FA Cup. The ground was filled with ‘I’m forever blowing bubbles’ and even now when I hear it, it takes me straight back to that day.

Am I right in thinking you are just about be old enough to have some childhood memories of Munich? Do you recall how you found out and the impact it had on you?

I was only seven and have only the vaguest memories of it. Geoff Bent, one of the reserves who died in the crash, had relatives in our street and was buried in our local church – St.John’s, Pendlebury.

Who are the greatest players you have seen in United colours, and who should never have been allowed to wear the shirt?

I grew up in the sixties and was able to see the Law/Best/Charlton team. Even when Best was in his pomp, it was always Denis Law who was crowned king by the Stretford End. His cheek, unpredictability and quicksilver reflexes made him my favourite player.

Unfit to wear the shirt: Eri Djemba Djemba who must be SAF’s worst mistake.

If not covered in the previous answer, what are your thoughts on Cantona, Keano and Steve Bruce?

Cantona was a one-off. Hugely talented maverick who when he moved to United lived for ages in a council house in Wigan (Paul later amplified this: “he lived on suburban estate in a very modest semi-detached. It may have been privately owned but looked like a council house. He only moved out when the pix appeared.”

Absolutely no airs and graces and much smarter than the average footballer. Also supremely talented, capable of winning matches on his own and then celebrating by puffing out that enormous chest. Must rate as one of the best players ever to grace Old Trafford.

Likewise Bryan Robson. Captain Marvellous, never-say-die attitude, box to box player as comfortable tackling as he was making or scoring goals. Would appear in any Top 10 players list.

Steve Bruce was, with Gary Pallister, the rock on which Fergie founded his first title-winning team. When he wasn’t putting his body on the line for the team in defence he was in the opposition penalty box scoring vital goals at key moments of the season –especially the two against Sheffield Wednesday which gave United their first Premiership title.

Roy Keane: Man Utd does seem to attract great players who are also flawed. Cantona and George Best are good examples and so is Roy Keane.

A footballer in the Bryan Robson mould, not physically massive but Keane was imbued with an incredible will to win as well as being equipped with a superb engine that took him effortlessly from one end of the pitch to the other.

Keane could run, tackle, pass, score and play all day but he expected every other member of the team to do the same with predictably catastrophic results. Very few players even came close to matching his qualities and he was never shy about talking about other players’ failings.

A psychiatrist would have his work cut out trying to fathom the quiet man from Cork whose skills were often overshadowed by the viciousness he was capable of inflicting in the heat of battle. But Keane’s name would be first on any manager’s team sheet.

Do you have any profound memories, good or bad, of past United v Sunderland games?

The only one that sticks out was an FA Cup replay in 1964 when Law scored a hat-trick .

Our place is full of people who, Bruce excepted, didn’t quite make it with you. Does that give you a soft spot for Sunderland or couldn’t you care less about us?

Steve Bruce obviously has a good relationship with SAF because of the players he manages to secure on loan, the latest being Danny Welbeck. It’s good to see Kieran Richardson doing so well. He was always a good player but never quite had the right attitude in his time at Old Trafford. I follow Sunderland’s fortunes with interest but I could never say I have a soft spot for them.

What is your own minimum expectation for this season? Name the finishing top four in order, and the bottom three.

I can’t see us being strong enough to win the Premiership this year. Chelsea’s start has underlined their strength and we’re already points behind because of careless draws. Runners-up is the best we can hope for this season.

Salut! Sunderland became like a scratched old gramophone record last season, always on about diving, feigning injury and the odious act of trying to get opponents booked or sent off. Is it time to abandon high-minded principles about fairness and the spirit of the game and accept that cheating is now part of it?

Cheating is now, unfortunately, part and parcel of football, and particularly diving, but we should never accept it. Referees must be tougher on the divers and come down as hard on players who seek to have opponents sent off viz. Torres and O’Shea last week-end. Although I accept absolutely that O’Shea deliberately pulled him down, Torres did not need to try and get him sent off. I’ll readily admit that United have some of the worse offenders for diving – once it was Ronaldo and now Nani has inherited his crown.

How will you keep tabs on the game and what will be the score?

It’s the pick of the fixtures on that Saturday so it may be on Sky – if not will have to rely on 5 Live. Think we’ll win but only after we’ve given at least one goal away, so 2-1 to United.

Fleet Street journeyman (nonsense, he was a mainstay of every paper, including The Daily Telegraph, that he worked on – ed) and lifelong Man United fan – even if the majority of it these days is done from an armchair. Currently working on www.fish2fork.com – the world’s first sustainable seafood restaurant guide which rates restaurants according to their sustainability policies.

The Sunderland v Man Utd Who are You? continues tomorrow with the return of Scott from the Republik of Mancunia site

3 thoughts on “Manchester United: the gods – and divers – of Old Trafford”