Once more the manager finds positives in a game where the result ultimately disappointed the fans. Lapses at both ends proved costly but MON remains upbeat. These last few games must be making his mind up about some key decisions, but he is keeping his powder dry.

We had some great chances.
I thought they were relatively simple and you have to be able to take one or two of those to win a game; if not you’re in trouble – and that’s what happened today.
It was frustrating to score such a magnificent goal and then for Fulham to score so quickly afterwards.
Overall, the performance was strong. The players wanted the ball, which was very encouraging but it was frustrating. Other than put the ball in the net, there’s not much more we could have done. 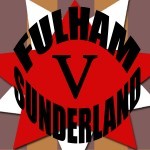 We scored a really great goal, the players celebrated and at that point their concentration was at its lowest ebb.
We needed to be ready, but we weren’t and within 10 seconds of kicking off Fulham scored.
The two subs, Bendtner and Campbell, both had very good chances and missed them. Sometimes that happens. There’ll be times it goes the other way and if they had gone in our favour we would have reversed the scoreline.