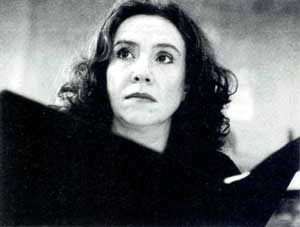 Don’t tell our regular contributor Bill Taylor, since he thought the film was sentimental, cliche-ridden rubbish, but Salut! Sunderland has a lot of time for Brassed Off and all who sailed in it. And especially for Melanie Hill, who played Mrs Coco the Scab and is generally a terrific actress AND a lifelong supporter of Sunderland …

Tonight, for readers in the North East or able to see BBC regional programmes online, there is a chance to see Melanie telling the story of the seven venues on Wearside where the Lads played before the move to the Stadium of Light in 1997. BBC 1 at 7.30pm are the place and time.

The programme is in the Inside Out series and describes the Sunderland Blue Plaques Project, a SAFC Supporters’ Association scheme to put up commemorative plaques at all those grounds, starting with the Blue House Field in Hendon.

That is where Sunderland’s first home game was played after the club’s formation in 1879, and it may surprise some that neither Colin Randall nor Pete Sixsmith was present to report on events.

The programme apparently includes some rare footage of SAFC and I’d be delighted to hear from anyone who watches it.

For newish Salut! Sunderland readers, or those who just like little reminders of decent features from the past, this a reproduction of the interview with Melanie originally published in Wear Down South, magazine of the London and SE branch of the SAFCSA:

Melanie Hill: flirting on the Fulwell

This starts as a tale of two celebrities with strong Sunderland links, of one door opening while the echo of another slamming shut is ringing in the ears.

Peter Reid’s reign had three-and-a-half days to run when a letter arrived in the elegant handwriting of Gina McKee, distinguished star of Notting Hill, Our Friends From the North, Whatever Happened to Jimmy Grimble and The Forsyte Saga but best of all, from our selfish viewpoint, superb narrator of the fly-on-the-wall series about SAFC, Premier Passions. The message was polite but firm; fully 20 months after our first request to her agent, Gina was declining an interview.

While we were still nursing a nasty case of bruised pride, the phone rang. It was Melanie Hill, another actress with a fine reputation, built in her case on roles in Bread, The Playing Field and that wonderful study of a pit closure, Brassed Off. Our approach to Melanie’s agent had been made only days earlier. “It’d be a pleasure,” she said.

The quite different responses should not be held against Gina. She provided her voice-over for Premier Passions without going on location and, beyond having SAFC fans as father and brother, claims no close personal interest in the club. “A fan by proxy” is how her agent had described her in the initial rebuff.

Melanie, on the other hand, was a supporter from the age of six, when her grandfather took her – along with a little chair to stand on – to her first match.

Her love of the club is undiminished even though she is not these days able to attend many games; her passion was diluted only by marriage to Sean Bean, who made her watch Sheffield United (without even the saving grace of Jody Craddock on loan).

The marriage produced two girls, Lorna and Molly, who plainly bring Melanie much pride and joy, but ended in a burst of tabloid-fuelled acrimony. Its collapse did not, however, end her affection for the Blades – not least because her boyfriend, James Daly, who produced When Saturday Comes (starring both Bean and Melanie), is one, too.

But back to her Roker youth. She has lots of memories about the people she knew or met or fancied at football, but they were all in the crowd. She remembers little about the games and, though she has been to the Stadium of Light, can barely recollect what happened even there.

Pressed for names, she mentions Bobby Kerr and poor Mel Holden. Mel, she says, was “such a great character” on the field; she didn’t realise, and I had forgotten until I looked it up, that he was struck down by illness, dying at the appallingly early age of 26.

Melanie’s best SAFC moment came after the family moved briefly to Kent. Now 5573 is a collection of numbers that might strike a chord with a few supporters. Melanie’s May 5 1973 was spent at home in Gillingham watching Sunderland 1 Leeds Utd 0 on the box as her mother went off to meet Uncle David, who had got her a ticket.

“I can still see her that evening, staggering down the street half-cut in the red PVC coat she’d bought specially for the cup final, and carrying a fake cup and a flag. Goodness knows what the neighbours thought. They wouldn’t have understood, but even now I love to think of it…it’s so brilliant to have a memory like that of your mother.”

Through no fault of her own, Melanie was born in Brighton (I cannot get remotely snooty about this since I went one step worse and chose Hove) in 1962. We contrived quite separately to escape north in the first year of our lives, in Melanie’s case back to her mother’s native Sunderland.

After the first visit to Roker Park, she started going with her mother, a teacher, and later on her own. Always the Fulwell, standing in front of a crush barrier to avoid being knocked over. “I just remember the atmosphere,” she says. “You cannot beat going to a big game and hearing all that noise. Our supporters were brilliant and so vocal – usually, anyway. It’s not the same in all-seater stadiums.”

Then came the move to Kent because her dad was a soldier in the Royal Engineers. Back in Sunderland after a year Melanie started going again. “There was a lad called Graham who I fancied like hell…..a sixth-former, unfortunately, way older than me. I admired him from afar.”

At Monkwearmouth school, she was given a small part in a play, playing a slave in The Crucible. No-one else wanted the role but she had a great time and began to see a future in it. Next year it was the lead part in The Blood Wedding and she was accepted by the Royal Academy of Dramatic Art. London, after the North East, was “horrible”. “I really hated it for the first six months but I’m glad I stuck it out now.”

It gave her the grounding for an impressive career that has failed, she says with emphasis, to make her a luvvie. She is proud of her role in Hot Money, a TV film about three women who robbed the Bank of England. She appeared with David Suchet in NCS Manhunt. Then there was Aveline Boswell in Bread, one series of Auf Weidersehen Pet, several of The Playing Field – first as a player in a women’s football team, later physio – and, of course, Brassed Off. As Mrs Coco the Scab.

No one who saw the film will need an explanation. For others, Coco – played by Stephen Tompkinson – was the miner reduced to making ends meet as a clown at children’s parties. Virtually the whole cast, Melanie recalls, was in tears when Peter Postlethwaite recorded, in one take, that thundering speech in the Royal Albert Hall after rising from his sick bed to lead the doomed colliery’s brass band to victory in a national competition.

There hasn’t been much time for SAFC in Melanie’s adult life. A couple of games at the Stadium of Light, televised matches down the pub, a stadium tour for her mother, boyfriend and daughters. And lots of Sheffield United as Mrs Bean. “It started because I had to go. I had no choice because what he said went. But I do have a soft spot for them. I like their supporters and always had tremendous respect for Dave Bassett.”

From what she knows, she believes it was time for Reidy to go “though he was let down by the players”. Howard Wilkinson’s appointment mystified her. But talking about the Lads had brought back memories, and got her thinking about going to a game again soon. When I tell her the story of Gina and Premier Passions, she allows herself a touch of mock jealousy. “I’m just miffed they didn’t ask me to do it.”

* Even five years on, I remember Melanie as not only a great subject for the Wear Down South Celebrity Supporter but friendly, too. We met up for drinks, a bite to eat and a match, producing a rare point (they were collectors’ items that season) – 1-1 thanks to an even rarer phenomenon (a Tore Andre Flo goal) at Charlton. Fast forward to 2007 – we met again, a few seats apart at the Emirates stadium when we played Arsenal. Melanie was recently granted an honorary fellowship of Sunderland University.

1 thought on “Melanie Hill, flirt of the Fulwell, catches the eye”

Next Post
Molineux Soapbox: how not to keep Wolves from the door