John McCormick writes: I hate Monday games. I always have. I never expect us to do well in any televised game but I have the worst forebodings on Mondays. So it came as no surprise to me that we got nothing today.

But the nature of that nothing – that wasn’t something I expected. I gather that it also came as a shock to our new manager judging by the letter he sent to M Salut (and perhaps a couple of others) immediately after the game: 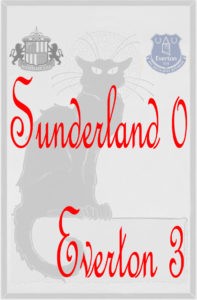 I thought we did well in the first half; we looked as likely as Everton to get a goal in that opening period.

Come the second half Everton were in the game a lot more and we made some basic defending errors and they cost us.

We didn’t stop crosses, we weren’t in the right positions to defend and they should be simple things to do that we didn’t do well enough.

We’ve got a lot of youngsters in the side and one or two new faces; while they were culpable of some of the mistakes, a few of our more experienced players were at fault too. As a back four we did not do the basic things needed to stop a team when they’re attacking.

We need a team to give us a way to go forward, we’re still trying to find a way of playing that suits all of the players and we’re also waiting for players to come back from injury.

[Jan] Kirchhoff played for the first time today and it was good to have him back after a while out. We lost Steven Pienaar during the week with a hamstring injury, which was disappointing as he’s done well and we need players like him who keep the ball.

Overall tonight I’m most disappointed with our defending in the second half.

8 thoughts on “Moyes on the boys v Everton: “…I’m most disappointed with….””