This nostalgia drug is addictive. Take away football for a fortnight, replace it with international yawns and the mind starts wandering back through the years.

Joe Simpson, Sunderland fan and actor (Coronation Street, the Syndicate, Emmerdale, OverBlood, Blood Warriors and much more), was born John. When the time came to join Equity, they already had one John Simpson. So he partly renamed himself in honour of one of his favourite players, Joe Bolton*. Another Sunderland man who caught the eye of John/Joe was Darren Williams. 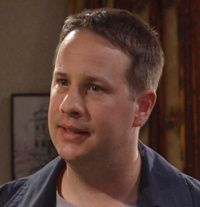 Today (April 17 2007 – Ed is a special day for all Sunderland fans, a day to pause and think and remember a great moment in our history.

Yes, as I’m sure you are all aware, it is (was – Ed) precisely 10 years to the day since Darren Williams scored the winner against some Yorkshire club from up the road who seem to think they are from the North East – 1-0 to the Sunderland and the smog monsters were virtually relegated. And it looked like we might be safe….well at least it did that day.

How do I remember this so clearly? Well it’s also my 10th wedding anniversary today and some things just seem to stick in your mind.

I not sure how many times Darren Williams has had a mention in a groom’s wedding speech but he did that day and, partly because of that, in my eyes Dazza could do no wrong.

Now don’t start screaming at your computer screens. I’m not trying to claim that he was the greatest player ever to wear the Red and White stripes.

But I do think he was often used as a scapegoat and various sections of the crowd used to get on his back. And Dazza, for me, was class and that was because he was a great squad player.

Christ, he probably wouldn’t have moaned if he was told he was playing in goal. He just always gave 100 per cent and for this I appreciated him, plus the fact that he always – and I mean ALWAYS – was the last player off the pitch having spent several hours personally thanking each fan who had travelled that day.

Or so it seemed. He always applauded the travelling fans and made you feel that you were appreciated.

A habit that apparently dies hard – and because of this, he has the nickname “Clapper” at Hartlepool*.

So then raise a glass and remember that goal and remember Dazza as a fine, fine servant to the Red & White cause. And of course, congratulations on your recent promotion with the monkey hangers.

Better sign off now. Where will I find a florists open at this time ……………?

* Salut! Sunderland note: a variation of the nickname – Dazza or Darren Handclap – originated during his Sunderland days, certainly in A Love Supreme and perhaps among the wider fan base.

** This is what Joe Simpson said about his choice of name when I interviewed him long ago for Wear Down South, newsletter of the London and SE supporters’ association branch:

The hardest man in the history of the world:

My memory of strict detail – who scored scorelines and so on – is appalling. But I do remember players. Bobby Kerr, Stan Cummins, Gary Rowell of course. Even rubbish players. Wayne Entwistle, for some reason. He always played badly when I saw him. And Bob Lee.

But with Joe Bolton, I suppose it’s because I always played as a defender myself, the sort who’d get a nose bleed crossing the halfway line. I just loved his attitude, the way he’d clatter people into the Clock Stand. He’d slither into a tackle, get cut to ribbons and pick himself up again while the other guy had a long session with the magic sponge.

I know you need flair players, but fans take to heart those who have that do-or-die approach that epitomises the Sunderland spirit. I was upset when Chris Makin left, and Rae and Bally. All of them were players the fans think bloody cared about us winning. That’s why the whole Hutchison thing upset me, when I think back to him scoring at St James’ Park and kissing the badge.

Next Post
Eric Roy: fond memories, not just of the assist that flattened Chelsea