In the first part of this week’s ‘Who are You?’ feature – https://safc.blog/2014/03/norwich-city-v-safc-who-are-you-1-tribute-to-duncan-forbes/ – the Very Rev Christopher Dalliston*, the Norwich-supporting Dean of Newcastle Cathedral, spoke about a Canaries stalwart, Duncan ‘Six foot two, eyes of blue’ – Forbes, and the Alzheimer’s disease that afflicts him. Here are his answers to a few of the customary questions; Luis Suarez has little to do with either side, apart from scoring against us but it’s a lovely quote. We initially forgot to ask for his scoreline prediction which may well have been a Freudian slip, but he now reckons 1-1 – ‘no use to anyone except probably better for you!’ …

Salut! Sunderland: The relegation battle is desperately close. Have Norwich City enough about them to stay clear – and how do you see Sunderland faring in the final lap?

Chris: I think Norwich are in a very dangerous place right now – the inability to score – notwithstanding the two late goals gifted us last week end (notably only the third time all season we’ve managed to score more than once in a game) has put us in real danger.

There seem to be no real leaders in the team, we play defensively but regularly ship goals. Against Southampton – a useful team admittedly – the defence was an utter shambles. I don’t think Chris Hughton really knows what his best team is.

The game against Sunderland will possibly be the defining moment in both our seasons – it is hugely important. So far we have managed to scrape 1-0 wins when it really mattered but I sense our luck may just be about to run out. As for Sunderland: will all the excitement of the Cup runs catch up with you as it did for Wigan last season? Somehow I think you will pull through.

What do you make of the team’s performances this season?

I think I’ve said it already. But just to amplify. Predictable, pedestrian and prone to errors. That’s it really.

Have you managed to see much of them? We’ve had a grim season and Norwich have pulled a couple of seriously good home wins out of the bag but also shipped lots of goals – is Chris Hughton really the man for the job?

I’ve seen a bit of them on the TV – unfortunately I had an operation on my foot in the autumn and the only live game has been the Newcastle game – on crutches! That said I looked more mobile than most of our team.

As for Chris Hughton – no I don’t believe he is the right man for the job. We have gone backwards under his stewardship. He’s defensively minded but even our defence has often looked all at sea – there rarely seems a Plan B – and only once this season have we come from behind to win.

Hoolahan has been largely frozen out of the side – but was then picked after he’d made a huge public fuss. Even the Luciano Becchio the forgotten man of Carrow Road got a couple of games after complaining. That doesn’t speak either of conviction or good management. Disillusioned I’m afraid but it’s too late to do anything this season.

What makes you despair of modern football and what truly inspires you?

I despair of the huge disparity in wealth. Twenty-one years ago we gave the Premiership a good go. Top in March 1993 we finished third. Totally inconceivable now and I don’t think that’s healthy for the game. On the other hand there are some spectacular players in the league now with extraordinary skill. I might not invite Luis Suarez to my vicarage tea party but he’s scored some of the most sublime goals I’ve ever seen (a good number against us!).

Do you honestly enjoy a season fighting against the drop more than one pushing for promotion, winning games and scoring goals?

No! This is the most depressing season for a number of years although in part that’s because I sense we have decent players who are underperforming and don’t seem to care that much.

Give us your tips for top four in order and bottom three, with whatever that means for where our clubs will finish?

Top 4: tough to get the order right but I’ll go for Chelsea, Liverpool, Man City, Arsenal.

Bottom 3 even harder to predict but sadly its: Norwich, West Brom, Cardiff. I hope I’m proved wrong – about us anyway.

Brazil: Excited or a little too club-conscious to be bothered, or bothered just yet?·

I will be excited when the World Cup comes – it will help to ease the pain. At least we are unlikely to be burdened by great expectations. 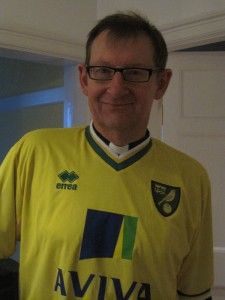 I’ve been at Newcastle Cathedral for over 10 years now and love the North East. We’ve got great plans to transform facilities at the Cathedral and make it a really special place to visit. Meanwhile this is my 46th year as a supporter. This year is also our 25th wedding anniversary and as I’m writing this my daughter is berating me for being able to remember that we beat Chelsea 2:0 on that happy day – my wedding day I mean!! (I’m definitely contemplating therapy).

Salut! Sunderland: Any memories of notable Sunderland-Norwich encounters of the past? Are you old enough to have been at Wembley for the famous Friendly Final?

I am and I was! I was a newly ordained curate then working in Essex. I jumped in the car straight after the Sunday service – dog collar and City scarf flying and bombed down the M11 passing all the Norwich coaches – I made praying gestures as I passed which as you can imagine got a laugh. The atmosphere was indeed friendly and though the match wasn’t a classic after two previous league cup Wembley disappointments in the seventies (both of which I was at) no one in green and yellow was complaining.

More recently there was another great night at the Stadium of Light last time we got promoted. You won 1-0 on the night securing a place in the play-offs but West Brom lost so we were champions anyway. Unusually everyone could celebrate that night and it was great to have all the Sunderland fans wishing us well in the Premier as we left the ground.

Next Post
Norwich City v SAFC ‘Who are You?’: (1) tribute to Duncan Forbes