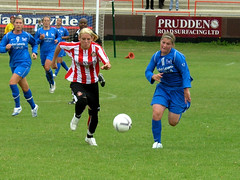 …..while proper football – except for the great SAFC v Mags scoreline you’ll see if you read on – takes a break.

No, I know it isn’t really a football-free weekend. And yes, I do want England to win (both games). I just don’t want it anything like as badly as I want Sunderland to best West Ham and Fulham and the rest.

I cannot work out why this is, because I have always disliked Leeds, but I want them to beat Orient, too.

It must have something to do with loving great football turnarounds. Ours last season wasn’t a bad example, come to think of it, and who else remembers the glorious failure of that relegation season when, after not scoring for weeks and weeks, we suddenly started walloping everyone in sight for a while? I’ll resolve this love-hate relationship by praying for Leeds to get within sight of automatic promotion only to stumble in the last few games and not quite make the playoffs.

Pete Sixsmith doesn’t care much for internationals either though, thanks to birthplace, his thoughts on Leeds may be a little more complex. But he’ll be at a match today – West Auckland versus someone or other – and you’ll hear all about it one day soon.

Me? Not sure who Abu Dhabi, my destination tomorrow, are playing this weekend but I suspect I’ll arrive too late anyway. But I’ll remember with some pleasure this scoreline………..

Well, that’s how it appeared on the message from Paul Saleh, posted to the Blackcats forum.

Were they without Michael Owen and Shay Given. We’d be forgiven for wondering, as “Stephen FTM” implied when he sent this reply: “The way you’ve written that, it looks like our lasses beat the Newcastle (male) first team.”

Next Post
When Mackem passion nearly muzzled the swaggering Gunners