M Salut writes: I find it slightly worrying that John McCormick has not yet produced one of his statistical projections showing how Sunderland will stay up. Silence speaks volumes? Ordinary Jon, aka Jon Adamson**, has been conducting an exercise of his own and finds reasons for hope as well as concern – concern that would rocket in the event of a bad outcome of Norwich vs SAFC on Saturday …

I previously raided my step-daughter’s extensive range of coloured pencils to produce a sparkline showing the League results of the bottom seven teams.

Sparklines are “intense, simple, word-sized graphics” commonly seen in FTSE reports or medical records (see footnote). I’m a bit of nerd so this is the sort of thing I enjoy doing in my spare time. I really ought to work out how to create these in Excel or Tableau or something, although I do quite like the low-fi pencil approach if I’m honest. 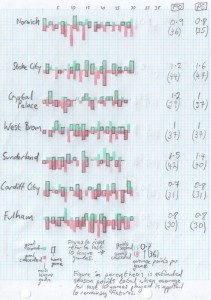 Anyway, I thought I’d update it following the last round of Premier League fixtures. The relegation battle still looks too close to call and, as a Sunderland fan, I was hoping that if I looked hard enough I might find some hope in the stats. Or as economist Ronald Coarse more eloquently and succinctly put it, “if you torture data long enough it will confess to anything”. …even to Sunderland surviving relegation perhaps?

Reasons for Sunderland fans to be optimistic:

Of the bottom ten teams in the Premier League only West Ham accrued more points over the last 10 league games – 16 points compared to Sunderland’s 15 points. The same two teams scored the highest number of goals (14) and were the only two sides in the bottom 10 with a positive goal difference during that period (+2 for Sunderland and +4 for West Ham).

If you were to apply the average points per game for the last 10 league games to the number of games which each side has left to play, Sunderland would survive comfortably on 42 points with Fulham (30), Cardiff (31) and Norwich (36) the sides to go down.

So, how does it change if we just look at the last 5 games of the season? Well, the picture doesn’t chaneg a great deal to be honest:

Even if we look at just the last 5 league games, out of the bottom 10 sides, only West Ham (9pts) and Stoke (8) accrued more points than Sunderland (7), despite Sunderland being amongst the lowest scorers.

Again, the points per game ratio based on the last 5 league games suggests Sunderland will survive with the magical 40 points, with Fulham (30), Cardiff (31) and Norwich (35) being relegated.

This made me think, so why do I feel a little depressed about Sunderland’s chances of survival? Well, the obvious thing is recency – the last league result was not great for Sunderland. However, if a 0-0 draw gets you feeling depressed then you either need to stop watching football or, at the very least, stop supporting Sunderland; they are too many opportunities to be depressed about losing games without getting depressed about draws.

The pessimism might also be, in some part, because this was one of the fixtures identified as ‘winnable’ in Sunderland’s battle to stay in the Premiership and play more exciting games like this next year. However, without wishing to point to the obvious, all games are winnable. Indeed, Sunderland have beaten Everton, Newcastle (twice, in case anyone has forgotten) and Man City – whilst being comfortably beaten by Palace, Swansea and Hull (to name a few).

I originally drew this a couple of weeks ago and have just updated it but even in that relatively short period back-to-back wins for Stoke have made their inclusion here seem incongruous – such is the difference two wins can make! Conversely, I could perhaps now include Swansea, although I think West Ham, Villa and Hull have probably got enough points on the board to see them safe now.

There are lots of different ways of trying to predict how the league table will end up. None of them will get it right because, thankfully, football is not predictable (and I say that after the most predictable 0-0 draw between my team, Sunderland, and Palace) but such models can show up some interesting trends and points for discussion. Another example I particularly like is the comparison of like-for-like fixtures last year and this. The always interesting @cacollinson and @simongleave are both worth a follow if you like this sort of thing.

* A footnote on Sparklines

I chose to use sparklines to present the data here. These sparklines show each goal scored scored in every league game for (green) and against (red), with home games outlined with a border.

Crystal Palace’s sparkline is fairly flat, reflecting just 57 league goals scored in 29 League games they have played in – the only side with a goals per game ratio below 2 (1.97). Palace have only scored more than once in just 3 league games this season, winning on each occasion.
Conversely, Fulham have much more colour on their sparkline, and more red than green, reflecting the only goals per game ratio of teams in the bottom half of the table which is above 3 (3.17).

The figure to the right hand side of each sparkline shows important summary information: in this case it is the points average for the last 10 games [P10] and the last 5 games [P10]. The figure in brackets shows the predicted season points total if the average for the last 10 and 5 games were applied to the remaining fixtures of the season and added to the points accrued so far. 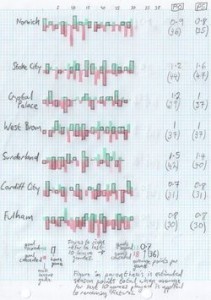 ** Ordinary Jon’s blog can be seen at http://www.ordinaryjon.com/1/post/2014/03/predictable-positions-fulham-cardiff-and-norwich-for-the-drop.html

Next Post
Keir’s Player Ratings: ‘amid the frustration versus Crystal Palace, Arise Alonso’