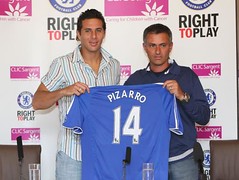 What, asks the Chelsea fans’ blog Chelsea Pies, is Claudio Pizarro for?

Why didn’t they ask Liam Miller the same question? If Pizarro has a point, it is presumably the one on his knee that he poked sneakily into Miller after the latter had the gross impertinence to tackle John Terry.

And if he can get clean away with that, as seems to be the case, the Peruvian player is clearly a great asset to the London club or, as I prefer to call it, brand.

With this seal of approval from Salut! Sunderland to counter those backbiting, ungrateful cynics who support his own team, our Claudio must be left feeling something along the lines of “some you win, some you lose”.

He wins our unstinting admiration for the supreme professionalism he displayed in hoodwinking the match referee Peter Walton when he committed a red card offence that somehow escaped the collective attention of Londoncentric football writers and, if Joan Dawson is right, Match of the Day.

But he remains in a spot of bother not just with Chelsea Pies, but the Peruvian football authorities, which have just banned him for his (alleged) eager participation in another knees up – what our own dear Sun coyly calls a sex romp in the team hotel before helping his country go down, as it were, 5-1 to Ecuador.

Poor Claudio. Poor Peru, to be deprived of such a class act. But how heartening to know that in this cruel, unforgiving world, he has small mercies to be thankful for. And let’s hear it for the good old FA, so often accused of being run by woodentops, for taking such a benevolent view of the sly, yobbish assault on Miller, without which nothing else would have happened and no one would have been sent off.

Who cares about the worthy procedures that exist for punishing such miscreants when their nastiness is missed by the match officials but revealed by the cameras? “Big” clubs and their players must be protected from newly promoted upstarts. And shame on you Sky for trying to spoil everything!