Monsieur Salut writes: sometimes, Salut! Sunderland struggles to find anyone supporting an opposing side to do the ‘Who are You?’ interview. Sometimes – not often – we receive a cast-iron promise, send out the questions and wait in vain for responses. And then there are the times we are overwhelmed with offers. Port Vale is one such example. Let’s hear from Ally Simcock*, former chairman [sorry, M Salut is too old to be doing with chairs as people] of the supporters’ club, a prolific writer on all things Vale and now a supporters’ liaison officer with the club. She reveals a Sunderland connection that goes right to the top of her club … and I have promised a third volunteer, Lisa Bowker, that I’ll be back with questions if it goes to the replay Ally predicts …

Salut! Sunderland: how big a game is this for you? I’ve seen a lot of excitement among Port Vale supporters on social media

Ally Simcock: this is a huge game for us. It’s a chance to start a cup run; it is a lucrative fixture with the chance of a big crowd and money from the TV!

Tell us about your owner and chairman, Norman Smurthwaite

His dad and family are from Sunderland, including the most important woman in his life, his Aunty June.

He owned a business in the North East between 1999 and 2007, where his workforce was split equally between Sunderland and Newcastle fans. He held a Sunderland season ticket for seven seasons. He is an extremely passionate person who doesn’t suffer fools gladly!

Just above relegation zone last season, midtable in League Two now. Is Neil Aspin the man to lead you to higher things?

Neil came to us when we were in a downward spiral. We narrowly escaped relegation last season and the whole club was under a black cloud. There was a huge buzz around the place when Neil was recruited as he is a former Vale legend in the eyes of many.

He also brought with him the expert knowledge of John Rudge, a hugely successful manager in his time. There was no real expectation for Aspin to make dramatic change last season, but this season the fans have started to expect results and quickly. Realistically, we need to give him time. He tried to change his playing squad almost completely at the beginning of the season, whereas most Managers would be only adding a couple of players to an existing core squad. Teams need time to settle. I don’t think it’s fair to judge Aspin quite yet.

And how high can Vale realistically aim?

I think a high midtable place should be our aim this season. Then next season we should be aiming for the play offs.

You’re not named after a single geographic location but is there true community pride in Port Vale despite any local temptation to support bigger clubs?

We are one of two professional clubs within the city of Stoke on Trent and we held our own for many a season, until Stoke City broke away and reached the dizzy heights of the Premiership. Port Vale fans have true pride in our team and we have proven this during numerous turbulent times over the years. We have a lot of history, we have a big ground and most of all, we are a family.

What have been your own highs as a supporter?

I have been to Wembley three times to watch my team play and to Millennium Stadium once. We won the Autoglass Trophy in 1993 and LDV Vans trophy in 2001.

From the three Wembley trips, I saw two losses. One playoff final and one Anglo-Italian Cup final. It’s a long trip down south if you lose! Plus, we have been in administration twice, which is very stressful.

Who has given you the most pleasure in Vale’s colours?

I loved to watch our nippy wingers, John McCarthy and Steve Guppy, during our 90s heyday.

And who should have been allowed nowhere near Vale Park?

I am tempted to say Ville Viljanen, a very clumsy and inadequate Finnish striker. However, I cannot ignore Exodus Geohaghan, who was a very tall defender who was strangely played in midfield with a popular midfielder dropped in his favour. He was a Jim Gannon signing, who should also never have been allowed near Vale Park!

We had enough trouble getting familiar with our own rebuilt squad. Who shines among yours?

We have a few shining stars in our squad, none more so than Vale fan Tom Pope, who has one of the highest goal scoring records in Club history.

Did Sunderland’s sharp decline surprise you?

Yes absolutely. Sunderland has always been a big club, with a large fan base and a spectacular stadium. It’s a club I tend to associate with the top leagues.

Any other thoughts on the club the fan, the city and region, Jack Ross?

I have spoken with a lot of Sunderland fans over the years and there are quite a few locally who moved to Stoke to work in the pits. They tend to be friendly and humorous, whilst being some of the most passionate fans around. Jack Ross did really well in Scottish football. Let’s hope he continues this during his time with the Black Cats.

Hand on heart where will our clubs finish this season in their respective divisions?

Port Vale will finish midtable. Sunderland should be promoted.

Will VAR or any other measure ever eliminate diving and other forms of cheating? Is it an issue in your division?

I think it is an issue in every division. Some clubs rely on it more than they do their own skill set. I feel there is definitely a case for VAR to be considered, but we would have to iron out the kinks before it can be rolled out. I was in Russia for the World Cup and we were unaware of when VAR was being used. It can lead to big delays and we don’t want it to ruin the game, just enhance it a little.

The World Cup: a fading memory or something to savour until the next one?

The World Cup was amazing and we did really well. We have to remember our team was a young one and they did exceptionally well to get as far as they did. I loved Russia, the whole experience was positive. Whether we can take that forward into the next World Cup remains to be seen. It should boost the confidence of the players and the fans though, so anything is possible.

I most certainly will be there, I can’t wait! I reckon it could be a 2-2 draw, with a Stadium of Light replay. 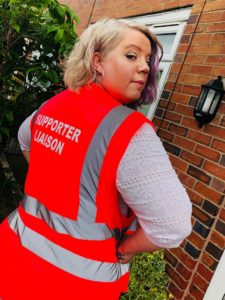 * Ally Simcock on herself: I am a Supporter Liaison Officer for Port Vale FC and was previously chair of the official Supporters’ Club. I sit on the National Council for the Football Supporters Federation, I am the fan representative on the fixtures working party and I am a co-opted Supporters Direct Board Member. I have been a Vale fan since I was five, despite being born and going to school very close to Stoke City FC. A neighbour brought me to Vale Park first and I was hooked. I received a lot of ribbing at school as Vale fans were few and far between at my end of the city. It was worth it though! I also write for our local newspaper once a week, about football of course.

1 thought on “Port Vale vs SAFC: another Who are You?, a big Sunderland connection”

Next Post
Anything Raheem Sterling can do, Leon Osman did better for Everton