Malcolm Dawson writes….I should’ve been there but prior commitments meant that I had to be in Lytham St Annes by 3.30. Going to the ground was not an option. Watching at home would have been pushing it as it takes me 2 hours 15 minutes to drive there. So I left at 9.30 and got to my hotel in time for Kick Off and a seat in the bar. How was I to know that there was a kid’s birthday party in the adjacent ballroom, so I watched the first half to the excited squeals of assorted 6 and 7 year olds and a “children’s entertainer” whose role model must have been Timmy Mallett on acid. Thank you Sky! But still despite not being able to hear the Serbian commentary, I rejoiced in Wickham’s goal and smiled at the penalty award and the sending off. For once things were going our way. At half time I wandered around the corner knowing the second half was being televised in the pub there and accepted the compliments of the Liverpool fans who’d come to see their side demolish Chelsea. Oh the fickle hand of football. When the third goal went in I started to relax but as we know the job is not finished yet. After some of the disappointing games I’ve sat through at the Stadium of Light it was disappointing to miss this one but I should be there for West Brom and Swansea. In his post match e-mail to M Salut and others the manager reflects on the part the crowd played today, praises his players and asks for more of the same.

I think the connection between the fans and the players in the first 20 minutes was incredible and that helped us.

We’ve been talking for some time about how we needed something to happen and that time has come today.  For me the whole day has been superb, from the first goal to the penalty decision and it’s something we’ve been waiting for.

Probably one of the best decisions I’ve ever seen from a referee [on the penalty] the player didn’t go down and it was an outstanding decision. The idea is that if you don’t go down you don’t get a penalty, you don’t want players to go down and today that has been proven by the ref; it’s fantastic for football. I’ve no doubt it was a penalty. I can’t remember a better decision from a referee, as a player and as a manager.

At half time I said we weren’t to sit back, we wanted another goal and we wanted to keep a clean sheet; they’re both just as important. 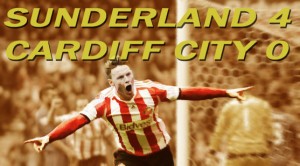 Scoring our third goal was important for the crowd and they were incredible for the players today.

Connor [Wickham] is doing well. For his size he should be scoring headers; his first one was outstanding. After the ball bounces in front of you it’s a difficult thing to get a head to it, I know from when I was a player, he did superbly.

I’d like to say a big thank you to the fans, the atmosphere was incredible.

When this stadium is full it’s very difficult for the opposition to play against that noise. I think we need exactly the same in 10 days’ time; I invite them all back then to do exactly the same!

I’m not getting carried away but seven points from the last three games is incredible.