Malcolm Dawson writes… I can’t believe that there will be any visitors to this site who are not already aware that earlier today Bradley Lowery lost his battle with neuroblastoma, a particularly aggressive form of cancer. Although it has been apparent for several days now that Bradley’s time was limited it is still devastating news for his dad Carl, mam Gemma, brother Kieran the rest of his family and their friends.

Their campaign, which began initially to raise enough funds to send Bradley for an expensive course of treatment, soon caught the imagination of Sunderland AFC, then the whole of the football community and the wider world. Ultimately though, this couldn’t produce the hoped for miracle and whilst nothing will replace the loss of this lovely little lad, it has provided Bradley’s family with some magical memories that will allow them to recall the good times as well as the sadness of his passing. 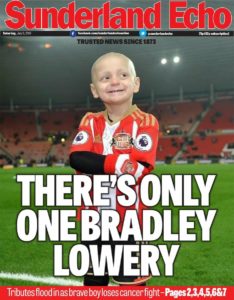 Days such as these should serve to remind us all that football is just a game, but one that has the ability to stir emotions and bring the best out of people. I’m sure that this will provide some comfort at this saddest of times.

The family have stated their intention to set up The Bradley Lowery Trust, to support other children and their families who find themselves having to deal with the issues that such a virulent condition brings and to further raise public awareness of childhood cancers. This will be a fitting legacy and hopefully in years to come those who knew Bradley best will recall the happy times and the way this little boy touched the hearts of millions, still smiling whilst coping with the effects of such a terrible illness.

1 thought on “RIP Bradley Lowery: the little boy with the big smile”