Goodison Park, Boxing Day. It was backs to the wall against 10 men after a good first half that should have produced another goal, but the win gave us all hope. Despite our helping of cup glory, it’s been mostly downhill since then and we stand at the gates of doom. Not so Everton, playing out of their skins, scoring for fun and chasing Liverpool up the Premier League. Why, they don’t even need their own refinement of the Whitefall farce, imaginary fouls on Leon Osman, to fool Howard Webb and gain points any more. Barry Cass* is a happy Evertonian who co-hosts a local radio programme, The Footy Show KCC, contributes to Everton discussions on Radio City and runs the mainly Everton-related website, Footyscene …

Sunderland and Everton supporters are cordially invited to Guess the Score: https://safc.blog/2014/04/sunderland-vs-everton-guess-the-score-stick-to-football-not-cricket-figures/

Salut! Sunderland: We seem doomed save for a miracle, but you’ve had a strong season so far: has Martinez been a breath of fresh air whatever credit Moyes deserved for past efforts?

Barry: Roberto Martinez has been fantastic since day one when he was unveiled. I have to admit that before he was appointed I wanted us to go after a Thomas Tuchel or someone of that ilk rather than Martinez but he’s been great and has given us the belief that we can go to the next level.

It should not be forgotten that David Moyes built some excellent foundations here but he was found wanting in the crucial games due to his cautious approach, Martinez is just the opposite and we as fans love him for it.

I was at Goodison and your 10 men played like 12 in the second half. Is that the spirit that has made a top four finish plausible and who have been the real stars?

Yeah I’m still scratching my head how you beat us that day ! Haha. Yes the team spirit at the club is fantastic but I also feel that we aren’t given the credit we deserve for having an excellent side. We are always in the top 7 and higher but the media are more interested in trying to sell our players on that actually recognising what a good squad we have.

The stars this season have been Gareth Barry, James McCarthy, Ross Barkley and Seamus Coleman. Yes Romelu Lukaku has done well as has Gerard Duelofeu in the games he has played in but the others have contributed far more.

I bet you didn’t mention Stuart Cooke, listed by the club as “spiritual healer”.

Defo didn’t mention Stuart but whatever he does it seems to be working!

Does it hurt that Liverpool have had an ever better season? What would it take to make you Merseyside top dogs again and recreate the great era of the 1980s?

It doesn’t hurt that Liverpool are doing so well but it certainly surprises me as I believe that apart from that front 3 of Suarez, Sturridge and Sterling there is probably only Gerrard who get into Everton’s team. They have been fantastic this season but Everton have been close to them for most of the season.

It would take us to be able to make Romelu Lukaku permanent (improbable) as well as buying another striker but I am not too worried as Martinez knows exactly what he wants and will deliver something special to Everton in my opinion. As for Liverpool I am doubtful that they will have as good a season next year unless they buy a new defence.

Bring us up to date on the stadium debate and give us an idea of the strength of feeling aroused.

The stadium issue is an ongoing one for Everton and at the moment the club’s stance is that they are preparing plans for the moment they get the go-ahead to build a new ground. The problem is that it costs money and that is something that we simply don’t have so unless a rich sheik buys us I wouldn’t be getting to excited about a new ground.

Personally, I would like us to redevelop Goodison Park as a first choice.

Playing us in current climate must seem like just what you needed in the run-in. Have you been surprised at how bad we’ve been all season in the league?

I never take any game for granted where Everton are concerned. Last season we were playing well and lost at your place surprisingly in my opinion as we normally do okay up there.

As for being surprised as to Sunderland’s form, yes I am a bit. I wasn’t a fan of Paulo Di Canio being in charge, far too much drama and not enough substance for me but I like Gus Poyet.

I watched the game against West Ham and I felt Sunderland were unfortunate not to get something out of the game but they haven’t been good enough in those games and that surprises me given that you have good players like Johnson, Fletcher, Ki etc

Those thrashings at Goodison and the FA Cup replay win at our place must figure high but do you have any other happy memories of playing us, or indeed sad or amusing ones?

The 7-1 in 2007 sticks in my mind for obvious reasons when Roy Keane was the gaffer.

But a game that surprised me was back in 1996 at Goodison Park when Everton were flying, we had just been tipped as outsiders for the title in December when the Mackems rocked up. I was expecting a routine home win and your boys stuffed us 3-1 with Michael Bridges scoring two I think, also remember Lionel Perez saving a pen in the game.

What thoughts do you have on Sunderland – the club, the region, the fans and past links between our clubs including Reid, Kilbane, Hutchison, Bracewell and – though hardly – McCann? There’ll be others I cannot instantly call to mind.

I have always quite liked Sunderland. I think I first noticed them from Roker Park when they had similar markings on the stands and they always struck me as a good, down to earth club. Roker Park was always a tough place to visit as well.

One thing I have to say is that I have always preferred Sunderland to Newcastle every day of the week and Sunderland are a bigger club, no doubt about it. Better history etc, just thought I would mention that.

Yes over the years we have had a link between players moving clubs, you didn’t mention John Oster although he didn’t exactly set the world on fire at either club. I loved Paul Bracewell and always wanted Sunderland to do well when Reidy was in charge, they had some side with Phillips and Quinn up top that’s for sure.

What have been your own highlights as an Everton supporter?

I am lucky enough to be of an age where I saw Everton win the title twice in the 1980’s as well as FA Cups and a European trophy so I would have to say those are the highlights as was the FA Cup win in 1995. We have always had some top players as well but we have waited too long for it to come around again but I definitely feel as though the club is on the verge of achieving something again especially with the kids we have coming through.

And the lowest points?

Any defeat to Liverpool !! Losing the FA Cup Final in 1985 when we would have won the treble. Also losing the 2009 FA Cup Final but to be honest over the last 20 years there has been a few low points !

Who are the greatest players you’ve seen – or wish you’d seen – in Evertonian blue and who should have been allowed nowhere near the shirt?

Neville Southall quite simply the greatest goalkeeper ever to play the game. That 85 side was special, Gary Lineker was fantastic and obviously Peter Beardsley was another fabulous player. Wayne Rooney has been the best we have produced but Ross Barkley will be better than Wayne. I’d have loved to have seen Dixie Dean and Alan Ball play for us.

Players who should never have played for us is tough but some ones I’d rather they hadn’t are Bret Angel, Espen Baardsen, Mitch Ward, Alex Nyarko, and John Spencer!

Name this season’s top four in order and also, he said with a wince, the bottom three.

1. Manchester City (crosses everything)
2. Liverpool
3. Chelsea
4. Arsenal (only just from us)

Assuming the worst, would we bounce straight back?

With Gus Poyet at the helm then it’s a definite for me. Keep players like Fletcher and Johnson and you would walk it next season and that allows Poyet to shape that side even more.

Does anything about the modern game truly inspire you? And what annoys or angers you the most?

Nothing inspires me as I think it has been taken over by greed. I don’t like that clubs are owned by people who just blow money on the side and I don’t like the fact that football is all about the money. Also the fact that the media only think that four teams exist in England is really annoying.

What does Brazil mean to you? Can’t wait or can’t wait for the Premier to return afterwards?

I am looking forward to the World Cup, not from an English point of view just the tournament in general. I want Brazil to win it if England don’t (rather when England don’t!). I wish Roy Hodgson would go with a youthful and exciting line up but I doubt it somehow.

No but I will be watching it. I am going for an Everton win 2-1 although it will be a tough game for us. 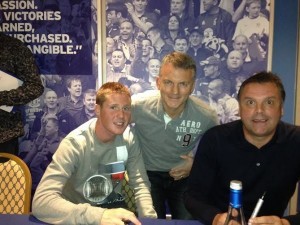 *Barry Cass on himself: I have been going to watch Everton for more than 30 years now. I own footyscene.com which is an Everton based football website I run with my site partner and it carries mainly Everton articles although we do have a general news section which covers other clubs.

I also co-host The Footy Show KCC which is a local football radio show and I am a contributor on Radio City’s The Blue Room discussing Everton FC.

Next Post
The Robson Report: what on earth happens next?