Tony Park* stood out among Manchester United supporters on Twitter, and elsewhere for that matter. I had not heard of him but his historian’s interest in the MUFC youth scheme and what becomes of its graduates marked him down as a someone with special rapport with the club and its tradition of nurturing young talent.

As a product of Tony’s knowledge and research, last year saw the appearance of Sons of United, a pictorial history of 80 years of the MUFC Youth Team which he co-authored with Steve Hobin. He seemed a great candidate for ‘Who are You?’ ahead of Sunday’s match and I am delighted he agreed to answer our questions …

Salut! Sunderland:
One of the grandest names in world football, but an ailing giant on last season’s evidence. Is van Gaal the man to restore MUFC to glory and, if so, how long will he need and will get the time required?

Well, I wouldn’t say an ‘ailing giant’ based on one poor season out of the last 22, but I think everyone is happy with the van Gaal appointment. He speaks clearly, has vision, a proven track record and all the players seem to like him. I was willing to give Moyes three years and it’s the same with this guy. Although I wouldn’t be surprised if he achieves success sooner. The important thing is to see progress.

Were you dubious about Moyes’s apppointment, despite SAF’s recommendation, or was he better than conventional wisdom would have us believe and just punished unfairly for needing more time?

I wasn’t dubious about Moyes at all. I’m a pretty philosophical supporter, and believe in cycles in the game – history has much backing evidence. So I actually predicted a 6th place finish and thought things would get worse before they got better. I was willing to give Moyes two-three seasons as long as we saw progress. He inherited an over-achieving squad and I guessed there would be issues. In the end this proved to be true. In addition Moyes proved unable to deal with the job so I suppose it’s better to cut your losses quickly. I think if he had a true vision and style then he may have fared better. In the end he was out of his depth. It happens.

Explain your special interest in the MUFC youth policy and its products? Is there still a major role for players ‘coming through’?

I was injured as a teenager and used to look at all the United programmes and read about kids my age and what they were doing. In 1979/80, our youth team reached the FA Youth Cup semi-final and I took a real interest in their progress. Then Scott McGarvey broke through to the first team. A year later, we reached the final v Watford with a fantastic team that included Norman Whiteside, Mark Hughes, Clayton Blackmore and lot’s of others. When all these players started to breakthrough I was hooked really.

In your experience, who have been the shining successes of the youth system and who surprised you, either by doing well or by faltering? 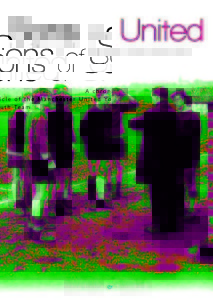 The one thing I have learned in following youth football since 1979, is that you are wrong more than you are right. I have seen only a handful of ‘certs’ in all my time (Whiteside, Giggs, Doherty, Butt, Morrison). Most of the others were ‘if everything goes right then they have a chance’. In terms of shining success, I would point to the likes Gary Neville and Darren Fletcher, unfashionable players who made careers through hard work. In terms of surprises, none who have become regulars has been a shock. Of those who faltered, maybe someone like Kieran Richardson.

Does MUFC’s status as a global brand, more these days than a football club, trouble you or are you perfectly happy to see support from millions who could barely place Manchester on a map?

I don’t have strong views on this. I was brought up in Australia so followed United from afar during my formative years. As a consequence I can relate to people who live thousands of miles away. I was probably more devoted then than many locals at the time. Since returning to the UK and living in Manchester I see both sides. The global brand only bothers me when commercialisation gets in the way. I think the club could do more for local fans. In terms of our support, I do wish some of them would research our history more…with the internet these days it’s not exactly difficult.

Among rather a lot of choices, what have been your high points as a Manchester United supporter?

Winning the league in 1993 after 26 years, the European Cup finals, seeing some amazing players at the club, some fantastic young players coming through.

Assess Sir Alex’s contribution to the club, compared if possible with previous managers going back to Sir Matt.

Ferguson did a few things. Firstly, he had a vision of what he wanted the club to be which was based on our youth policy. So he changed everything very quickly and build a new base. He demanded excellence from everyone. Mediocrity was not a choice. He didn’t sit back and reflect on the past but was very forward thinking. I also think he made decisions very quickly. Some were right and some wrong, but he moved on quickly. McGuinness was always overruled by Busby so didn’t stand a chance. O’Farrell lost the support of the dressing room and bought poorly. Very similar to Moyes. Docherty could have been more successful but his off-the-field antics proved his downfall. Sexton was rebuilding the youth system but his transfer dealings were horrendous. Atkinson didn’t care about the youth team or the structure of the club and discipline was poor. I think Ferguson (who has flaws), ticked most boxes. He was a true football man.

Lots of links between our clubs in recent years: O’Shea and Brown currently, Welbeck and Jonny Evans before them, Bruce and Keane, Dwight York, even David Bellion. I will have missed some (Bardsley hardly counts at senior level [as his United time was so anonymous] but you’ll have come across him). Special thoughts on any of them?

I always though Wes Brown was a superb player. But for his injury record he could have been world class. O’Shea is a good solid pro and Welbeck/Evans came back better players after their loans spell with you. So thanks! I don’t tend to follow the managerial exploits of our former players so no real opinion on them really.

We beat you twice last season, in cup and league, but escaped relegation by a whisker, however comfortable 14th ultimately looked. Were you taken aback by either our struggles or our revival?

No, not really. Turmoil at the top always makes it hard for teams to do well. I think Poyet is a good manager and keeps things simple which is half the battle. I always wonder about the psychology of players/teams who can raise their game against the big clubs but struggle against the others.

Again from a long list, name the players who have given you greatest pleasure or who you wish you’d seen.

Glenn Hoddle, Alan Devonshire, Dennis Bergkamp, Paul Gascoigne, Liam Brady, Peter Shilton, Thierry Henry. Probably one or two others but we have been lucky with some great stars over the years. [Interesting that the question originally specified United players and you see none in what is clearly Tony’s broader selection – Ed]

And who should have been allowed nowhere near Old Trafford?

Liam Miller. {I asked Tony to expand given Miller’s time at Sunderland – Ed] When he arrived very few knew anything about him after his time at Celtic. He also arrived at a pivotal time for us, along with Kleberson, Djemba-Djemba and Alan Smith. While the other three were very poor for us, at least you could see why they were bought even if they were clearly not of the calibre required.

Liam Miller, however, showed the least aptitude of a professional footballer that has ever pulled on a United jersey. Other youngsters were bought based on potential but turned out not good enoug (Bebe, Dong, Nevland, Djordjic) but Miller was an established international. In reality, he lacked pace, couldn’t tackle, his passing was mediocre and his contribution minimal. His nine league appearances for us were nine too many. He contributed very little in his time here and came across as a lower league footballer. A huge mistake.

Your minimum expectation for the coming season?

This season’s top four in order, and the relegated trio?

Top Four will be Manchester City, Chelsea, Manchester United, Arsenal. The three teams relegated will be Hull City, Burnley and QPR. Someone like Aston Villa might also shock.

Where will our sides finish if not included in your last reply?

United third and Sunderland just below the middle of the table. I don’t think you will have it so hard this year.

The season was all of 19 minutes old when Ibrahimovic dived to win a penalty for PSG. Is fighting against football’s cheats a lost cause and how much of it do you see permeating down to youth level?

Funnily enough you rarely see it at youth level. Most of the coaches are good with that sort of stuff. At United every now and then you might see a player do it. Then the coaching staff immediately take him off and we play the rest of the game with 10 players.They take honesty and fair play very seriously. I have to say most clubs are quite good with youth discipline. The refereeing is pretty good too.

As far as cheating in general is concerned, if the authorities had any balls and dealt with it properly it would eradicate most of the cheating. It’s not that difficult.

One measure you’d take to improve the matchday experience of the ordinary supporter?

Brazil 2014: a fading memory or a competition to remember?

A bit of both, some really good exciting games. The best team won playing good football. No real stars shone though.

Will you be at our game? What will be the score?
Got chubbed in the ballot so will watch it on TV. I always fancy United to win but our defence still needs tweaking so I will go with 2-1 to United.

* Tony Park on himself:
I grew up in a football mad household with my Scottish father, a fanatical Celtic and Denis Law fan, while my Cockney mother supported Millwall. I was so indoctrinated by my father about Denis Law I started supporting United in the late 1960s. Once the family moved to Sydney I would do everything possible to listen to matches (BBC World Service at 2:00am), get stuff sent over from England and so on. No internet in those days so it was tough. I moved back to England in 1987 and got a season ticket in 1989. I was home and away until the mid-1990’s when my job meant a lot of travel and I had to forgo away matches. These days I get to most United Academy games, Reserve games, all home first team and away games when I can get a ticket.

Last year saw the publication of a book I co-wrote called Sons of United. It is a 600-page pictorial history of the Manchester United Youth Team (1932-2012). I am also an avid memorabilia collector and have an extensive collection of United stuff going back to the early 1900s. I live in in the village of Marple Bridge in Cheshire with my girlfriend and our two dogs. I have my own consultancy company which takes me all over the world.

8 thoughts on “SAFC-Manchester United ‘Who are You?’: Fergie, Moyes, LVG – and Liam Miller”