Decades of Sunderland support should bring an element of gallows humour to anyone’s personality. If our situation were not so dire, or so familiar, it would be wall-to-wall fun, which it isn’t.

But I’ve still enjoyed the doom-laden banter here since Bradford (actually you could insert your own team name after “since” as there have been so many: Watford, West Ham, Notts Co, Wimbledon, Brentford, Southampton, Palace, QPR, Everton, Ipswich, Norwich all spring to mind and I have barely begun).

But Pete Sixsmith’s threatened defection has propelled Salut! Sunderland‘s board into action. Monsieur Salut will be an East Stand presence on Saturday, ahead of his own desperate flight to France, and will be ready to report on Sixer’s demeanour with a view to keeping season ticket renewals staff informed.

I recently amused fellow-holidaymakers in Cuba with a colloquial French put-down for less than manly men: hommelet(te)s, pronounced without the “h” like those things you fry with eggs. Can the Lads rise above the suspicion that hommelet(te) is a cap that fits?

Forget, for a moment, Pete’s profound unhappiness; as a man who has supported his club home and away for 50 years, his disenchantment is something that Ellis Short ought to take seriously with slap-up lunch in the boardroom as a starting point, and an end to half a century of under-achievement as non-negotiable. But the boss’s response will be to tell Sixer that if he wants fantasy, he should be off the seem 50 Shade of Grey. 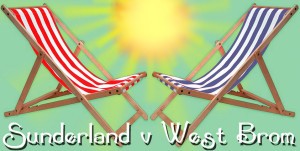 Let us see if the traditional Guess the Score optimism has survived QPR and Bradford. Will everyone plump for a home win, nervy or emphatic?

Over to you – with Baggies warmly invited to get stuck in, too. The first to post the correct scoreline, before kickoff, wins the Personalised Football Gifts mug, a WBA design if necessary, in which case formal statements from SAFC (and Sixer Towers) may be imminent.

30 thoughts on “SAFC vs WBA Guess the Score: 50 Shades of unbearable hope”

Next Post
Sixer’s Bradford broadside: it was an awful performance