After Saturday’s dismal display against Fulham, opinion among the fans is divided, but only on the question of how dire a situation we have landed ourselves in. Pete Sixsmith is in the glum camp

As I sat in the East Stand watching the late afternoon sun sink over Southwick I thought I saw four ghostly figures hovering over the stadium.

I looked from face to face and they metamorphosed into Steve Caldwell, Kelvin Davies, Christian Bassila and Andy Gray. One of the spectres caught my eye and I am sure he mouthed the words: “You know, they’re no better than we were.”

Nodding in agreement, I watched them fade away into the ether, shaking their heads in disbelief at another error by the back four.. 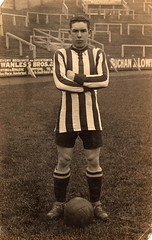 Jimmy Oakley: a look that suggests the kind of grit we need now
Picture: ylind ypind*

It was a truly awful experience on Saturday.

After two difficult away games where we had acquitted ourselves quite well (although for no points), I really expected us to beat Fulham.

Higginbotham’s ninth minute howler showed that we were in for a tough afternoon. It got worse. Our highly rated keeper was even flatter footed than Dixon of Dock Green for their goal and Halford was eventually put out of his misery by a kindly referee.

Thank goodness for Jones who worked tirelessly and was the one bright shaft of light on an increasingly doom-filled afternoon.

So, where do we go from here? Back to the Championship if this continues. What can Roy do about it? He needs to sign quality players in the January window but then so do the other teams scuffling about at the bottom.

Let’s write Derby off and look at the others.

Bolton have a track record in the top league – that and their proximity to Manchester might allow them to import some new faces. Middlesbrough also have a record but I think they are struggling to maintain it. Fulham are in London and new signings can have the run of Harrods while Wigan might sneak in a couple of Australian prop forwards to bolster their line.

Spurs should improve under Ramos. And that leaves us. We need at least three defenders who can cope with the top league. Halford, Higginbotham and Nosworthy can’t. We need pace in midfield and have to hope that a fit Edwards and Richardson can give us that. We need another forward to link with Jones. Chopra struggles, Connolly does not appear to get a chance and Stokes is an enigma. How much longer do we have to wait for him to turn on a performance at the Stadium?

I’m sorry if this sounds depressing but the combination of 40+ years as a Red and White and a return to work after a week’s holiday puts me in that kind of mood.

Manchester City next and I’m afraid I’ll be watching it on Setanta rather than travelling for three hours each way. And then the Mags…………

* Linda Wilson, who family picture of Jimmy Oakley graces this posting, explains its background at Flickr:

In clearing my parents’ home since my father’s recent death, I have come across many old family photographs. Living in an area of staunch Newcastle United Football Club supporters, as I do, it is sacrilege to admit to having anything to do with local rivals Sunderland AFC – BUT, this is a picture of my maternal grandfather’s cousin, Jimmy Oakley, who played football for Sunderland AFC, between 1922 and 1925. They were tough in those days, not pampered and spoilt. He worked a hard, full time job in the coal mines, and played for Sunderland when they sent for him. No wonder he looks so serious!! He played in many matches for them, but he doesn’t seem to have scored any goals…..