I’m busy today, with stuff to do, so I only have time for some quick thoughts. Don’t forget these are from someone who hasn’t been to a game since the season opener. And don’t forget Pete Sixsmith has already done us his usual masterly report, which you’ll find at this link. 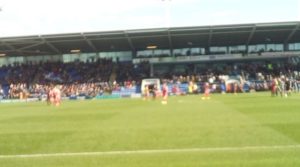 It was another unfamiliar lineup for me as there were 6 changes from the team that started the season and although I had an unencumbered view of the pitch I was low down and struggled to see what was happening on the far side. So once again I had to spend the first half working out who was who and what each role was. I’d say I failed at that task with four exceptions.

I can recognise Catts at a glance. Maybe I looked for him more than others because of that but I’d say held the middle together well, did everything expected of him simply and effectively, and was there when he was needed. Calm and commanding, he exerted an influence of the game from start to finish and he never looked like getting into trouble after his customary early booking. I’m tempted to say well done that man but perhaps he should avoid the early yellow before he fully earns any such award.

Sinclair was busy and looked sharp(ish). He moved between wings to good effect and gave their defence some trouble, but didn’t get many chances and didn’t play in a lot of others. Not for lack of trying or want of skill, it was just that kind of scrappy game, especially in the first half, and our midfield didn’t have the kind of grip required to build waves of attacks and feed strikers.

Maja looked tired and off the pace, which is not to say he wasn’t willing to go for the ball or try to do things with it. He was, but to little effect. This might account for Sinclair’s lack of success; I didn’t see a lot of partnership between the two. I wasn’t surprised to see Maja taken off.

McLaughlin has come on since that first game. He was much more confident and assured. I don’t think he was troubled throughout the game. You could argue that this was because he was playing against a poor Shrewsbury side. I’d counter that by saying he still doesn’t have a settled back line in front of him and Shrewsbury did mount some pressure in the first half. He withstood it comfortably.

I also noticed Maguire once or twice but he wasn’t setting the place alight. He wasn’t poor – no-one was poor – but neither he or anyone else produced a game-changing through ball, or a crucial clearance for that matter. When it comes to defence I have a suspicion there was some digging in and gritty play on the far side of the pitch, and Matthews covered a lot of ground on my side alone but how they fitted together took some working out.

A solid team that played for each other would be my best judgement, and solid play was enough to get us to half time despite Shrewsbury’s best efforts. 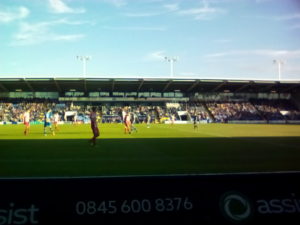 The second half was better, thanks to two early substitutions. First Gooch came on and injected the pace, energy, bite, (pick your own positive adjective) which had not been coming from Maja. Imagine that. You’re knackered but you’ve seen off the League’s top scorer and he’s being substituted. And on in his place comes someone fast, skilful, courageous and itching to prove a point. Gooch was involved from the moment he stepped onto the pitch and immediately proved to be a handful.

The team were further bolstered when Honeyman came on for McGeady a few minutes later. Clever, I thought to myself. Bolstering midfield and ensuring the point I’m ready to take. As if I know anything! Within a minute we were 0-1 up. An og, but we deserved it for the pressure we created and the confusion we caused.

After that we controlled the game. Our changes had given us impetus Shrewsbury lacked and though they did get possession and came at us they never looked like scoring.

Jack Ross brought on O’Nien with a few minutes to go. I wondered at that, given he hasn’t done a lot and we needed to stay composed and see the game out. Could he upset the precarious balance of that midfield?

Not quite. He went forward, played some nice stuff with Gooch and picked his spot to kill any last hopes the Shrews might have had. That’ll do him some good, as it did for us in the ground.

Which brings me to the fans.

There’s video of them on our facebook page. Watch it. (Rob Harding’s is better than the one I’ve put up). I had to get a seat elsewhere and couldn’t sing and roar with them. But I should be able to do that at Accrington, my likely next game. And I will. Oh yes indeedy, I will.

2 thoughts on “Shrewsbury v Sunderland: The view from the middle ground”