John McCormick writes: in this short piece Pete Sixsmith casts his eye over a couple of the more minor changes that have happened to our club in recent days. I say minor, that’s just in comparison to what else has gone on. We have lost three of the more successful, and more unassuming, people at the club.

At least, that’s Pete’s view. It’s one I happen to agree with; how about you?

I don’t think that I am a mean-spirited man. I feel sorry for anyone who loses their job, even if they are highly paid football managers. I even had a twinge of sympathy when Moyes and Allardyce, purveyors of old fashioned football, were dismissed from their posts at West Ham United and Everton respectively.

The reaction on the message boards to the news that Robbie Stockdale, Adrian Tucker and John O’Shea were leaving the club left me feeling disappointed with some of my fellow supporters. All three have worked hard at Sunderland and, in my view, do not deserve the outpourings of joy that have greeted their receipt of P45s at the Stadium of Light.

What is it that makes sports fans so unpleasant about fellow human beings? I follow the Leeds Rhinos Facebook group and some of the bile directed towards Brian McDermott, the most successful coach in the club’s long and illustrious history, is bewildering. Granted, they have not been brilliant this season, but the departure of two iconic players in Danny McGuire and Rob Burrow, plus a career ending injury to Aussie forward Keith Galloway has resulted in changes that take a time to bed in.
Judging by some of the ill-informed ranters on their forum, McDermott has…

You would have thought that Leeds had descended to the level of West Wales Raiders or Hemel Stags (both played 11, lost 11 with a ridiculous points difference). And some of the spelling leaves a bit to be desired.

For some reason, a number of our supporters seem to think that all the problems of last season that could not be laid at the feet of Messrs Short, Bain, Grayson and Coleman, could be passed on to Robbie Stockdale. Clearly, these gloating keyboard warriors were expert coaches and could see exactly what Stockdale was doing wrong and were banging on the doors of the Academy of Light to correct his errors. Coaches can only work with the players they have in front of them and when you have such a rag bag of a squad that we had assembled over the last two years, any coach up to and including Pep Guardiola would have struggled to keep us in the Premier League and/or the Championship.

Sam Allardyce spoke well of the work that Robbie Stockdale had done with the younger players and then, under his supervision, the first team. For all his travails in East and South London and in the blue part of Merseyside, Allardyce can identify and promote a good coach. He did this with Stockdale.

Some supporters need to remember that it was Stockdale who brought players through the Under 23 system. George Honeyman, Lynden Gooch and Ethan Robson have all benefited from the work that the former Middlesbrough full back put in with them. They could well prove to be the heartbeat of our team for the next few years and hopefully, this will be Stockdale’s legacy to Sunderland AFC.

And finally, there has been pleasure expressed at the fact that John O’Shea has decided to leave. It’s probably the right time for him to go. The club is on the verge of a new era and he represents the old one. But some of our supporters are seemingly delighted that he has gone, a sentiment that I find very difficult to understand. 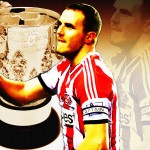 A man who spent the first 12 years of his career at Old Trafford, where the manager had been there since the mid 80s, he was thrown into the turmoil that is Sunderland.

Signed by Steve Bruce in 2011, he has played under O’Neill. Di Canio, Poyet, Advocaat, Allardyce, Moyes, Grayson and Coleman plus caretakers in Kevin Ball and Stockdale – all after working for the most successful manager in modern British football history.

He was never the quickest of players and could be caught out, but in a team that fielded such impressive central defenders as Santiago Vergini, Sebastian Coates, Sotirios Kyrgiakos, Papy Djilobodji, Valentin Roberge, Carlos Cuellar and Marc Wilson, he offered a degree of stability which got us through some very hairy seasons.

He stood up to the ridiculous bullying of Di Canio and was clearly a respected figure in the dressing room. His passing on of the captain’s armband to Bali Mumba showed the dignity and quality of the man.

See also: how Ken Gambles saw the PDC row back in 2014

Some see him as part of the so-called “rotten core” that has existed at the club since goodness knows when. I see him as a good player who never failed to give of his best, even though that may not have been quite good enough. He has managerial ambitions and he now knows from his time at Sunderland that choosing the right club is imperative.

I wish all three departees every success in the future……