Malcolm Dawson writes……..I knew there was an FM radio app on this newish smartphone I’ve got but it was hidden away so I was thwarted in my attempt to listen to Barnes and Benno as I took my brother’s dog for a run around the fields and woods of Houghton le Spring. I thought I’d got it, but it turned out I was listening to an internet broadcast which cuts out just before kick off, so as the ever energetic Chester was racing round having a whale of a time chasing labradoodles and being chased by cockerpoos, or sniffing round molehills, I was keeping up to date with events in the West Country courtesy of the text updates provided by the BBC, until I got back in the house where I was able to hear the second half commentary as I found my way around my phone. Life was so much easier when you carried a transistor radio, a camera, a carrier pigeon and a supply of sixpences in case you needed to use a phonebox.

I have my ticket for the Checkatrade semi final and will combine that game with a few days in Weston Super Mare. Before kick off, I will probably link up with Pete Sixsmith who was there yesterday to suss out a decent ale house and see us pick up a valuable three points. How was his day? Let’s find out. 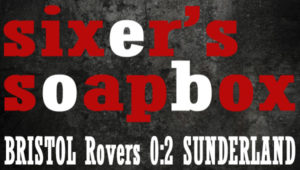 That was a very long day. I left Sixsmith Towers at 6.10am and returned to the family pile at 11pm, a tired but happy beaver after a competent and thoroughly professional away win. Want to hear more? Let’s go…….

Things got off to a good start when the morning papers arrived in Shildon just as I was leaving. They were picked up as were my two travelling companions and we arrived in Spennymoor for the coach a couple of minutes before it pulled up. There was ample room to spread out as we sped through various counties and past various towns. Coffee was taken at Woodall Services (part of the Welcome Break family) at about 9am and we continued on our delay free journey through the East and West Midlands and then into the West Country on a strangely quiet M5.

There were no more stops. The Guardian and Northern Echo were read and I whiled away the trip by listening to a programme on BBC 4 Extra celebrating the return of Alan Partridge to the BBC. There was time for conversations about the state of the Northern League, whether Dunne or Baldwin should play and what the chances were of finding a decent pub on Gloucester Road, BS7.

We drove past the site of the old Rovers ground and up towards the Memorial Stadium, glimpsing their low floodlights and the much higher ones of the Gloucestershire County Cricket Club ground in nearby Nevil Road. That became my Mission for the Morning, to go and look at it and take a couple of pics for my loyal and anorakish readers.

The coach was welcomed into the car park at noon and we disembarked. The stadium, with its Springfield Park type stand on one side, basked in glorious sunshine as the staff arrived for what was probably Rovers biggest game of the season so far – both teams entered this game on the back of a good result in midweek and both sides needed a win to strengthen hopes of automatic promotion or avoiding relegation to the bottom tier.

Your correspondent wandered off down Gloucester Road in search of sustenance and a new cricket ground.

He liked this stretch of the A38. Coming from an area where cosmopolitan means that the local restaurateurs are from Sunderland, it is always an experience to gaze on food outlets from Turkey, Iran, Poland, Hungary, the Mediterranean and even, if you look carefully, Jolly Old England. I chose a café attached to a charity shop for St Peter’s Hospice and dined on a baked potato with tuna mayonnaise and a rather limp salad. Were I a budding Jay Rayner, I would describe it to the nth degree but as a humble football man, I shall merely say that it hit the spot as I continue to attempt to lose the weight I have put on since December.

With lunch firmly inside me, it was a short stroll to Nevil Road and my joy was unconfined when I saw that the gates to “The Brightside Insurance County Cricket Ground” were open. I passed through them and the weather was so warm that I almost expected to hear the thwack of leather upon willow as Zaheer Abbas guided the ball to all parts of the ground and observe Jack Russell, replete in plant pot hat, painting the scene. I stepped on to the outfield to take a photo of the rather unattractive pavilion when I was hailed by a stentorian West Country voice, which asked me to step behind the barriers, please. I replied that of course I would (I’m a firm believer in H and S) but I would like to take a quick picture of the pavilion, whereupon I was told that it was against rules and regulations to take a picture of an empty pavilion on an empty cricket ground on a glorious day in February.

I expressed incredulity at this and was quoted rules and regulations again, whereupon I withdrew, minus photo and left with the enormously witty parting shot of “I hope you go bankrupt”. WG Grace, were he still alive, would have invited me in for a chat and Dear Old Bomber Wells (c Frank Keating) would have been all rheumy eyed at the way I was treated but, that’s modern cricket for you. I shan’t be visiting The Whatever it’s called County Ground again.

Back along the Gloucester Road I popped into The Drapers Arms, a splendid example of a micro pub, complete with jolly landlord, grown up clientele and a man with something on his head that might have been a weave, a wig or next door’s cat out for the day. Extraordinary.

And from there ‘twas but a short stroll back to the Memorial Stadium, which was filling up nicely by 2.15. I took my place on the open terrace next to the Wigan type main stand and located myself so I could see along the goal line and could then act as a one-person VAR and inform the referee of whether it was a goal or not.  I watched the players warm up, worked out that Watmore for Maguire was the only change from Tuesday and that Matthews was back in the squad albeit on the bench, and soaked up some welcome rays while chatting to Kevin Spencer, erstwhile Ferryhill lad, now contemplating retirement from the (private) school at which he teaches. He has a great story about Kevin Whatley that bears repeating one day.

As always, the opposition were big, much bigger than we are and they adopted a fairly rustic approach to the game of football. However, Dunne and Flanagan proved more than equal to it and they never once threatened McLaughlin’s goal as our Player of the Season had one of his quietest afternoons for a long time. Dunne looked a lot less edgy and a lot more comfortable in this game and won most of the headers he competed for. Rovers had no nippy forwards to embarrass him a la Paul Smyth last Friday, and, on this performance, he looked an asset rather than a liability. Flanagan just looked composed.

The opening goal came from an Aiden McGeady cross to the far post, where Will Grigg (still not on fire) knocked it back across the goal for Luke O’Nien to slide it over the line. A simple, well taken goal which showed up Rovers considerable defensive deficiencies and which gave us something to build on.

We cemented the win 10 minutes into the second half when Grant Leadbitter was involved in a tussle for the ball with Liam Sercombe and the Rovers man handled it. Up stepped McGeady, 20 yards out and within seconds the ball was nestling in the back of the net. The man from Paisley was mobbed by his team mates and serenaded by his supporters.

McGeady has been our stand-out outfield player this season. He is probably the best individual player in this league and has scored 11 times in the last 20 games. In the continued failure of either of our centre forwards to hit the net, he will have a huge say in whether we go up automatically or whether we have to suffer the play offs. Let’s hope he can remain injury free.

Grant Leadbitter also had an excellent game, bringing the ball out well and tackling when needed. His partnership with Lee Cattermole was ideal on a day like this, where battling qualities were probably more important than silky smooth skills. He has been a shrewd signing.

Alas, Charlie Wyke spurned three good opportunities to double his scoring tally, the third one being set up on a plate for him by Lewis Morgan. The Scots winger took advantage of a tiring Rovers defence and produced a simple tap in for Charlie, who looked a proper one when he turned it past the post from three yards. He does not look a confident player at the moment.

Grigg set up O’Nien’s goal when he escaped the ponderous Rovers defence at the far post and his general movement was good. Like Wyke, he needs a goal or two from open play to build his confidence and show the support that he is well worth the large fee we splashed out on him.

We were back on the coach by 5.00 and crawling through the streets of Hengrove by 5.10. The long journey back was enlivened by the news that the Posh Boys were beaten in Cardiff and by some excellent radio. As always, the last lap through West and North Yorkshire was a drag, not helped by the fact that WH Smith at Woodall does not have an ice cream fridge.

This situation should be remedied forthwith. It spoiled a decent day out.

And we have it all to do again a week on Tuesday…….