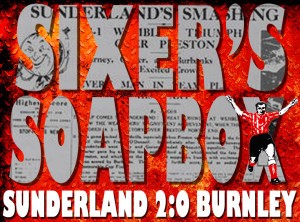 Malcolm Dawson writes….Pete Sixsmith has had a busy time since Lee Mason blew the full time whistle yesterday. First thing this morning he stepped in for M Salut and did a blog for ESPN. Read it here. Then he caught Carver, the below stairs boot boy, temporarily standing in for recently departed faithful manservant Pardew, staring wistfully at the family silver as he applied the Brasso. Peter gently reminded him that although it had been at Sixsmith Towers for 42 years there is still a chance it could be replaced this May if things go well on Tuesday but there was no way that Carver himself would get his hands on any. Following that it was time to get the old soapbox out and reflect on a job done to a not so hot Burnley side. Versatile Sheffield singer/songwriter John Shuttleworth, not quite knowing what day it was, was on stage at the Gala theatre in Durham last night. One of his numbers reflects on the realisation of a man half way through his treacle sponge, that there is in fact some unconsumed Shepherd’s Pie still to be had. Hear it here after you have read Pete’s bit. A more positive, forward thinking style of play paid dividends yesterday so surely Gus will see that the ultra cautious approach should not be the blueprint for the rest of the season. As John Shuttleworth nearly said “we can’t go back to safety now”.

To paraphrase the poet Burns in the week of the anniversary of his birth, “A win’s a win for all that.” It wasn’t overwhelming, it doesn’t make us safe and it wasn’t a mind blowing performance. But it was a win and on a weekend where every side around us lost bar Everton (and they will not be down amongst the dead men for long) there may be a glimmer of light at the end of the tunnel.

The two goals from Wickham and Defoe were well taken. The crosses put in by the full backs for them were excellent. The defence looked sound and solid. But the opposition was weak and, on this performance, they looked relegation fodder – unfortunately. A day at Turf Moor is infinitely preferable to a day at Selhurst Park or Loftus Road.

The latest formation adopted by Gus looked a lot better than the shambles we witnessed last week. Vergini and O’Shea combined well in the middle and the presence of the excellent Reveillere gave us some stability at the back. The former French international is a fine player and goes down in the pantheon of good French players at Sunderland alongside Eric Roy and er… that’s it! He is certainly better than Christian Basilla and Lilian Laslandes but that’s not saying much, is it? The cross that he put on to Connor Wickham’s head for the opening goal was brilliant – perfectly delivered with perfect pace and it produced a perfect header from a rejuvenated Wickham to give us the lead – a lead which we never once looked like losing. When our other full back, Patrick Van Aanholt, took delivery of a killer pass from Jordi Gomez and sent in a low cross into the six yard box, there was our new striker Jermaine Defoe, a player who has scored almost as many goals as his predecessor Jozy Altidore has missed, to guide it over the line to make it 2-0. Game over.


From then on, we were in a kind of comfort zone, probably for the first time this season. The back four was solid and easily negated any real threat from Barnes and the disappointing Ings.

John O’Shea is a very solid player who has done well for us and in games like this he cruises through it. Santiago Vergini also looks far more solid in the middle rather than being stuck out on the flank – he reads a game well and looks to move the ball forward. Could it be that he stays in that position for the rest of the season? He certainly looks more assured than Coates and as the venerable Wes Brown is unlikely to be offered a new contract for next year, the Argentinian can create a genuine niche for himself.

The midfield three did exactly what they were supposed to do. Larsson maintained his phenomenal work rate and used the ball effectively. Bridcutt seemed far more at ease in midfield rather than sitting in front of a back three and Gomez deserved his place purely for the wonderful ball that he played through to Van Aanholt for the second goal. He is a frustrating player. He moves at one pace and is probably caught in possession too easily, but he has the Eric Roy (two mentions in one piece for the man from Nice) knack of being in the right place at the right time. When he plays a ball, it often opens up a defence, particularly when the opposition is about the same standard as we are.


With Defoe being used as a spearhead, it allowed Johnson and Wickham to play wide. The former City and ‘Boro player had an excellent game, pulling the Burnley defence and midfield around almost at will. He played a major part in the second goal and the ball he played to Van Aanholt early in the second half to allow the Dutchman to set up Defoe, was an absolute gem. Had we scored a third goal at that stage, I suspect that Burnley might well have folded.

The second half was a tad anti-climactic as the Clarets struggled to get into the game. Neither Ings nor Barnes worried Vergini or O’Shea and although Marney and Jones worked hard, they achieved very little. The game petered out and the crowd began to leave early, knowing that it was highly unlikely that Burnley would take a point from us.

So is this the beginning of a renaissance, similar to that we went through twelve months ago? We can but hope. That there is much to do is not up for debate. There is still a lack of quality in the team – Borini and Ki have not been replaced and there is a more prosaic feel to the side. The introduction of Defoe and the quality of Johnson and (hopefully) Fletcher and Wickham gives us something to cling on to.

There is a long road ahead of us but this is an important first step and needs to be maintained at the old fashioned delights of Craven Cottage on Tuesday and the more up to date concrete of the Liberty Stadium on Saturday.

Duncan Sutcliffe, who contributed that excellent WAY on Burnley, joined me for a pint in The Isis pre game. He was optimistic at 2.00 p.m. but that optimism had dissipated by 5.00 p.m. and he was genuinely worried about Burnley’s remaining games. I thought they looked well organised but there was no real creative spark and I fear for them.

The other results were too good to be true and Villa’s thrashing at Ashburton Grove adds to the glow of satisfaction. Hopefully Poyet has a team that may excite him and the 40,000 others who turn up week in and week out to give this perennially unsuccessful club, the sixth highest average crowd in the Premier League. Like many others, I wonder what would happen if we could actually go through a season playing attractive, attacking football, finish in the top half and genuinely excite the fans with a solid midfield and a genuine goalscorer, similar to what we did when we hoofed it up to Quinn and Phillips.

Over to you, Gus.