Monsieur Salut writes: normally, our deputy editor Malcolm Dawson introduces Pete Sixsmith‘s unfailingly compelling reflections on Sunderland matches. I have become quite proficient at following each match by internet streams and Barnes and Benno but Malcolm and Sixer both attend most home games and the lame 0-0 draw to Burnley was no exception (the interviewee for our first-class Burnley ‘Who are You?’ Duncan Sutcliffe joined them in County Durham yesterday to complete his journey from Lancashire to the Stadium of Light).

Sixer suggested that for once I should post his piece because, talking over the disappointment of the game by phone this morning, we both found bleak humour in my oversight, when sending my usual report to  ESPN, in inadvertently omitting Jack Rodwell entirely from my ratings. It was therefore, until quickly rectified, as if we had started with 10 men. Mmmm. Over to Sixer to ponder this Freudian slip and other striking features of a match that may prove decisive in our latest bid to survive in the top flight, and see if you can improve on his closing reference to the newly departed and truly great Chuck Berry …

The weekend of my arrival on this earth, 66 years on, allowed me to watch two of the three sports teams that I follow with varying degrees of emotion.

On Friday I headed to Headingley where I used to go with my dad and grandad in the 1950s to watch Lewis Jones and Jeff Stevenson weave their magic against the likes of Billy Boston and Johnny Whiteley. The (relatively) newly branded Rhino’s completed a comfortable 38-14 win over Wakefield Trinity, much to the chagrin of one of our party who is a dyed in the wool Trinity man and was at the “water splash” final in 1968 when Don Fox missed that last minute conversion.

It allowed me to hope that there would a double up on Saturday and that I would have a happy birthday, wreathed in smiles and beginning to build up that familiar feeling of hope that swells in the breast every March. 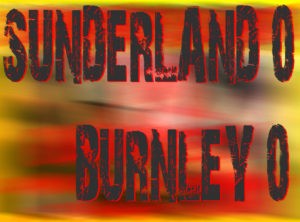 Fat chance. What I got was a dismal game that reinforced my view that the Premier League is the most overrated in Europe and that we are as likely to avoid the drop as George Osborne is to telephone M Salut for tips on how to be a newspaper editor.

This was the best chance we had to revive the season against a side who play in the same way every game and who have no single player who can change a game. There is no Defoe who can take a goal from nothing or a Januzaj who can (so I am told) ghost past defenders and create and finish chances.

What Burnley do have is a plan and they stick to it. Sean Dyche has an organised, well drilled and clearly instructed team who look comfortable in the Premier League and should continue to flourish.

What we had on Saturday was the equivalent of a Sunday morning team who are told by their manager to “just go out there and play and see what happens”. The pub manager is not paid; David Moyes is and a considerable amount as well.

This was the performance that convinced me that Moyes is not the man for this job. He has been at Sunderland for seven months now and has done very little to persuade me that he has any real ideas as to where he and the team are going. There is no discernible plan, players seem bemused on a regular basis and he looks as if he knows he should not have taken this job.

Nobody personifies this lack of direction more than Jack Rodwell. Five years ago, he had the world at his feet. He had done well at Everton, had played for England and departed to Manchester City with pundits hailing him as the new heart of the Mancini revolution.

On Saturday, after yet another injury-ravaged season, he looked lost. Here he was up against Joey Barton and Jeff Hendrick, players he should have been able to dominate but who had a clear role to play in their team. I looked at Rodwell and wondered whether he knew what was he supposed to be doing? I suspect he didn’t.

He more than anybody typifies the mess the club is in at the moment. He cost a lot of money and came with high hopes of resurrecting his career. He has been yet another expensive disappointment as have most of the signings we have made over the last three years. You would be hard pushed to name anyone other than Jermain Defoe who has added anything to the team over that period. The last decent players were signed by Steve Bruce.

And so we sit at the bottom of the league falling further and further behind. Palace and Leicester have put runs together and look safe. Bournemouth are looking up. It leaves three from four with Swansea looking the more likely to avoid the hangman’s trapdoor. We look certain to drop through it.

Moyes came with a lot of good will. He had done an excellent job at Everton, had found Manchester United difficult as did Van Gaal and as does Mourinho – but he makes better excuses.
Real Sociedad was a brave attempt to manage abroad and to pick up new ideas. We hoped that his organisational skills and these new ideas would keep us stable and give him time to look at the club in the long term and do a Tony Pulis or a Mark Hughes and give us mid-table respectability.

That good will has almost gone. The Sunderland crowd are remarkably patient verging on stoical. We have been through all this before, but at least with Advocaat and Allardyce we had coaches who could organise and with Poyet we had someone who took a gamble as when he threw in Connor Wickham.

Moyes has none of this. He is not a gambler. He uses the same players week after week despite it being fairly (bleeding) obvious that Borini, Larsson and Rodwell are not going to produce anything. He refuses to allow Khazri more than 15 minutes when we are chasing the game – here is a player who, for all his failings, can produce the unexpected but is never given a chance. Another signing, another write-off at the end of the season. A return to Bordeaux must seem far more attractive than visits to Brentford, Birmingham and Blackburn.

His team organisation is just plain poor and I felt that he knew the game was up on Saturday and that he is now waiting for the owner to pay him off so he can go somewhere else and start again. He inspires little confidence in me as the man who might just prompt a Keane-like revival in the Championship next season.

And so we go on. The clock is counting down. We need the footballing equivalent of Brian Blessed and his bird men plus Flash Gordon to save our universe from the clutches of Ming the Merciless aka the EFL Championship. I fear for the future of the club and the support. Unlike the late, great Chuck Berry, we do have a particular place to go.

10 thoughts on “Sixer’s Burnley Soapbox: no plan, no guile but at least a Chuck Berry payoff”

Next Post
Moyes on the boys v Burnley: ‘unfortunately the point we’ve got today isn’t enough’