Malcolm Dawson writes…..with a little more luck we could have had all three points but in truth we were fortunate to come away with a draw. If that sounds more than a little contradictory there’s more to come.

We hit the woodwork twice, had a goal disallowed (correctly in my view), theirs came about after an attempted pass inside took a wicked deflection off Flanagan’s outstretched leg and I thought we had the better side. But we surrendered possession far too easily, left big open spaces in midfield and at the back (which the Brewers exploited) rarely won a second ball and more than once needed Jon McLaughlin to be on top form to keep us in the game.  All that and a ref who once again failed to impress.

We might have had the better side but in my eyes Jack Ross’s boys only performed at about 40 per cent of their ability whilst the visitors were closer to 90. I left the ground knowing that an automatic promotion spot will be ours if we can match Barnsley’s and Portsmouth’s results over the remaining games but also a little concerned that three of our remaining six games are at home, where we might be undefeated in the league, but where we have also dropped a lot of points in games we might have expected to win.

I’m writing this intro before receiving Pete Sixsmith‘s match report and wonder whether his view of the game and his assessment of our current position matches my own.

Well it’s here now and you, no doubt like me, will be eager to read his thoughts. 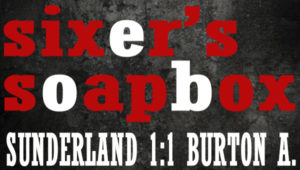 I came home last night in a bit of a quandary (it’s a smaller version of the Mazda 3) about whether this was a point gained or two points lost.

It’s possible to argue for both.

On the one hand, here was yet another home display which was mildly disappointing after two good away ones. We lived dangerously and almost gave away at least one more goal while contriving to miss good chances at the other end. As Young Nigel said “My dad would have scored four last night” and as his dad would have said, “Barbara (Mrs Clough) would have put a couple in. Charlie, she’s talking about you…..”

On the other, we came back strongly, equalised reasonably quickly and carved out chances that were either missed, hit the post or just went over the bar. We were playing a team who had beaten Barnsley on Saturday and whose last two home games are against Portsmouth and Luton Town. Kings of the division they are not, king makers they may well be.

I thought they were a side that echoed Clough Senior’s rule for a good team – a strong spine.

Jake Buxton was his Larry Lloyd – a big, strong central defender who has been around the leagues and who is now in his second spell as a Brewer. He followed Clough Junior from Burton to Derby where he played 139 times and then moved on to Wigan and back to Burton. He was physical, combative and he got the better of Charlie Wyke, although Charlie never stopped trying.

In midfield, he had a John McGovern type in Jamie Allen, a former Rochdale player. Like McGovern and Paul Scholes, he was involved in everything and he was the outstanding midfield player on a pitch that at times was congested and at other times was surprisingly wide open.

Finally, a big, mobile centre forward. Brian had Gary Birtles and Peter Wythe. Nigel has Liam Boyce – a player who will be known to Jack Ross after his excellent spell with Ross County in the SPL. The Northern Ireland international has a great work ethic and a degree of physicality that fits this division. Albion will do well to keep him next season and he looked a better bet than a rather limp Will Grigg last night.

Albion were good opponents and we couldn’t expect them to lie down for us so that we can take our rightful place at the top of the table – although some of those sitting behind me seem to think that our opponents, whoever they may be, are not fit for the Brandon and Byshottles Sunday League Division Four. We need to be more careful and a wee bit more proactive when playing teams like Burton (and Coventry City and Fleetwood) who have little to play for but want to be an absolute bloody nuisance for those who have.

The importance of Aiden McGeady was highlighted in this game due to the fact that he wasn’t there. He is the one really class act that we have at the moment and is a match winner. His absence does not make our hearts grow any fonder and the quicker he is back the better. Chris Maguire, as talented as McGeady but more erratic, would also give us that bit of genuine quality that makes us better than Barnsley or Portsmouth or a rapidly improving Charlton Athletic.

Some of the players looked drained in this game.

Lewis Morgan, who has hardly played this season, was running on empty long before he was replaced by Benjy Kimpioka and Grigg never got into the game.

Our main attacking thrusts came down the flanks but they had O’Nien shackled in the first half and Oviedo, who I thought was excellent whenever he got the ball, was starved of it in the last half hour.

We now sit in second place and still hold a game advantage over the Hatters and the Tykes with Pompey three behind on level games and the Addicks four behind and a game more played. The ball is in our hands now. Like all good rugby league players, we need to move it on quickly and get over that line with a wee bit of style.

Failing that, I’d be happy to grind it out.

5 thoughts on “Sixer’s Burton Albion Soapbox: back in the box seat despite the disappointing result”