Pete Sixsmith is en route to Craven Cottage but will do anything to avoid FA Cup Final day. At least this example of his Maytime rambles had its own special rationale …

What constitutes a good day out?

A pleasant travel experience, perhaps? Maybe a world class destination? What about the option of some specialist retail therapy? A chance to meet with a good friend usually goes down well. A football match would not go amiss and, if it is coupled with a meeting with a hero from the past, so much the better. Finish it off with a splendid pint and that just about cooks it for me.

Sounds ok? Good, because all of those things happened to me on Saturday. A first class ticket to Edinburgh – £6 less than Standard Class (try to explain our rail fare structure to a European; they can’t believe it) – covered the first two hours or so and a hole in the Barclaycard, inside Coda Music on Bank Street, covered the third one.

Then, a train to Rosyth to be met by Ayr United’s answer to Paul Lawrie, John Penman, who had kindly volunteered to drive me to Methil, the home of East Fife and the one Scottish League ground that has not been graced by my presence.

John had arranged some tickets and a bar pass from a golfing pal of his, Gary McAlpine, who worked with the young players at Bayview Park. Gary met us in the bar and pressed a signed pennant into my clammy fist and an autographed East Fife away shirt, size XXXL. It’s green and white stripes, the same as Real Betis, although it has to be said that Seville is a slightly more attractive town than those that make up the old Fife coalfield.

Gordon Chisholm is the assistant manager of the Fifers and I asked Gary if he had signed it. Yes he had and off he went, reappearing ten minutes later to take John and me to the manager’s office to meet Chis.

His boss is Gordon Durie (East Fife, Hibs, Spurs and Chelsea), a player with 40+ caps for Scotland and a wonderful nickname – “Juke Box”. We squeezed into the tiny manager’s office, shook hands and had a great ten minutes chat.

Then, I was allowed to join him on the hallowed turf of Bayview where John took the photo and off he went to prepare his charges for what was essentially, a dead game against The Red Lichties of Arbroath. 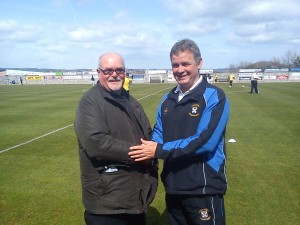 He is a thoroughly good bloke who was involved because he enjoyed it – as was his boss. He spoke fondly of his time at Roker Park and disparaged McMenemy with a curt “I signed for Hibs”.

His team were well beaten by a very impressive Arbroath side, led by a former team mate of Carlos Edwards, Kenwyne Jones etc in Colin Samuel. Playing in a short sleeved shirt and gloves (why?), he scored one goal and set up the other two in his side’s 3-1 win.

I was introduced to the crowd at half time by Scotland’s only female stadium announcer, the glamorous Caroline Maxwell, who did the honours dressed up as a fairy on the club’s annual fancy dress day. A very comely and attractive fairy as well.

They had no need to do any of this, but they showed the camaraderie that exists in the game and becomes stronger the further you go down the Leagues.

All were genuine people at a genuine club. I shall be watching their progress next season; they are seeking to clamber into Division One, where the other three Fife clubs are likely to be next year.

In the meantime we have to put up with Diddy David Hamilton in a city that has just re-elected Boris Johnson as mayor. May a plague of boils descend on all those who supported him – particularly if they play for Fulham.

4 thoughts on “Sixer conquers Scotland with starring role at East Fife, club with a heart”

Next Post
Salut! Sunderland’s Week: the best of enemies – Newcastle and their sharper Cissé