John McCormick writes: once, in the days of Ted Heath and strife, I went to see us play Leyton Orient in an afternoon kickoff and then legged it to White Hart Lane and Spurs v somebody or other. If I remember correctly I saw the last half hour, or maybe a bit more. I’ve never told anybody before, especially Pete Sixsmith, for the man would quite rightly have looked down his nose and sniffed at me for thinking I’d done something special.

Speaking of which, here’s his report from Pride Park and a very good Good Friday fixture:

Apologies, dear reader, for the lateness of this; I did not return to Sixsmith Towers until late on Saturday night after a day away from the rigours of the paper round and a bit of Easter football. I am sure that you understand….. 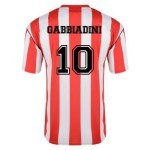 In the Good Old Days, Easter was a footballing cornucopia. Everybody played three times and, with a bit of luck, you could find up to three games in a day, long before the Groundhops started in the early 1990’s. I once did Halifax Town (v Darlington), Barnsley (v us) and Doncaster Rovers (v Cambridge United) on Easter Monday 1989. We lost 3-0 at Oakwell, 48 hours after a crushing 4-0 win over Ipswich, which featured a Marco hat trick – and a Marco red card for pushing an Ipswich defender over immediately after he had scored his third from the spot.

So, looking for some bread to put around the sandwich filling at Pride Park, I consulted the websites and came up with games at Alfreton Town on the Friday afternoon and Rushall Olympic on the Saturday. I had been to the former years ago while the latter was a new ground and it enabled me to complete the Northern Premier League Premier Division. I will treat myself to a new anorak.

As far as the bread for the sandwich is concerned, the first game was the equivalent of a flaccid slice of Mother’s Pride as Alfreton and Nuneaton bored the very cold and occasionally wet crowd with an aimless 1-1- draw. The other slice, at Rushall (a small, former mining village near Walsall) was much better, more of a craft bakery sourdough, with plenty to get your teeth into.

Olympic had a Sunderland connection in that Liam Lawrence had played a few games for them at the start of the season. He was friendly with the then manager although he left when aforementioned manager got the sack. They punch above their weight, do Rushall, and confirmed that by producing a very gritty and determined performance to beat league leaders Altrincham (Duncan Watmore’s old club) 2-0.

I had gone expecting the sandwich filling to be some soggy lettuce, a manky tomato and a greying slice of some indeterminate meat cut from the hindquarters of an animal that had lived its life in abject misery. Instead, what I got was worthy of the kind of sarnie that is dished up at the poshest of posh dos, a lobster or Parma Ham or caviar concoction which left one’s taste buds tingling and demanding more on Monday afternoon.

That Derby looked a side who have had their confidence removed without anaesthetic is not debatable, it’s a fact. They were wretched and the ghost of “Old Big ‘Ead must have looked down in amazement as they looked like blowing a second automatic promotion in three years.

Nor would he have been impressed by the ear splitting PA system and the brain splitting PA announcer who tried to whip up an atmosphere amongst supporters who look as if they are losing their faith. Putting flags out for adults who should know better and encouraging a “cheering” competition between the four stands (we won that one as well) reminded me of the false atmospheres created at places that have no football history – Middlesbrough, Reading, Watford. The day we do anything like that on a regular basis at Sunderland is the day that I stop going.

By the time I reached my hotel in Derby, the rain had started. By the time I left the hotel to walk to the ground, the rain had been replaced by a deluge and it never let up. There was water standing on the grass verges of the industrial and leisure complex that houses the stadium and had this one been at The Baseball Ground, we would have all gone home by 7.00 it was that bad.

There was the usual excellent turn out of just fewer than 2,000, with familiar faces and actions well represented. Those who find it impossible to watch a game without taking on board large quantities of alcohol and other substances, enjoyed themselves downstairs by flinging “beer” around in their own time-honoured tradition; those older, wiser and more interested in the football than in being seen as “one of the lads” made their way to their seats in the corner and contemplated the team selection.

The reverting to a back four was generally looked upon favourably, although Donald Love’s inclusion was questioned. The return of Aidan McGeady and Paddy McNair met with general approval but the same could not be said about Ashley Fletcher’s place as the fulcrum of the attack. All four were to play a very important part in the win, so what do we know?

As performances go, it was probably the best since Chris Coleman took over. The result was a stunner and although we never looked in supreme control, the commitment and work ethic of the players was unquestionable. Defenders defended, midfield players harassed and forwards scored. It was that simple. Football can be a deceptively easy game at times and perhaps we have wasted too much time trying to fit players to a system rather than fitting a system to the players.

They seemed more comfortable in their roles as we played a 4-2-3-1 formation with Cattermole and McNair anchoring the midfield. McNair is a good player and, should we keep him if we do go down (Ipswich were no help to us on Saturday), he should run riot in Division One. His shot led to the corner from which we went ahead, Honeyman’s excellent shot being beautifully headed in by Cameron Forsythe (Bruce would have had a better game than he did) and throughout the game, the Ulsterman’s big powerful frame was seen all over the pitch. He tired towards the end but it was an excellent showing from a young man who must be wondering where his career is going.

Ashley Fletcher would have grown up with him at Manchester United. Two big money moves have not worked out and this loan move looked an act of desperation on behalf of club and player. Up against experienced defenders in Richard Keogh and Curtis Davies, he knew that his manager had taken a gamble on him. Fail here and he probably would spend the rest of the season being jeered as he came on from the bench and we slipped silently beneath the waves.

He should send a huge Easter egg to Keogh who helped him open his account by giving him the ball and a clear run on goal. In previous similar situations he has miskicked, fallen over and generally performed in a way more reminiscent of Norman Stanley Fletcher. This time, he took the ball on and rammed it in the net. Cue an outbreak of madness in the Sunderland corner as we celebrated with him. He looked a relieved man.

It could have been four by half time as Lynden Gooch was inches away from a Fletcher cross and the man himself reverted to type when he fluffed a great chance just before half time after a defence splitting through ball by the excellent Aiden McGeady.

Derby had pulled one back just before half time through Vydra, courtesy of our seemingly permanent inability to clear the ball properly but the mercurial Scots/Irishman restored the two goal margin from the spot after the hapless Forsythe needlessly pushed the excellent Gooch in the back as he attempted to get past him.

Fletcher hit the post with a thunderous shot, a McNair header rattled the bar before the Old Warhorse himself, John O’Shea, poked home the fourth to prompt a Stadium of Light style walk out by the disgruntled Rams support. Flags were dumped and jeers rang around a Pride Park which was virtually empty for the last few minutes – apart from the away corner where people were praising the Lord on his special day.

Now we have to do it again. We played well but Derby were shocking, far worse than any performance we have turned in at The Stadium. Sheffield Wednesday will prove a far sterner test and we still have problems at the back, in midfield and up front. But confidence is a marvellous thing and those players will be thinking –

– A win will give us a firmer hand on the metaphorical lifeline that we need to pull ourselves up. Concentration, hard work and a crowd who are prepared to show patience will all help on Monday. Then we can dine on Lobster Thermidor rather than lobster sandwiches.

1 thought on “Sixer’s Derby Soapbox: Pride Park and Something Special”

Next Post
The First Time Ever I Saw Your Team: Sheffield Wednesday