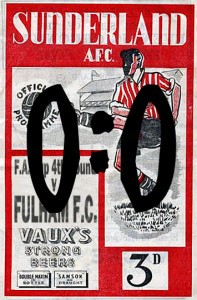 Malcolm Dawson writes……I couldn’t get to this game being otherwise occupied on the Fylde coast. Phew – got away with that one. Of course Pete Sixsmith gets to every home game and most away matches too but even his patience is being tested. The euphoria felt at Old Trafford and Sid James’ Park isn’t making up for the amount of dross and drivel he is being served up on a far too regular basis. Already he has taken the decision to cut down on the number of times he follows the Lads to away grounds and it sounds like he is not far from choosing to leave his seat at the Stadium of Light unoccupied. He’ll be back next week, as will I, but his commitment is being pushed to the limit. With many of the fancied teams now out of the competition the F.A. Cup offers us a realistic chance of silverware. Not, according to Pete, on yesterday’s performance. Here’s his somewhat downbeat assessment of the goings on on the banks of the River Wear yesterday.

I could, and perhaps should, have driven off at 2.05 and headed for North Shields in order to watch Shildon put their Northern League challenge well and truly back on track with a 1-0 win against the then league leaders. Why 2.05? That was when Nick Barnes and Gary Bennett read the team out for this FA Cup Fourth Round game. First of all they said that McCormack and Rodellega were on the bench for Fulham, suggesting that the Cottagers were not over fussed about this game.


Bennett suggested to Barnes that Giaccherini was almost certain to be part of a midfield three with Larsson and Rodwell and that hopefully the one time Italian international would be able to spark some creativity and create chances for new arrival Jermaine Defoe.
Then came the team news; no Giaccherini, no Alvarez but a three of Rodwell, Bridcutt and Larsson. There was a sharp intake of breath from Bennett – and from the driver’s seat of the trusty Mazda. “Where is the creativity going to come from,” said the pundit. “Should I head for North Shields,” said the fan.

I made the wrong decision – which was several less than Gus Poyet made on a truly wretched afternoon, which did nothing to assuage the mood amongst the support that bothered to turn out -that we were sliding towards the bottom three and that the miracle of 2014 was unlikely to be repeated in 2015. The lack of tempo and pace at the start was frightening as we allowed a competent and well organised Fulham side to settle. The Dog and Duck could settle against us as we pass the ball sideways, backwards, anywhere but forwards, putting minimal pressure on whatever opponents we are facing.

To many of us it was patently clear that the ball was not going to reach Defoe or Fletcher quickly and that when it did eventually reach them, the Fulham defenders were ready and waiting. It also became apparent that a week on the training ground is not sufficient to bed the players into this new 3-5-2 formation. They argued with one other, asked what they were supposed to be doing and generally looked as if they had little idea of what was expected of them. Of course, it helps if you can actually pass the ball to one of your team mates and this basic requirement seemed to be beyond too many of them, particularly those charged with the responsibility of driving the team forward. Only Larsson of the midfield three looked comfortable in this set up, drawing on his huge reserves of energy to push Fulham back and win the ball. His two colleagues showed little inclination to match him.

Bridcutt was, to put it mildly, poor but one expects little from a player who is clearly suited to the Championship. It is Rodwell who seems to encapsulate the problems that Sunderland AFC have at the moment. Hailed as a good signing by many (including this scribe), his first six months at The Stadium of Light have been distinctly underwhelming, culminating in a performance where the team actually looked better once he had been sent off. He could have gone in the first half, because the challenge that earned him his first yellow was as close as you will see to being a red. It was made after he had lost the ball, leading to him losing his temper and going in with his foot off the ground on Staflyidis. He then committed two more fouls which drew a quiet word from referee Anthony Taylor, before he got himself a mandatory yellow for obstructing the goalkeeper. “Idiotic”, “stupid” and “does he ever actually think” are words that spring to mind.
He had every right to be frustrated as his performance had done nothing to justify the large fee that Manchester City took off us for his registration. He struggled to keep up with the pace of the game which, for a man who is supposed to be a “box to box” player, is just not good enough. He appears to be yet another player who has come to Sunderland to maintain his lifestyle and who, on what we have seen so far, will not be an asset to the club and will bail out should we be relegated at the end of the season – something which is looking likelier as the weeks pass by and we show no pace, tempo or the ability to fashion chances.


The support is rapidly becoming disillusioned with the football being played. A single home win all season in the league does not inspire. Chelsea apart, the games have been dull and uninteresting and there seems to be an inexorable slide towards relegation. There is an old adage that players are more important than systems and that good players will fit to whatever the coaching staff wants them to do – as long as they buy into it. Look at our players – fractious, unsure of themselves and seemingly not convinced by what they are being asked to do. They know that we are going into a series of home games that will define our season and will either propel us to mid table safety and obscurity or dump us in the bottom three, possibly for the rest of the season.

Some flair and imagination are required for the Burnley game on Saturday. Johnson should return and hopefully Cattermole, whose drive and energy has been sorely missed. If Defoe is to flourish, he needs players who will get the ball to him quickly and take advantage of his ability to make his own space against defenders. Whether Fletcher, who mysteriously spent much of his hour on the field in a wide position, is the man to play alongside him, remains to be seen. As does the ability of Messrs Poyet, Tarrichio and Oatway to get our season moving. Burnley could well be their make or break game.

Next Post
Pure Poyetry: Sunderland 0 Fulham 0 but it’s not my fault