Malcolm Dawson writes…..I called into the Wetherspoons in Houghton to give mine and M Salut’s regards to Hull City fans Raich and Gary, excellent contributors to the Who Are You series but there was no sign – so I nipped into my brother’s for some Cheesy Puffs and a chicken drumstick prior to this one. I can’t say I was too optimistic. Anyone who has followed Sunderland for more than a season knows that they can surprise you in the most unlikely of situations and will invariably disappoint if you go full of expectation. Like so many games before, here was a fixture we were odds on to win against a side rapidly becoming odds on for the drop. Another banana skin loomed and with Andre Marriner in charge we were unlikely to get any marginal decisions. I don’t normally moan about referees, adopting M Salut’s stance that generally they do a tricky job to the best of their ability, but this particular official has a track record when in charge of our games and yesterday just added more grist to the mill. Having said that we were crap second half. Peter Sixsmith concurs. 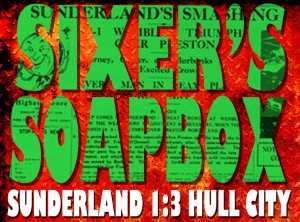 How to spoil a good Christmas:

Take a Sunderland side who seem to think that a derby day win guarantees undying affection and a continued presence in the Premier League, add a twist of a former Sunderland manager who has forgotten how to win against anybody but the red and whites and throw in a soupcon of Andre Marriner, possibly Europe’s most inadequate referee, and you have the ideal recipe for an absolute disaster, a game that made cold sprouts and a box set of Jim Davidson DVD’s seem infinitely preferable.

The day had started well. I was a guest of Pete Horan and Emma Niven (the younger of his two stunning daughters) in the Montgomery Suite. The food was excellent, the company equally so. We shared a table with a lovely family from Peterlee (there’s a good story here which, hopefully, will appear later), chatted with Chris Makin who is currently “working” with Nicky Summerbee in Qatar, commentating on Premier League games and bumped into John Hawley who, tongue in cheek, predicted a 3-1 win for City. Oh how we laughed.


The smiles grew wider as Hull contrived to defend like the Over 50’s team in the annual pub challenge and Adam Johnson rolled the ball into the net in the first minute. We sat back in the plush West Stand seats and anticipated an opportunity to reduce the goal difference deficit.
For fifteen minutes we looked good; trickery from Alvarez, excellent link play from Fletcher, some crisp passing from Gomez and Larsson. When the Swede put a good opportunity wide, there was little to worry about as surely another chance would be along in a minute or two.

What we didn’t realise in our post prandial comfort zone was that The Tigers were gradually gaining a foothold in the game. Led by the excellent Stephen Quinn and the busy Sone Aluko (a player who had passed underneath my radar), their passing was crisper than ours, their movement was more incisive and when Gaston Ramirez levelled with a goal that seemed to hit a divot and embarrassed The Giant Pantilimon, it was no more than they deserved.

We had a flurry of activity before the half time whistle went which gave Andre Marriner the opportunity to show us why he should be barred from Wearside until the 23rd Century. I thought that Alex Bruce clearly handled a cross from Adam Johnson, as did most of the Sunderland crowd and players. Bruce had his hands up and was always liable to touch it, either intentionally or not, therefore it had to be a penalty.
I was less convinced by the other claim against Quinn where I thought that the ball hit the hand but we could have gone in 2-1 up when McGregor made a good save from Vergini’s effort. It would have been undeserved but I would have taken it.


The second half was an absolute disaster as Hull proceeded to roll us over for the fourth time in a row. Chester’s firm header came about because he was completely unmarked and Jelavic finished off the twitching corpse in the last minute as we pushed up field in a desperate attempt to salvage a point – one that we did not deserve.

What is it about this club? As Pete said after the game “You could put the Real Madrid team in Sunderland shirts and they would perform as Sunderland always do.” How right he is. There we were, with the warm glow of a Derby win behind us, a game where it was accepted that we played the better football. Another 40,000+ crowd, bedecked in new Christmas jumpers, scarfs and hats, full of brandy and bonhomie and we play like this.

There were some players who were seen through in this debacle. John O’Shea has had a good season thus far, but take Wes Brown out of the team and he is not as effective. Put him alongside Coates and he is even less so. The Uruguayan, who grew into the game at Newcastle, grew out of this one pretty quickly and his passing was woeful. Vergini was little better. Cattermole played far too deep, Larsson appeared to believe all the good things written about him this season and Alvarez and Gomez are lightweight, ineffective and out of their depth. Jack Rodwell must be looking like Billy Bunter in training if he can’t get into this team.

And then we come to the substitutions. Off came the two Z men and on came Giaccherini and Altidore. The former was making his return after three months out so that may be the reason for his wretchedly disappointing performance. A couple more like this and he may well be resuming his career in Serie A. As for Altidore, well, I really cannot envisage him ever scoring for Sunderland. Danny Graham offers more and so would Mikael Mandron. The American has had ample opportunities and has shown that he has nothing to offer at this level. His movement was poor, he rarely wins headers and his presence on the field can only inspire giggles amongst the opposition defenders. His sole contribution to SAFC will be to be mentioned in the same breath as Andy Kerr, Tom Ritchie, Brett Angell and Jon Stead as complete and utter flops.

So, a real disappointment, made all the more so when the other results are looked at. A win or even a draw would have pushed us up the league and created a breathing space as we go into a four game run where points will be hard to come by.
But this is Sunderland, a club where the catering is excellent, the set-up is outstanding and the product on the field is consistently disappointing.

Will it ever change?

What do you think?