Malcolm Dawson writes……one of the things that struck me about yesterday’s game was how similar the pre and post match experience was to any other game. OK the excitement, anticipation and nerves on the way to the ground were heightened and the euphoria, relief and general feel good factor on the way back to the car greater than usual, but I experienced no hint of the bile or threats of violence that had become commonplace in recent years. I am not naive enough to think that there won’t be some followers of both clubs who would like to inflict physical damage on anyone with a different affiliation, but I do believe that more than 99% of football fans are decent people who want a civilised day out without having to worry about their own safety and those they have to look after. The sensible low(ish) profile policing was such a departure from the bubble and bus them in approach and the fans responded to that. Yes there were plenty of police about, but in normal uniform and not the riot gear which can inflame rather than calm a situation. So well done to Her Majesty’s Constabulary and to the fans of both clubs who (in the now well worn phrase) kept the passion but lost the poison. Long may it continue. And now to the game itself, which was attended by the entire editorial team of Salut! Sunderland and of course our chief contributor Peter Sixsmith. Here’s his customary, though rather more euphoric than usual, view of another pleasant Wear/Tyne Derby day.

October 25th 2015 will go down in history as the day that we ran up the SIXTH consecutive victory in North East derby games. Never before has a team won SIX consecutive games in this clash which began when the Black and Whites won the first one at Roker Park on Christmas Eve, 1898. We reciprocated by winning at the soon to be renamed Sports Direct Arena in April of the following year.

Since then, both sides have had their good runs, but neither has ever won SIX in a row – until now. These are the days when you get great pleasure out of spelling out your surname if you are called SIXsmith. I took my pleasure on Sunday night by quaffing a couple of bottles of Wadsworth’s 6X and reminding myself of what an excellent chocolate bar Cadbury’s Bar 6 was, before watching Audrey Hepburn in The Inn of the SIXTH Happiness and listening to Sounds of the SIXties on the BBC i-player.


Right, that’s the cheap gags out of the way and I suppose the reader(s) will want the cool analysis and reasoned argument for which this column is famous, throughout the length and breadth of our great kingdom and far beyond the shores of our noble island. Fat chance after we have beaten them for the sixth consecutive time. All I want to do is revel in what was a great result with elements of an encouraging performance.

The whole game hinged on the decision that Wakefield referee Robert Madley made on the stroke of half time. After having had to sit and watch Newcastle weave pretty patterns all over the pitch without ever really looking like finishing them off, we broke quickly when Wijnaldum lost the ball in our penalty area. It was cleared up field and was played on to Defoe, who then played a ball in the general direction of Steven Fletcher. Fletcher got ahead of Coloccini and may have got to the ball before a hesitant goalkeeper but he was prevented from doing so by a hefty shove in the back by the Newcastle skipper. Penalty and red card for Coloccini, goal for Adam Johnson with celebrations aimed at Newcastle fans who had abused him roundly all first half.

Was it a penalty? Yes. I watched it last night and Coloccini shoved him. It wasn’t a shoulder charge; it was a shove in the back and was done to prevent Fletcher from (perhaps) getting the ball before Elliott. Was it a red card? Not as clear cut, but if the referee thought that Coloccini was denying Fletcher a goal scoring opportunity, it was. Some would say we got lucky here and that if it was the other way round, we would have been spitting feathers, but the decision was made and that was it.

The kick was taken perfectly by a player who has often flattered to deceive in the four years he has spent with us (5 managers have rated him in that time, so what do I know) and his celebration was aimed at those opposition fans who clearly have no knowledge of the law in that someone is innocent until proven guilty. I wish that he had gone to the corner where the Sunderland fans were rather than run the length of the pitch but I am not Adam Johnson and am highly unlikely to ever take a crucial penalty in a Sunderland – Newcastle game.

The second half performance was much better, although we had The Giant Pantilimon to thank for two excellent saves from Mitrovic and Wijnaldum, the first one being a game breaker. Had they levelled it would have made life difficult for us.

No doubt the bleating and the moaning will go on until March when we meet again, but by that time we could be in a far more secure position in the league as Allardyce’s influence and tactical nous should be having a much greater impact. 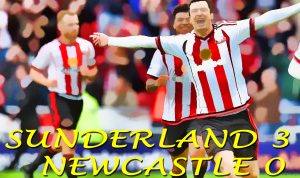 There were a host of positives to take from this performance, not least the realisation that, when he is focused and is concentrating, Steven Fletcher is rather a good centre forward. He worked hard throughout the game and made two excellent runs, the first of which resulted in the penalty/red card incident, while the second saw him sweep home Younes Kabouls’s cross into the net to become “The Official Icing on the Cake Man of 2015”. He defended well from corners and put in an excellent shift and has now converted me to the values of the Hipster Beard. Mine is growing as I type.


When John O’Shea went off (and don’t underestimate the role that he played in this game – his clattering tackle on Mitrovic, one which Sam would have been proud of in his heyday, effectively told the Newcastle player that he was in with the big boys and Mitrovic did little after that) there was a stifled groan around the stadium as Coates came on. Kaboul and Coates have had some difficult moments this season and are about as popular as Mike and Bernie Winters were at the Glasgow Empire.

The greatest heckle of all time came after Mike’s opening number and as Bernie shuffled onto the stage, a voice yelled out “Oh, f****** hell, there’s two of them” – but both were outstanding and did their job very effectively. Coates is a bit of a plodder but he reads the game well and makes solid interventions. Kaboul looked good throughout and the Allardyce effect may just see him become the next new Charlie Hurley. Yes, I am getting carried away.

I thought M’Vila was quietly excellent in midfield and thoroughly deserved to be man of the match. He broke up attacks and, once again, rarely gave the ball away cheaply. He is a very good player, far more effective than Sissoko, who is the ultimate “flatters to deceive” player and much stronger then Wijnaldum, who did impress me. Cattermole relished taking the armband and showed the leadership qualities that our Friends from the North patently lack. He showed restraint after being warned by the ref that the next foul gets you booked, he stood his ground when Wijnaldum tried to get past him in the 43rd minute and the tackle he made on Jack Colback was an absolute cracker. Colback twisted his foot as he went down, hence the injury. And finally, Jermaine Defoe showed what a quality player he is. Should he leave the club in January, he will leave us with much to be grateful for. The stunning winner last time and the wonderful ball through to Fletcher for the penalty justify his wages (ok, maybe not) and his all round play in the second half was sheer quality. John Anderson on BBC Newcastle made the point that as soon as he came on, it gave Sunderland more options and put immediate pressure on the Newcastle defence. He also thought it was a penalty and a sending off. A good man, Ando!!


We now have our first win and have lifted ourselves off the bottom of the league, dumping a Sherwood-less Villa there. The panic is setting in early amongst the bottom placed clubs and if McClaren loses two more games, he may well be the next one to cash in his contract. He is not a manager I either admire or warm to and he may find that Newcastle fans are not particularly forgiving when games are lost which should have been won. A good team would have been two up at half time. They weren’t. What’s more, as was pointed out by many on Radio Newcastle, their heads dropped after they went further behind and they lost interest.

The next batch of games is as always crucial. By the end of November we will have a clearer idea of Allardyce’s team and whether we can aspire to mid table drudgery. And there’s always March 19th to look forward to – can we make it the Magnificent Seven?

Next Post
SA’s Essay: Big Sam on beating the Mags