In all the years I spent at Roker Park, moving from the Fulwell End to the Clock Stand Paddock, with the occasional sojourn into the Roker End (he’s already forgotten his main stand paddock season – ed), there are two nights that stick firmly in the memory. Both are FA Cup 6th Round replays, one against Chelsea in 1992 and the other against Manchester United in 1964.

More readers will remember the ’92 one than ’64 and it’s a good one to start with because we won it. A draw at a decrepit Stamford Bridge, thanks to John Byrne getting on the end of a Paul Bracewell punt, brought the Blues back to a Roker Park that was looking old and tired and where the atmosphere had been distinctly downbeat for much of the season.

Dennis Smith had left the club and Malcolm Crosby, a Sunderland fan since boyhood, was caretaker manager. We had a decent team on paper, with the bulk of them having had a season in the old, ie top-flight, First Division. Marco had left but had been replaced by Don Goodman, who was cup-tied having come on as a sub for West Brom in the first round. 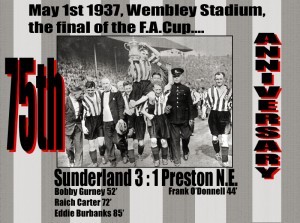 John Byrne had been signed from Brighton and looked a class act, if rather a languid one, and his goals had taken us this far. Roker was packed to its 26,000 capacity as Chelsea rolled into town, managed by, of all people, Ian Porterfield.

We scored first through Peter Davenport and then, in the second half, Chelsea battered us. Tony Norman had a fantastic game in goal and saved just about everything that they threw at us – until Dennis Wise equalised with six minutes left. We were dead on our feet and extra time would have surely have seen a Chelsea side full of football’s nice guys – think Wise and think Vinnie – progress to the semi final.

And then up stepped Gordon Armstrong, a Sunderland fan all his life, despite coming from Newcastle, to win the game with a glorious header from Brian Atkinson’s corner. He powered it into the net and set off on a run around the Roker End and the Clock Stand Paddock and the whole stadium went beserk. To make it even better, it was Wise who had failed to pick him up from the corner.

There was still time for our cult hero John Kay to clatter into Vinnie Jones and cause him to writhe in agony. As the whistle went, the crowd erupted on the last big night in the old stadium’s long and glorious history.

Almost 30 years previously, we had taken part in one of the epic Cup ties of the Swinging 60s, taking Manchester United to three games before going out but proceeding to cement promotion back to the First Division.

Everton had been seen off at Roker in the Fifth Round and next up were Manchester United. They were the holders and, after flirting with relegation the year before, were near the top and challenging for the title.

The 3-3 draw at Old Trafford was a game we should have won: 3-1 up, with goals from Johnnie Crossan and George Mulhall, we contrived to let them back into the game thereby setting up the Wednesday night replay at Roker.

I persuaded my parents to let me go. Monsieur Salut and I set off on the OK Football Special from Bishop Auckland at 4.30. Progress was made to Houghton-le-Spring and then we hit the mother of all traffic jams. It seemed to take an age to get into Sunderland and we abandoned the bus in Roker Avenue to make our way to the ground – along with, what seemed to be the entire population of County Durham.

On arrival, there were thousands of people milling around the stadium. Gates were closed and it looked like a wasted journey, until by some miracle, a turnstile opened in the Clock Stand paddock and we were in.

I saw very little of the game, being squashed down at the front. We scored through Nicky Sharkey and a Maurice Setters own goal and they levelled with goals from Bobby Charlton and Denis Law – that one coming when Monty kicked the ball straight to him. Not an advisable thing to do!!

The official attendance was 46, 727 but many more had gained entry when the gates at the Roker End were pushed open and it is estimated that there were in excess of 70,000 in Roker Park that night.

It went to a third game, which we lost 5-1 at Huddersfield, but promotion was the main target that year and it was achieved in the penultimate game of the season. However, the United game showed the power of a crowd as the Roker Roar poured out over the terraces and around the stands and a fine Manchester United side almost, but not quite, buckled.


We go into the Everton game after a good win – and so do they. It will be another tight game and may the best team win – as long as they are wearing Red and White stripes.
Share this post
Tweet