John McCormick writes: It’s only 70-80 miles from home to the New Meadow but three trains meant for a time-consuming journey.  I left home about 9.30 in the morning and got back about 9.30 that evening. In between I had some long waits, a bus ride, a long walk, some excellent beer in excellent company, a very decent pork pie and a mediocre burger that did not live up to its billing.
And, let’s not forget, a football game that lived up to the cliché of having two halves. Pete Sixsmith takes up the story:

There can be few better examples of the English provincial town than Shrewsbury. Situated alongside the glorious River Severn with the “blue remembered hills” of Houseman’s poem in the background, it’s a real gem with an English Bridge, a Grope Lane and streets named after Darwin and Telford, both residents at some time. 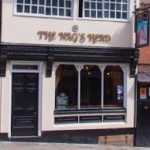 There was a coach to take us to the well-appointed New Meadow (now named The Montgomery Waters New Meadow after a local bottled water supplier and nothing to do with Jimmy) where we arrived just in time to take our seats for the start of the game. The 1700 Sunderland supporters took up one end of the ground and I dare say that there were a few more scattered throughout the other 8,000 that make up the ground. Isn’t that right, John McCormick?

The less said about the first half, the better. We started off well and forced the pace but after the first few minutes, it turned into an arm wrestle with a well organised but limited home side having the better of the game.

We were weak in midfield, a situation that was not helped by a needless booking for Lee Cattermole, and Town took advantage. They were particularly strong from set pieces. Waterfall headed over the bar, Whalley hit it and Omar Beckles should have scored but put it wide. More of him later.

The narrow pitch did not help either Maguire or McGeady, with the latter being particularly effective at running into trouble and not finding the space to beat his man. Consequently, Maja and Sinclair were given poor service as McGeouch and Maguire could not find that telling pass and Maja in particular was anonymous.

There were mutterings in the Salop sun at half time and it soon became clear that Ross and his staff had an alternative to the narrow 4-4-2 we were playing as within twelve minutes, Maja and McGeady had been replaced by Gooch and Honeyman. 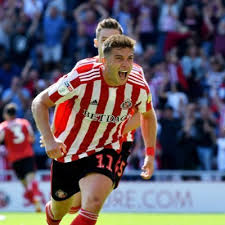 Both brought energy to the team and Gooch in particular caused all kinds of problems for a tiring Shrewsbury side. The first goal came from an excellent cross by the returning American which Omar Beckles managed to turn into his own net as he tried to clear it. That settled any nerves and with Gooch showing a willingness to run at defenders that had not been seen from McGeady, we began to look comfortable.

They threw on an extra striker but Baldwin and Flanagan had settled and provided a solid barrier in front of the always accomplished McLaughlin.

With eight minutes to go and the man banging the drum in the Shrewsbury corner beginning to flag, Jack Ross made another important decision. Off came the hard-working Jerome Sinclair and on came Luke O’Nien, a peripheral figure so far who was maybe regretting leaving Wycombe for Sunderland.

Within two minutes of his entry, those worries were well on their way to being dispelled when he rounded off an excellent move by scoring the second goal. Matthews played it to Maguire who played it to Gooch who made a quick 1-2 with O’Nien and that was game over as he slotted it past Coleman in the Town goal.

Cue for a handful of Shrewsbury fans to snarl at the Sunderland support before going home for an early tea and cue for smiles on our terrace at another important step on the way to rehabilitation.

It was by no means a classic, but it was a win and an important one as Barnsley and Peterborough lost and Doncaster scraped a point. This game was won by the manager who made effective substitutions at the right time and who saw his decisions vindicated when Gooch and Honeyman grabbed hold of the game and turned it our way. He has one of those dilemmas that all managers love in that he now has to choose a team for the next game from a squad of players who all look highly competent at this level.

The journey home was a pleasant one with fellow passengers chuckling away at the sight of the Premier League table and perhaps looking forward to a resumption of Wear-Tyne derbies next season.

There’s a long way to go before that happens but we could take another giant step towards it by collecting all three points at The Keepmoat Stadium on Tuesday night.

Next Post
Sixer’s Shrewsbury Sevens: 2-0 to SAFC, a comfortable win and that elusive clean sheet