Pete Sixsmith popped into the library at Rochester to type his report from the Gillingham match, one he thoroughly enjoyed. After the 4-1 victory at the Priestfield, he’s heading on to Wimbledon, where we hope the Sunderland revival will continue.

No doubt Pete will fill the time with cultural activities and the occasional partaking of refreshment, in the manner described below. Let’s hope he he finds another library, for accounts of his travels make an excellent read even when they don’t focus on the main purpose of his trip

After 20 minutes of frenetic action, the 2,000 Sunderland supporters housed in a 14 year old “temporary” stand at the town end of a neat and compact Priestfield stadium, were able to draw breath and reflect on as good as opening to a game as I have seen in a long time.

Going a goal down inside three minutes was not quite the start that we wanted and it was rather a sloppy goal to concede. 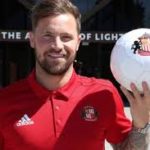 Gillingham centre forward, Tom Eaves, a boisterous presence on the pitch all night forced the ball over the line, causing many of us to face the possibility of a little bubble being burst.

Not a bit of it. Within a minute, Chris Maguire had equalised and within another 19, a sublime strike from George Honeyman and a powerful drive from who else but Max of that ilk, put us well ahead and in a position where we never looked likely to surrender points.

It put down a real marker and when Josh Maja settled the game on the hour, even the most sceptical red and white knew that the game was won.

We learnt a lot from this performance viz:

* Jack Baldwin has settled in perfectly and looks a consummate centre half.

He read the game brilliantly and thwarted the home team when they came at us in the opening period of the second half with a series of impressive tackles and interceptions. He exudes calm, is quick and his timing is in the Dave Watson class

* Honeyman and Gooch are the beating heart of this team.

Both have seen the club suffer in the last two years; both seem very determined to do something about it. Honeyman’s goal was terrific. Gooch ran at defenders and tackled back when he had to. New players will get a feel of the club from these two as their enthusiasm and desire must be infectious.

All over the pitch there were players working hard, doing what was expected of them and enjoying their work. After years of lazy players who would only smile as they loaded their pay packets into the new Bentley this is so refreshing. 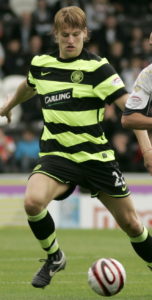 Chris Maguire, a mega-flop at Bury, looks a player re-born. Glenn Loovens (right), the father figure and still a damn good centre half, may not be the quickest, but his organisational skills and his ability to head a ball (something we sadly lacked last year) are vital in League One.

Max Power adds energy to the midfield and is well on his way to becoming a firm favourite. He stepped down a league to play for Sunderland and his departure was mourned by Wigan fans, which says a lot.

The team is full of players who want to succeed and who have bought into the Ross philosophy. We had a new full back pairing for this one – not that a neutral observer would have realised that. Both Love and James looked comfortable. I am particularly pleased for Love who has had a torrid time since he joined us. The manager was fulsome in his praise post match.

Gillingham are a decent side and will win more than they lose this season. They are sharp down the wings and competitive in midfield and in Eaves they have a player whose name may have gone into The Ross Book of Possible Signings. He’s been around a bit but has done well for the Gills.

It rounded off an enjoyable day, spent in excellent company for which thanks to Dave, Willie, Mick, Dave, Sobs and Simon.

Ale was taken in the Golden Lion in Rochester High Street and tales were told before a mature cohort of Sunderland fans took the train to Gillingham, where more ale was taken in a splendid pub called the Will Adams. Gillingham fans were friendly and welcoming and the police and stewards accommodating – although not quite as much as the Gills defence.

Two days have been spent in Rochester, a small city that I urge you to visit. Although not in the Durham league, it is neat and compact and makes a lot of its Dickensian heritage with shops like Pips Fruiterers, Tiny Tim’s Coffee House and Miss Havisham’s Bridal Wear (I made that one up). I looked in vain for Uncle Pumblechooks’s Bondage Parlour; it was not to be found.

I rested my weary post-game head at the Royal Victoria and Bull Hotel, which had been used as The Blue Boar Hotel in David Lean’s 1946 version of Great Expectations.

The cast and crew stayed there and in homage to that event, the management had clearly decided not to change the decor or the furniture and possibly the bedding. I had a frisson of excitement as I realised that I could be in the same room where Jean Simmons slept or maybe I rubbed shoulders with the metaphorical ghost of Alec Guinness – or maybe that was the pints of Mad Cat Plum Source Porter quaffed in The Coopers Arms .

On to Margate now for a couple of days then on to AFC Wimbledon. As Joe Gargery said to Pip “What larks, Pip, what larks.” Let’s hope they continue at Kingsmeadow …

Glen Loovens pic by Alasdair Middleton from Rothesay, Scotland (www.a-middletonphotography.com) (Cropped from the original, Flickr) [CC BY 2.0 (https://creativecommons.org/licenses/by/2.0)], via Wikimedia Commons Will Adams pub sourced at https://whatpub.com/pubs/MED/11750/will-adams-gillingham.  Graphics by Jake. If there is any copyright claim, not answered by ‘fair use’ exemptions, on the images used to illustrate this report, please make us aware and we will add credits or remove as requested.

5 thoughts on “Sixer’s Soapbox: Gillingham are good. We are better”