Malcolm Dawson writes…..“Don’t be too unhappy going home girls – it’s a long way back,” I cheerfully remarked to two lasses in their claret and blue scarves heading for the North Stand Upper, before kick off yesterday. They probably weren’t, as a point each seemed fair after a decent game where both sides had chances. They may have been as disappointed with the penalty award as their manager, but a push is a push and was intended to stop Johnson getting the cross in. No Shearer on MOTD to say a forward is “entitled to go down when there is contact” but Messers Savage (who of course never tried to con the ref in his playing days) and Murphy felt it was soft. You’ll all have your own opinions. But whilst another draw is better than nowt, the inability to turn them into victories is cause for concern. Our biggest disappointment came as our American international once again failed to convert as simple a chance as you ever get in this league right on the stroke of half time. Well at least he’s consistent. Even we atheists were praying he’d have a good game yesterday despite being perplexed at the manager’s decision to start with him rather than Steven Fletcher. Gus was smiling after the game but I suspect his disappointment is greater than that of his West Ham counterpart, those two girls and the rest of the travelling support. Here’s Peter Sixsmith’s take on events. 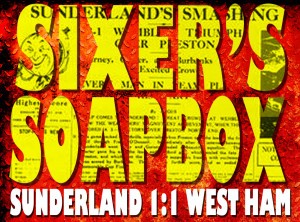 With the clock ticking down to the end of an enjoyable and entertaining first half, fought out between two decent sides, Seb Larsson took off on a coruscating run down the right hand side of the pitch, stretching a Hammers’ defence that never looked anywhere near as comfortable as their highly accomplished midfield. Our Swedish Svengali got to the by-line, looked up and saw Jozy Altidore, free of his marker, thundering in, with only goalkeeper Adrian to beat. It needed an inch perfect ball played into the feet of the American and surely we were 2-1 up.

In went the ball, a fantastic pass from a player who has had his critics on Wearside but who has had a very good season so far. Up went the crowd in anticipation of a half time lead and a chance to build on an encouraging performance. In went Jozy, all bustle and enthusiasm, desperate to score his first Premier League goal in 12 months. Here it was; the cheer was ready in the throats of the 40,000 Sunderland fans shivering in the Stadium.

And he missed it!

He arrived a split second too early and the ball, instead of being pushed over the line, was ever so slightly behind him. Not due to bad luck or a mishit pass or the ball hitting an emerging mole, it was entirely due to Jozy’s adrenaline rush taking over from what should be his striker’s instincts and his natural ability to be in the right place at the right time. Groans from the crowd, disbelief from the players and, apparently, tears from the man himself. That could well be his final act in a red and white shirt.

In my younger days, I would have probably castigated him mercilessly. The likes of Tom Ritchie, David Swindlehurst, and Mel Holden all caught some flak from the fat bearded type stood in the Clock Stand Paddock. But, as I have grown into my dotage, I realise that players do not miss chances on purpose and it is hardly their fault if they are not good enough.

My mood has been tempered as well by reading Ronald Reng’s powerful and moving account of the life and tragic death of the German goalkeeper Robert Enke, a man who succumbed to deep depression on two separate occasions, the second of which led to his untimely death.
He was a top notch keeper in the Bundesliga but had failed at Barcelona and at Fenerbache. Jozy has had two bites at the Premier League cherry and it is clear that he is not good enough to play at this level. His enthusiasm and desire cannot be challenged and I thought that he had a decent first half, but it was clear when he re-emerged for the second that he knew that the game was up.
Credit to Poyet for not replacing him at half time as that would have had a devastating effect on his self-esteem and when he was withdrawn on the hour for Fletcher, he got a sympathetic round of applause from fans who can see that, whatever his weaknesses are, lack of effort and desire are not amongst them.

Fletcher’s arrival and that a few minutes later of Ricky Alvarez, gave us our best spell of the game and introduced some pace and craft to a team that works very hard but which lacks the natural strength and inventiveness that the better teams have. Alvarez looked comfortable on the ball and clearly has the eye for a pass. He worked a couple of impressive openings down the right hand side with Santiago Vergini and had the previously comfortable Carl Jenkinson, struggling.

Connor Wickham blazed a couple of chances over the top and Adrian made an excellent save from another and we ended up with our ninth draw of the campaign. At this stage last season, a point from the fourth placed team would have been welcomed with cheers and huzzahs. This year, there was a sense of disappointment as we trooped back to the warmth of our cars and coaches and enjoyed listening to Arsenal rattle the goals in against the Mags.


How close are we to being a decent side stuck in the kind of mid table obscurity that we crave and how close are we to being seriously involved in the relegation battle? We are well organised and, by and large, have cut out the mistakes that have cost us dearly in the past. The back four is solid and with Jones almost fit and Van Aanholt resuming light training, we will have choices to make. Reveillere had another good game yesterday but he is 35 – positively ancient for a Premier League defender.

In midfield we are solid but we backed off too much yesterday. When Stuart Downing (and didn’t he play well) moved forward to hit the equaliser, Cattermole backed off and gave him the room he needed to rifle home his shot. What we had done against the patricians of Chelsea was not done against their more proletarian East London neighbours. Gomez moves the ball on well but is lightweight and I did not like the nasty foul on Downing for which he was deservedly booked. He took his penalty well despite Adrian’s attempts to distract him and all the hoo-ha about the award. It looked a soft one from the East Stand but who am I to argue. And we could have had one for handball in the second half.
I was quite impressed with West Ham. They played some thoughtful and intelligent football and it was a toss up between Downing and Song for their best player. The likes of Song will never end up in a city like Sunderland and the cosmopolitan mix of London makes it so much easier for West Ham, a club at our level, to attract European/African players.

We now have the week to prepare for our visit to the Sports Direct Arena. We should go with some confidence in that we are difficult to beat and we compete for 90 minutes. Gus’s team selection is very important for this one; do we bring in Bridcutt to tighten it up, leave Johnson to slip past their defenders or take a gamble on Alvarez to show his pace and his quality?

I suspect that Fletcher will be playing up front.

7 thoughts on “Sixer’s Soapbox: winter draws on as West Ham take a point”

Next Post
Sunderland v West Ham: two penalties (one disputed, one denied) and a deflection