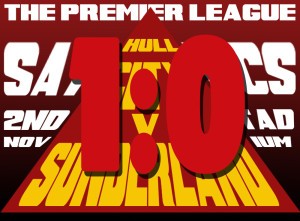 Malcolm Dawson writes…with Halloween just gone it may have been assumed that the time for waking nightmares had passed, but the visit to Hull proved it hadn’t and with Guy Fawkes night fast approaching, provided Sunderland fans with a pair of dummies to throw on the metaphorical bonfire. Listening to Gary Bennett’s increasing frustration as the first half wore on and with Westwood injured, I speculated on potential changes which might turn things around in the second half and get us the vital three points. Ki, Johnson and Giaccherini were all options who might cause the Hull defence problems and with only three minutes to go until the turn round I was hopeful that the manager would come up with a plan to wipe out the deficit and push on to victory. And then I heard the big man, not once but twice almost break down in disbelief as not one, but two of our players decided to show a total lack of control with stupid (and in Dossena’s case downright dangerous) tackles that gave the ref little option but to show the red card. Sandwiched in between the manager almost got one of his own. That the nine men of the second half not only didn’t concede another goal and came close to equalising demonstrated that this had started as a game where three points was achievable. Once again Pete Sixsmith was there and once again, like many other Sunderland Supporters, he left wondering why he bothers. Thank goodness for Sam Smith’s!

As I walked into the Dog and Duck in the lovely town of Beverley, one of the locals, with a distinctly antipodean accent, asked me what I thought the score would be. The Sage of Shildon replied “2-2 as we are in the middle of a good run”, a comment which provoked a hearty chuckle from Messrs Burnip and Scott, stalwart fans of my vintage, who were sat at the other end of the bar. Irony being lost on the Humberside Aussie – a Chelsea fan, so his afternoon would have been more miserable than mine – he went on to tell me and the rest of the pub that he thought that Hull would win “because they have some good players”. He was right on one count.

Indeed, the highlight of the day was the 150 minutes spent in Beverley, a gem of a town, which I have praised to the skies in the past. The White Horse was as it has been since the 1920s – stone flagged floors, gas lamps, copious rooms and Sam Smiths Old Brewery Bitter at a staggering £1.80 a pint.

The day had started well and had included a tour of the flat lands of the Humber estuary as the coach driver attempted to cover all the B and C roads that criss-crossed the flatlands between Goole and Market Weighton. A couple of pints in East Yorkshire’s county town and then on the road, passing the splendid “Bridge to Nowhere”, catching a glimpse of the redundant floodlights at The Boulevard, former home of Hull FC and then along the once proud but now run down Hessle Road, home to generations of Hull trawlermen and the fearsome Big Lil Bilocca and on to the shiny newish KC Stadium, complete with white telephone box.

Team selection was bold. Three forwards, with Johnson on the bench in favour of Borini. A strong bench with Wes Brown ready to make a comeback and Cabral back in the fold. It looked promising especially when the Tigers lined up with a tight 4-5-1 formation. It was there to be won. It wasn’t. The first 35 minutes were dreadful as we gave the ball away, failed to put together anything resembling a decent move and contrived to conjure up a goal for Hull out of nothing. A poor header by O’Shea from a Livermore free kick (given for a foul by Cattermole – who else?) could have been cleared twice but wasn’t. The ball came in and Cuellar beat Sagbo to it, diverting it past Westwood and into the net. It was the kind of goal that wins a game as poor as this one.

As the game trundled on and Hull weaved pretty patterns without actually doing anything, thoughts turned towards the second half and the possible changes that could be made. Ki for Cattermole perhaps, as the Teessider was not having a great time against opponents who passed the ball round him. Maybe the pace of Giaccherini to replace the lumbering Altidore, who may score before the end of the season but probably won’t.
Then, it all went wrong.

Cattermole, who had cut an increasingly frustrating figure, lunged at Elmohamady, right in front of Andre Marriner. He knew straight away that a red was going to be produced and walked before it was out of his pocket – probably the only decision that Cattermole got right in the game. Thus he collected his sixth red card as a Sunderland player and lost any respect he might have had from the fans after his sterling performance last weekend.

Minutes before his latest act of lunacy, Keiren Westwood had left the field as a result of a clumsy challenge by Paul McShane to be replaced by Vito Mannone. So, down to 10 men and a new keeper in situ, there was a need to play out the remaining three minutes and then regroup.

And then, just when you thought things couldn’t get any worse, they did as Dossena hurtled into Meyler, both feet off the ground and studs up. Off he went, completely ruining Poyet’s plans for his half-time talk. What makes professionals do things like this? Both had had poor first halves and both were probably frustrated by Hull, but to jump in as they did is unforgiveable. That Cattermole fouled Elmohamady shows you what kind of person he is. Would he do that to Gerard, Barry or Osman? Absolutely not – they are tougher and harder than he is. Like the bully he is, he picks on someone he knows is not as “hard” as himself.

As for Dossena, he has a poor disciplinary record in Italy and his dreadful challenge on David Meyler suggests that, like Cattermole, he does not learn. Do we need players like this? I would emphatically suggest that we do not.

The second half was a gutsy performance and saw Wes Brown return to the first team and Mannone make some flying saves. Colback did well, probably because he did not have Cattermole running into him every two minutes and the others got their heads down and played for the shirt – 45 minutes too late!! We even created a good chance with Adam Johnson, a half time replacement for Altidore, foiled by a good save from Harper. Other than that, we defended gamely, tackled properly and resisted the temptation to go down to six on field players thus causing the game to be abandoned.
Another winnable game lost. Three more points thrown away to a team who will, in all probability, be looking over their shoulders come the closing weeks of the season. For all their clever passing, they failed to open us up and the goal was totally avoidable.

In successive weeks, Poyet has seen this group of players at their best and their worst. Both sendings off are indefensible and both players should be told very firmly that they are playing for their futures. In a perfect world where things are well ordered, neither would pull on a shirt again, but sometimes needs must. However, any extended contracts for both of them are out of the question and if we go down by one or three points, they should be defenestrated.

The day epitomised life as a Sunderland supporter; optimism on the way there and in The Dog and Duck; pessimism on the way back. Another good run comes to a premature end!!!!!

18 thoughts on “Sixer’s Soapbox: lots to enjoy – but then we had to watch the match!”

Next Post
Poyetry in Motion: plenty to be proud of