Pete Sixsmith was planning a sporting Bank Holiday weekend, which is one reason why you’ve had to wait a little longer than normal to read his take on what was a disappointing end to our league campaign down on the Essex coast.

Friday was meant to be a stop off in Lincolnshire, where Durham were supposed to be playing in form Nottinghamshire in the One Day Cup but that game was abandoned without a ball being bowled, which was perhaps not a bad result for the visitors.

Then on Sunday he was due to break off his journey home in Northamptonshire, where Spennymoor Town were involved in a play off semi final of their own against Brackley Town, a game which finished 0-0 but the team from the North East ensured their involvement in the final by winning the penalty shoot out 5-4. Brackley wear red and white stripes but play at St James’ Park and Spennymoor’s first choice kit is black and white stripes, but their home ground is the Brewery Field. Knowing Pete’s sensitivities he would have had to put his emotions on the back burner to support a team in black and white stripes at St James’ Park, so The Moors obligingly wore yellow for this fixture. (Match report here.)

Sandwiched in between of course was a visit to Roots Hall where the regular season ended with a whimper. I wasn’t sure if Pete had gone to Headingly today, where Durham made a decent start against Yorkshire (though as I type Tim Bresnan has just taken a wicket) but it turns out it was Internet issues which delayed his report. But finally, he managed to get his views on Saturday’s game to us and though he pulls no punches, expect a balanced and accurate account of what went wrong. 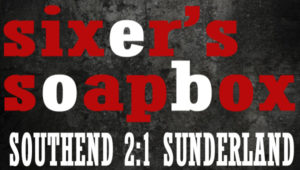 That’s the regular season over then. Forty-six games done, fifth place behind Luton Town, Barnsley, Charlton Athletic and Portsmouth and off we go into the play-offs for the third promotion place. The play offs where we have been unsuccessful in the semi-finals twice and the final twice. Oh, how we are looking forward to them.

Had we managed to win on Saturday, we would have found ourselves travelling the relatively short distance to Doncaster’s neat and tidy Keepmoat Stadium on either Saturday or Sunday and then welcoming Rovers back to the Stadium of Light on the following Thursday or Friday. That would be a very winnable path to the final, seeing as we have beaten the Yorkshire side twice already this season, scoring three and conceding zilch. Then, we could sit back and watch the other two knock seven bells out of each other before picking off exhausted opponents on May 26th.

However, due to our inability to beat a team who, at 5.30 on Saturday, were fifth from bottom, we now go into a pair of games in a run of form as poor as anything that Moyes, Grayson and Coleman supervised, against the nastiest side I have seen this season, who will bring with them some (not all) supporters who seem to want to replicate the old Millwall mantra of “No-one likes us and we don’t care.”

To make it worse, we then have to visit the ageing hulk that is Fratton Park, a stadium fit for the 1950s, on a Thursday night, necessitating a round trip of about 630 miles and a return to South West Durham at about 5.00 a.m. Many thanks to the players for setting that little beauty up for us.

The game at Roots Hall was the meat in a sporting sandwich that also involved cricket at Grantham and more football at Brackley.

Alas, the meat was what Woody Guthrie would have described as “politicians promises meat” – so thin that you could see right through it. Half the bread disappeared as the Notts v Durham game never even started. We toyed with the idea of stopping off in Grantham and visiting the site of the childhood home of Margaret Roberts but decided against it and went to Stamford instead.

The third part was the only uplifting experience of the weekend as Spennymoor Town won their National League (North) semi-final with Brackley Town on penalty kicks, to take them to the final at Chorley on Sunday. If in a positive mood after Saturday night, I may well go.

The weekend was spent in The Holiday Inn, Stevenage in the company of people who are friends from the coach I travel on to away games. The venue was chosen because it was a very good deal and it was close to London, not because of the delights of Stevenage. It reminded most of the group of Newton Aycliffe or Peterlee, but bigger and the postwar architecture was certainly very similar. Unlike our two “new towns” Stevenage is not quite in the grip of irretrievable decay but it is shuffling towards it as retail outlets close and new warehouses situated alongside the main arterial roads supply the consumer with all that he/she wants. Soon, shops will be a thing of the past in the dystopian vision of the future.

Another dystopian vision materialised at Roots Hall on Saturday evening. I looked around this decaying stadium, built after I was born and when Roker Park was about the same age as I am now and saw our former ground as it was twenty years ago – loved by its supporters, but uncared for and no longer fit for purpose. This was by far and away the poorest stadium we have visited this season.

It was full though, as the United support, regular and irregular, turned out to see if their club could dodge the bullet of trips to Grimsby, Morecambe and Crewe next season. Most seats were taken and there was a vociferous and boisterous element of Shrimps fans in the West Stand, in proximity to where we were in the North Stand. Over two thousand Sunderland supporters turned out for a game that could have been a celebration a la Luton in 2007 and Rotherham United in 1988. It could have been a nail biter, like the time we stayed up in 2009 and our friends from the north slipped down under the stewardship of ace analyst Alan Shearer. Instead, it was “do we go to South Yorkshire or East Hampshire or South London next weekend?”

A performance that can best be described as awful directed us towards the South Coast. Charlton saw off Rochdale with consummate ease in front of 12,705 while Portsmouth managed a draw with Accrington Stanley to the mild satisfaction of 18,439. Meanwhile, Doncaster’s crowd was bolstered by Coventry’s flare chuckers to an extraordinary 12,794 as the Sky Blues possibly said goodbye to League football before their demotion to the Midland Alliance where their new 4,000 capacity stadium should see them in good stead. The 9,019 who turned up at London Road, hoping for a dramatic Peterborough win and a Doncaster loss, trudged back to The Coal Heavers Arms disappointed.

The 10,779 who came to Roots Hall saw a spirited performance from United who thoroughly deserved their win. 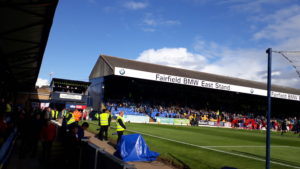 They were the better side for 75% of the game, scored at the ends of both halves and in the end, comfortably avoided relegation. The fact that they were playing a side who seemed to have little enthusiasm for a game of football on a bitterly cold night undoubtedly helped them.

This was by far the worst performance of the season and does not augur well for the next two games. The shape was wrong, individual and collective errors were made and the whole thing was a worrying disappointment.

Of the eleven starters, only McLaughlin, Maguire and Wyke could have any cause for satisfaction. The full backs were poor which may be being harsh seeing as Matthews is returning from injury and Hume has been in and out the last few weeks but neither convinced. Flanagan and Ozturk were responsible for marking in the box and didn’t, hence United’s goals. An overhead kick from White was spectacular but was not achievable had he been picked up and both went AWOL as Masked Man Humphries picked up a loose ball to score the winner.

The midfield was weak until O’Nien arrived to give it the vim and energy that Power and Leadbitter had failed to provide and it was then that we dragged ourselves back into the game. Wyke had already been denied one penalty when he was dragged down but a push in the back was so obvious that even the perpetually smiling for the TV cameras referee had to award it. It was interesting to note that the Southend centre half had a real go at his keeper for hesitating for coming for the ball as Wyke bore down on it, which caused another player to push our man. The keeper knew he had sinned and looked at the ground. His accuser then went over to the referee and berated him for awarding the kick. 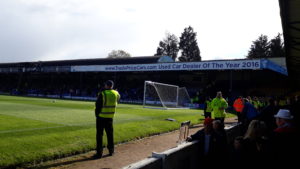 Maguire, who did well enough on his return, despatched it and had we continued to play as if we were interested, Southend would have been down. But we didn’t and we could well be heading for Roots Hall in a year’s time to witness another twelve months of neglect and ossification. Our current version of the G -Force, Gooch and Grigg, were totally anonymous and have been since January. Both really need to start producing in the next three games. They were awful here.

On Sunday, we trekked across country to Brackley, a small town not much bigger than Shildon but with a Waitrose, several banks and streets named after Churchill – but no library. Northamptonshire County Council is dysfunctional and has slashed and burned its way through the infrastructure of the county while Durham has striven to retain as much of its as it can under difficult circumstances.

It was the County Durham team that prevailed in a tense game which now sees Spennymoor one game away from a place in the National League and the possibility of pitting their wits against Chesterfield, Wrexham and Notts County next season. It went to penalties and after Brackley threw away an opportunity to win it by ballooning two successive kicks over the bar and out of the small ground, Lewis Hawkins stepped up and sent them through to give me the only sporting highlight of the weekend.

I hope for considerable pleasure on Saturday night but I am not banking on it…..