Malcolm Dawson writes……..with games coming thick and fast at this time of year and with Pete Sixsmith having to come up with regular “First Time Ever” pieces we agreed on the way to the ground that I would relieve him of his Soapbox duties for this game. 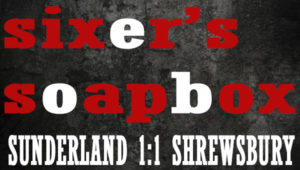 For me this was a day of contrasts. For much of the game we looked by far the better side without ever appearing dominant at any time. We played some lovely possession football, with some marvellous flowing passing movements, but far more often were wasteful in possession. There was some stout defending, crisp tackling and players hustling the opposition, yet at other times The Shrews seemed able to break us down far too easily, as tackles were missed and challenges lost.

The crowd were patient and at times as loud as anything I’ve heard this season at the Stadium of Light, but for much of the game were quiet.

We scored as fine a goal as you are ever likely to witness. About twenty years ago I was at Portman Road as Danny Dichio, Nicky Summerbee, Alan Johnston, Mickey Gray and John Mullin combined to score such a fantastic goal against Ipswich Town that it still lives on in my memory. I suspect that Josh Maja’s bullet header yesterday will do likewise.

Oviedo, breaking from defence, played the ball down the line to McGeady, who passed it inside to Maguire. His flick towards Power was allowed to run on and Oviedo who had continued at pace crossed first time to Maja who running into the area at full pelt, headed home powerfully from inside the six yard box. This was one touch football at its finest, played at speed and incredibly difficult to defend. It epitomised the style of football that Jack Ross wants his teams to play and it came at the perfect time with half time approaching.

Unfortunately, by then we were already a goal behind. No excuses. Just like they had against Walsall in the cup replay, for the first twenty minutes, I thought the team looked sluggish and off the pace. I can’t criticise their effort. It wasn’t like they weren’t trying but just that nothing seemed to be coming off. Maguire ran around a lot without really creating any threat. Gooch, dribbled and twisted and turned and inevitably tried to do too much and lost possession. Shrewsbury, who even at 0-0 and hardly any time gone looked intent on wasting as much time as possible were happy to defend deep and let Baldwin and Flanagan carry the ball out of defence, but far too often their passing let them down. It was if we were constantly looking for the game changing pass and it wasn’t working.

The visitors on the other hand were looking threatening on the break and had by far the better of that first twenty minutes or so but had failed to find the target. After only 4 minutes they looked to get on the score sheet from their first corner but Gooch managed to get the ball away after a bit of pinball in and around the penalty box. Cattermole won a challenge before bringing the ball away from the danger zone and Baldwin made a decent headed clearance following a free kick and Waterfall went close with a header. And that was just in the first ten minutes.

The pre-match minute’s silence had been respectfully observed but the crowd started off in fine voice. The travelling fans were also making themselves heard and at one point started singing “your ground’s too big for you” and I thought our fans missed an opportunity by not singing it back to them – The New Meadow having a capacity of less than 10,000 and an average home gate of only half that, thanks mainly to ourselves, Barnsley and Peterborough taking a large contingent to swell the ranks.

Our lack of penetration quietened the home support and the Shrews were closing us down in those early stages, when we weren’t giving the ball away needlessly. We had perhaps one effort but Maguire’s long range shot was wide and didn’t really cause Arnold in the Salop goal any problems.

We seemed to have weathered the storm and I was just starting to think we were getting into the game when we gave away a goal. Anthony Grant brought the ball into the Sunderland half and found himself confronted by make shift full back Luke O’Nien. He looked to knock the ball past O’Nien but it seemed to me that he knew he had no chance of collecting it before it would be cleared so he ran into O’Nien and fell over. No doubt there will be plenty of TV pundits and Shrewsbury fans who will insist it was a foul but to me it just looked as if our boy was static and Grant was looking for the free kick. The ref saw it his way. The resultant kick was knocked into the box, across the face of goal, a crowd of players jumped for it and it came off Waterfall and found the back of the net. A decent enough goal when it’s one of yours but one that you feel could have been defended better when it’s your side that have conceded.

Not for the first time we found ourselves behind in a game most in the crowd would expect us to win easily. Before the game I had said to Pete that this was one of those teams I always feel nervous about because I almost expect us to slip up. But this team don’t get phased when they go behind and stick to the game plan, but with 40 minutes on the clock we still hadn’t created a meaningful opportunity to score until Tom Flanagan latched onto an Oviedo corner which had been driven in low and hard. The Irishman controlled it well and broke into space by the right hand post, drove in a low shot which the keeper somehow got a foot to and sent it out wide to the left. The referee inexplicably gave a goal kick.

Things were about to change when Maja equalised in the 44th minute and with five minutes of added time I was hoping that we might even grab another before the half time whistle.

It wasn’t to be and we came out unchanged for the second period. Brian Oviedo spent the time when the linesman were checking the goal nets to supplicate himself, like Pope John Paul II getting off an aeroplane, but his prayers were in vain as he hurt his back falling awkwardly and was replaced by Reece James after only another five minutes. Whilst this was happening Charlie Wyke was warming up and once he’d put those elastic band thingies on his ankles I knew he was coming on and indeed he did for the industrious but somewhat out of sorts Chris Maguire.

We played much better in the second half and whilst Shrewsbury continued to waste time looked for a way to break them down. Although we had a succession of corners it was actually Shrewsbury who had the best chance in the first fifteen minutes of the second half but John-Lewis fired high and wide, whilst I resisted the urge to make a pun about him being a bit weak in the home and leisure department.

Haynes had had Lynden Gooch in his pocket all afternoon and eventually the American was taken off as Duncan Watmore was brought on. The Roadrunner’s pace is a threat at this level and Charlie Wyke gave us a physical presence we had been lacking, but we still weren’t getting much on target. Power had a couple of long range efforts, one too high and one blocked, Wyke put a header over and Watmore’s shot from outside the box was also too high.

There was plenty of added time and plenty of incident. From a corner on the right the ball fell to Tom Flanagan whose shot was blocked, then Baldwin had a decent sight of goal but his shot shows why he is a centre back and not a striker, as it went to the left of the post. MacGeady worked his way down the left, played a lovely ball to Watmore who got to the dead ball line and fired in a cross which looked certain to be converted by Wyke, but defender Mat Sadler somehow got in ahead of him and sent the ball over the bar from only a yard or two out. This after Baldwin had done his best to score at the wrong end when McLaughlin did well to save his mis-kick and was down quickly at the near post to collect John-Lewis’s back heel. The Lads kept plugging away, trying to find that last gasp winner, Maja and James both trying their luck but in the end we had to settle for a draw.

Disappointing but we are still unbeaten at home and with exactly half of our season gone we are still there or there abouts with games in hand. With a couple of away games in the next six days another four points would be a good return, but it is our home form that needs to improve because whilst we still haven’t suffered defeat at the SoL, Shrewsbury Town is just the latest in a succession of sides, that includes Fleetwood, Oxford, and Wycombe we would be have been hoping to beat. Those six points would have seen us just one point behind Portsmouth but there’s still a long way to go. With Wyke and Watmore getting back to full fitness Jack Ross will have more options available and who knows what the January window will bring.

I’m off to the seaside on Tuesday and hoping for a Happy New Year. Ha’way the Lads.

Next Post
Blackpool vs Sunderland Guess the Score: seaside frolics?