Another interesting facet of Christmas is looking through the TV film listings to see which ones apply to SAFC. Of course, The Great Escape made its customary appearance and here’s hoping we can celebrate our very own in May.

With regard to Anthony Stokes (rumoured to be interesting Derby and Wolves) I looked for John Goodman’s film, Arachnophobia but no sign of it, while there was one for Joey Barton as James Cagney’s 50 Years in Sing Sing cropped up. Grant Leadbitter may have enjoyed Local Hero while our own Pete Postlethwaite look alike Danny Higginbotham might have got a thrill from Brassed Off. Here’s hoping that we aren’t at the end of the season.

But the real highlight was an outing for Sergio Leone’s epic western The Good, The Bad and The Ugly. When it came out in the late 60s it was an iconic film and I remember queuing outside the old ABC in Holmeside to see it. Apart from Morricone’s fabulous score, the title has been a gift for writers ever since and never one to look a gift horse in the mouth, I hereby take advantage of it. 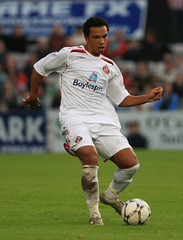 Not pretty, but in the end it was effective. Pete Sixsmith welcomes the ugly side of footballKeano has been saying we need to win ugly in order to start moving away from the bottom three and believe me this was ugly.

It was uglier than Alan Smethurst, the Singing Postman, uglier than the big fat woman who came on at the end of the Morecambe and Wise Show; in fact it was an Elephant Man performance particularly in the second half when we played no football between Richardson’s 48th minute effort and Murphy’s last minute clincher.

The intervening 40 minutes was a succession of last ditch tackles, brave headers and aimless hoofs up front which proved enough to keep a poor Bolton side at bay.

We had started well and Richardson looked the part. He took his goal well and had planted a great corner on the Mighty Kenwyne’s head for the second. But all the old failings reappeared just before half time.

Miller gave away a needless free kick in Murphy/Maloney/Ronaldo territory and Diouf’s weak curler was missed by both McShane and Gordon. Shocking defending which a dominant centre half would have attacked and cleared. That’s our priority in the window.

We then proceeded to give the ball away with monotonous regularity. Fortunately we gave it to a side who were about as creative as we were. What they will do when Anelka jumps ship for Chelsea or whoever is a sign of encouragement for other clubs at the bottom because they had little else.

So, some Good (Kieran and Kenwyne), some Bad (defending at free kicks and hoofing the ball like King James Youth Club Under 12s circa 1992) and plenty of Ugly. Rarely has the beautiful game appeared less enticing but I’ll take the three points and with the addition of some very Ugly players (Robbie Savage is strongly tipped to sign) we may not win any beauty contests but we might just have a chance of staying up.

1 thought on “Soapbox: the good, the bad and the (very) ugly”

Next Post
SAFC, a geography test and a new Mackem lass