What a good lad Alex Rae* was and is. A “crowd-pleasing, combative midfielder”, says Wikipedia. I’d prepared the interview with Les Bradd with a sad reference to Alex not responding to a similar request to preview Sunderland’s FA Cup tie at home to Notts Co (he is the assistant manager), but still felt sure he’d get back to me. Which he did. Must have been the Salut! Sunderland Christmas card that did the trick. Here, then, are Alex’s thoughts on SAFC, Rangers, Notts Co, the game and life …

Salut! Sunderland: What memories of Sunderland were stirred when you first saw Notts County coming out of the hat to play us in the 3rd round?

I never quite got a chance to say bye to the fans when I left so this will be my first opportunity to see the supporters.


Smaller FA Cup crowds means these games are no longer automatic moneyspinners so given Sunderland’s modest record in the cups of late, is this one in which you see County pulling off a surprise?

It will be very difficult – we need to catch Sunderland on a off day and we need to be at our best but will be giving it everything.

You had some good times and not so good times at SAFC. What were the highlights and, if you want, the low points?

The low point would have been the play off final against Charlton. The highlight was winning the league Championship.

Rangers were your boyhood heroes and you must have been pleased as punch to end up playing there. What was it like and does the goal you scored for them stick in the memory as a high point of your career (excuse me if it came off your backside!)?

The goal I scored was a header, but at least I managed to score in front of the Rangers end!

Whatever fondness you retain for Sunderland, you played almost as often for Wolves and, when we played them recently, you said on radio you were rooting for them. Why was that?

Because Sunderland are in a very healthy position and I think they will do very well this year. Being big friends with Mick McCarthy I wouldn’t like to see Wolves go down.

Who were your buddies during your time at SAFC and have you remained in touch with people associated with the club and/or in the area?

Kevin Phillips, and I managed to beat the chairman, Niall Quinn, at head tennis in Portugal in the summer. 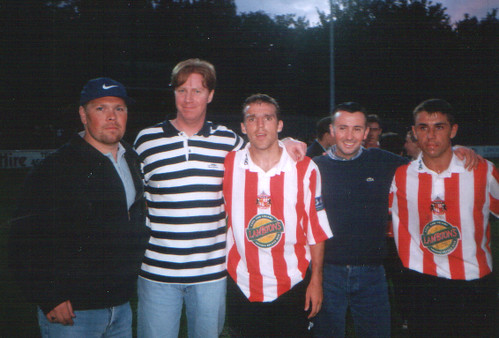 Was there anyone you couldn’t stand?

I hated the kitman, Cookie, because he would never give me any kit!

Who are the men Sunderland should fear in your team and who do you fear, if they play, among our squad?

Lee Hughes is always a threat, and among Sunderland’s squad you would have to say Darren Bent and Jordan Henderson, who I think has a great future.

Do you and Paul have a specific plan/target for County’s progress and do you feel, despite mixed results this season, that you/re on course?

We feel as if we are on decent form at the moment and hopefully we can continue in this vein.

How does management compare with playing?

It doesn’t compare at all. You can’t beat playing, but I am still loving this side of the game.


Who will be promoted and relegated from League One this season, if you feel it is right to say so; same question for the Premier and who will win the FA Cup?

I won’t answer the relegation question as I don’t want to upset anyone. I think Brighton and Southampton will be in the shake up as they have the most money.

You were a tough player in your time but I do not recall you diving, feigning injury, attempting to get opponents booked or sent off. Has that sort of thing become so much part of the modern game that we must abandon high-minded principles and accept it?

It is something that has creeped in in recent years and something that would never have been allowed in my day – or we might have kicked his head in!


And finally, what will be the result of our game?

Thanks Alex. We’re sure the SoL will give you a rousing welcome on your return.