From Wearside to the Amazon and Antipodes, locations mentioned by BBC Radio Newc**tle’s Simon Pryde (left) during his commentary from the Stadium of Light on Saturday, people will be going back to work with smiles on their faces today.

If, that is, they are Sunderland supporters and witnessed, heard or just heard about the last-gasp but phenomenally important win over Derby County.

The result even makes it possible to appreciate the superb skill by Giles Barnes that brought Derby their equaliser. But if you prefer passion to slick footage, read on.

Regulars might expect me to be a little disappointed that the crowd fell, in the end, well below 40,000, especially since there was that rare thing in the Championship – a good away following to make the south stand look like a proper end instead of an embarrassment. 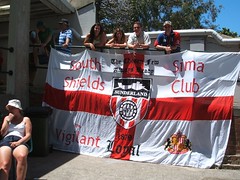 Doesn’t matter where you are…
Picture: indestroy.

But for the previous two homes games, concessions for young fans gave an artificial boost to the attendance. Saturday’s 36,000 was a real 36,000 gate, even if the recent run deserved better still.

What Keano is slowly achieving is remarkable given how low we’d sunk in performance and self-esteem before his arrival.

Yet he needs no one to tell him that the win over Derby still leaves us a point short of the absolute minimum return of five required from that game plus Birmingham and WBA away.

Many people feel West Brom are the strongest side in the division. But we have at last shown that we can compete with the best at this level and a draw or even victory should not be remotely beyond us this Saturday.

Oh, and you wanted that passion? Voila!

2 thoughts on “Spring in the step”