Classic Football Shirts told us late about their January sale but it’s on until midnight Tuesday with 20 per cent off everything if you quote the code CFS2017 and visit https://www.classicfootballshirts.co.uk/?utm_source=Partner&utm_campaign=Salut%20Sunderland&utm_medium=Social

Guess the Score … in which the esteemed supporters of Sunderland and Stoke City, both sides acquainted with that most prestigious of colour schemes, red and white stripes, are warmly invited to predict the scoreline that history shall record …

Why is this week’s Guess the Score appearing early again this week? OK, the main reason is that no one has anything else they want to say beyond pointless reflections on transfers that may or may not happen.

One other reason has to do with Salut! Sunderland housekeeping: it gives Monsieur Salut a chance to help out our very accommodating pals at Classic Football Shirts, who often enough provide little prizes for competitions and awards, with their January sale.

There is 20 per cent off everything but be aware the sale ends at midnight tonight, Tuesday. Lots of Sunderland and/or general football clobber to be had, and it’s good stuff, as our prizewinners and others have observed.

This is what Gav – managing editor of Roker Report (a very posh thing to have, a managing editor I mean) – had to say at Twitter about a top I remember less fondly from the 1992 FA Cup final …

But hey, this is 2017 and we’re not dead and buried. Win a couple of games this month and we’ll start getting nose bleeds as we climb the table. Possible? Yes. Probable? Mmmm … let’s live in hope.

I’ll throw in a mug again for the winner, be he/she a Sunderland or Stoke supporter. Usual rules: first to post the correct final scoreline, UK delivery address, my decision final …

Have a go, Ha’way the Lads and come back some time later this week for a great Who are You?

* This is the Sunderland version of the prize mug offered this week. We’ll come up with something suitable for a Stoke winner … 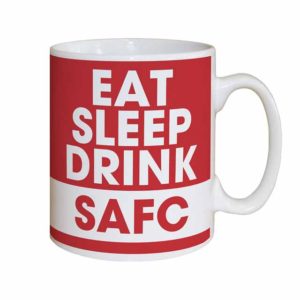 12 thoughts on “SAFC vs Stoke City Guess the Score: one we can (must?) win”