John McCormick writes: I’m trying to remember what I was doing 25 years ago. I think I was looking around for a new job, having been knocked back in my career for being a narky get. I wasn’t really a narky get, I’d just reached the stage of having lost respect for a lot of managerial types and not caring who knew it.  I could have been wrong about the year, though I did get a new job not much later.

No such doubts about what Pete Sixsmith was doing – both his daytime job and his other one as a Sunderland stalwart.

I’m writing this 21 years to the day after the return leg with Sheffield United. 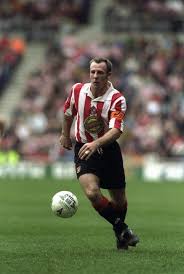 This was when the Stadium of Light really took off and became what it can be, a powerful force in seeing the team through difficulties. Just like it was on Saturday night when the moaners and naysayers vacated their seats and those who came showed their passion for the club and roared them home. But it was a disappointing attendance and we have had to take some flak over it.

In 1998 it was different. Peter Reid had put together a fine team. There were two wingers, a forward combination that mixed youthful enthusiasm with wisdom and experience, callow defenders who got to grips with most of the things that were thrown at them, a goalkeeper who had an inspired night and who, for 12 days, became a hero to rival Monty. And Kevin Ball. He was the lynch pin of the team. An inspiring captain who could play a bit, be it in midfield or the back four, he led by example and dragged us through a difficult pair of games against a United side who were difficult to beat and determined to remain so. He had scored the goal at Bramall Lane that was our lifeline and he drove us forward in order to blunt the Blades and take us to the play off final. He was outstanding on an evening when Sunderland AFC got under my skin again.

I hadn’t been to many games that season after the disappointment of relegation the previous one. I had felt that it was time to take a break. If Roker was going, so was I and I had cancelled the season ticket I had lined up and spent most Saturdays watching Shildon or doing a bit of groundhopping. Ramsbottom United, Castleton Gabriels and Squires Gate were all ticked off that season. I went a few times and liked the stadium and the atmosphere and by the business end of the season I was drifting back, taking in a visit to The Hawthorns for a fine 3-3 draw and home games with Birmingham City and Bury.

I had a ticket for this one and was then offered another high up in the Premier Concourse, right in the corner. I took a student from Ferryhill with me, a lad who had moved to the area from Sunderland and who had had some problems in adjusting to his new school – although he had probably exhibited the same problems at his old one. He used to go to the match with his dad, but dad had fallen on hard times and chose to spend his limited income on strong cider and fortified wine, which may explain a lot.

The atmosphere that night was electric. Michael Gray came in for the injured Chris Makin and Niall Quinn replaced the willing but limited Danny Dichio. For United, Chris Wilder (could he be related to their current manager? I do believe he could) replaced our Greek bête noir, Vassilios Borbokis, and Marcelo who had claimed the equaliser on the Sunday, replaced Gareth Taylor.

And off we went….

There were 40,092 in the ground that night, making it the third highest crowd of the season. There had been more for the two previous games against Stoke City and Crewe Alexandra but neither had brought many fans and seats in the South Stand were allocated to home supporters. United failed to sell their allocation.

I can’t remember United getting out of their half for the next 25 minutes. Tracey held shots from Quinn and Phillips and the crucial second goal came when Gray got to the by-line, pulled it back for Summerbee and his shot was diverted in by Phillips. The crowd went ballistic and the 16-year-old sat with me said “F****** brilliant sir, f****** brilliant.” I gave him 50 lines for repetition.

There was still time for Johnston (what a player he was) to hit the post and for Tracey to make a fine save from Quinn. The noise at half time was intense.

The second half was not plain sailing. United came back at us and we had fewer chances. Cometh the hour, cometh the man and Lionel Perez, who had played every competitive first team game bar one (who played the other, you may well ask and who was it against?) foiled the Blades with a Montyesque double save from Devlin and Saunders.

The last five minutes were pure agony as we waited for Mike Pierce to blow the final whistle. When he did, there was an outpouring of emotion that the Stadium has rarely heard since,  as we believed that we were on the way back to challenge the big boys and maybe even add to our 6 league titles. We were still going strong. Back at school the next day, I had a visit from the lad’s dad and we talked over the teams we had seen in the past and our favourite players. He liked Dave Watson, being too young to have seen Charlie Hurley, but we both agreed that the save that Perez made was as good as Monty’s.

But Lionel was to go from hero to villain 12 days later.

Match clip posted on Youtube by safcforever FTM, Feb 2019. If there is any copyright claim, not answered by “fair comment” on the video or images used in this report please let us know and we will acknowledge ot remove as requested

1 thought on “Sunderland and Playoffs. Part 5: A great night at the Stadium of Light”

Next Post
Sunderland and Playoffs. Part 4: Newcastle and a memory to savour