Monsieur Salut writes: Pete Sixsmith‘s habit of suggesting all manner of Sunderland-related series has been as beneficial to Salut! Sunderland as it has been exhausting for him. This is another rod he made for his own back, a look at playoff joys and sorrows of the past. The first instalment covering the opening act of a dramatic tragedy – when we had to beat Gillingham to avoid dropping to the third tier in 1987 – and the home leg of an exhilarating tussle with the Mags three years later can be found here.

I have patchily vivid memories of both the 1998 semi-final legs against Sheffield United (and, of course, the final). At Bramall Lane, I remember Kevin Ball’s goal putting us ahead to the accompaniment of a short but nasty outbreak of bother up in or near one of the hospitality boxes, United yobs reacting violently to the cheers of a few Sunderland supporters – an incident I was reminded of when I condemned an attack on a Pompey fan in a SoL home section recently.

Pete will now take you back 21 years to the first act in a gripping drama. There’ll be more next week, including video footage of the second leg, one of my own and Pete’s greatest nights at any Sunderland game (I couldn’t locate a clip from the Bramall Lane match though one must exist; Pete’s mention refers to a full review of the Blades’ 1997-98 season which includes highlights of both games; it cannot be embedded but is seen here). Meanwhile, don’t look at this season’s final tables (Championship and League One unless you want an annoying reality check …

Eight years on from the Mags and Swindon, we made our next appearance in the playoffs. This time, we had finished third, a point behind Middlesbrough and four adrift from champions Nottingham Forest, who had replaced the legend that was Brian Clough with Dave Bassett.

We had been relegated the season before in a demotion that should have been avoided with a little bit of good fortune and a couple of additions before the transfer deadline. That combination did for us and I did not take up my season ticket at the new Stadium of Light and only saw a dozen games all year.

We had started at Bramall Lane in August and had lost 2-0 with Chris Makin and Lee Clark making their debuts. Some who started the season didn’t finish it – Steve Agnew, Martin Scott and Andy Melville while Chris Byrne (remember him? – thought not) was on the bench.

The Blades put down a marker by winning 2-0 with goals from Jan-Aage Fjortoft and Vassilios Borbokis and we struggled – badly. In fact, a 4-0 defeat at Reading had the support baying for Peter Reid’s head, so he changed things round, brought in Jody Craddock, Darren Williams and Darren Holloway and we began to take off.

By May we were chasing an expensively assembled Middlesbrough side and it all came down to the last day. If we won at Swindon Town (we did) and Middlesbrough lost at home to Oxford United (they didn’t) we were up. So, the playoffs it was.

United got into the playoffs despite losing their last two games at Crewe Alexandra and Stockport County, pipping Birmingham City on goal difference. The division that year was very different from what it is now, with Oxford, Bury and Port Vale all staying up and Reading, Stoke City and Manchester City being relegated to the third tier. Our friends from Portsmouth avoided the drop by a point, sending City down to their sole season at our current level. They came up via the playoffs – and on a penalty shoot out; Paul Dickov anyone?

The team was settled by the time we went to Bramall Lane on Sunday 10th May. We lined up thus; 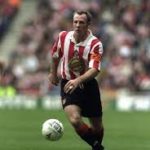 Niall Quinn was injured as was Michael Gray but it’s a good side. Bally was in his pomp that season and dragged us through a lot of games with his huge heart and powerful lungs – and his feet weren’t bad either.

United were sponsored by Wards Brewery, a subsidiary of Vaux, who produced a very sweet, malty beer that quenched the thirst of the steelworkers who made Sheffield what it was. Their team was;

I had a ticket for this game and the Sunderland following was a good one in a crowd of 23,800. It was a sunny afternoon in Sheffield, a couple of pints of Wards had been sampled and we sat back and waited to blunt the Blades. It looked very good when Bally picked up a knock down from the underrated Danny Dichio and crashed a shot in to give us a seventh minute lead. Memory suggests that we looked comfortable and went in at half time without any great worries. But that was to change.

As the man on the Sheffield United highlights video said “Surrendering a lead is a habit Sunderland have had all season” and that was exactly what we did. Lionel Perez, who had changed from shaggy French trawler man to sleek French lounge lizard, failed to make any attempt to come for a not very good corner kick and Marcelo, a Brazilian stranded in South Yorkshire, forced the ball over the line. 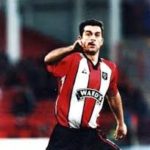 Twenty minutes later, the referee awarded a dubious free kick against Jody Craddock and up stepped Greek wing back Vassilios Borbokis to crash in a free kick from twenty yards out with Perez clutching at air. Borbokis was a decent player, moving on to Derby County and playing for clubs in Athens (AEK) and Thessaloniki (PAOK). He is now the assistant manager at Greek Super League side Panetolikos who are based in the Greek city of Agrinio and where his former Blades team mate Trianos Dellas is manager.

We came close to levelling the scores, they came close to extending their lead. By the time we trooped back to the cars, both sets of supporters were optimistic about a visit to Wembley for the play off final and a possible game against Charlton Athletic who had won by a single goal at Ipswich Town.

The second leg became the first of many great days at the Stadium of Light. Read more about it next week.

Next Post
Test Matches and Sunderland playoffs. Part one: Gillingham and Newcastle United