During the close season we gave readers the opportunity to select their relegation favourites from the entire Premier league. Then we asked readers to select three candidates from the eight clubs which came top.

By  the season’s start some 3,500 votes had been cast in our relegation poll

Hull were firm favourites to go down, with Burnley and Sunderland giving the North a full house. Watford weren’t far behind Sunderland, then came ‘Boro, Bournemouth and West Brom, followed by one hundred votes  for “another club” and finally Crystal Palace, whose 67 votes (we got three times as many to become third favourites) must surely mean safety for them.

How are the eight doing?

It’s a bit mixed. Here’s the situation after game 11, with   Swansea also in the frame as that “other club”. Swansea are currently in 19th place,  although I’m sure not all of the 100 who chose “another club” opted specifically for them back in August: 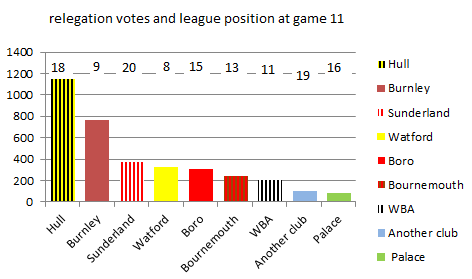 Hull and Sunderland (as ever) are deep in danger but Burnley are in the top half of the table and Watford are above them. Of the others, ‘Boro  and Palace appear to be at greatest risk.

This wasn’t always the case, as the graph below shows.

Hull and ‘Boro started well, heading up the league, whereas we headed downwards. But while we kept going down until we hit bottom Hull and ‘Boro didn’t keep going up. Their fortunes reversed and it wasn’t until recently that they got back on track: 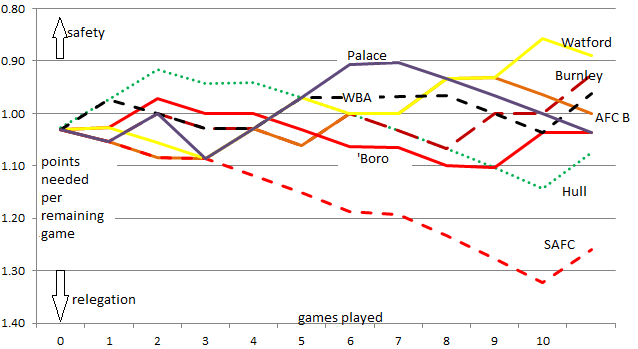 Watford started poorly but soon recovered and despite some inconsistency and a recent spanking they’re sitting pretty in the top half. The other chosen clubs – WBA, Burnley, Bournemouth and Palace – have also had their ups and downs, especially Palace, who aren’t yet sitting pretty despite us gifting them three points. I don’t think any of these clubs will be able to relax for a while yet.

That said, trendlines do show these four (even Palace, who have the same points as Middlesbrough) in a much better light than Sunderland, Hull, and  ‘Boro. These three clubs are on a downward trend whereas the others are edging upwards: 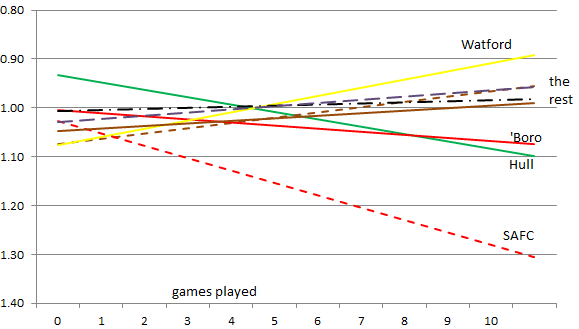 You can see how desperate Sunderland’s plight is – not only is the gap between them and the other clubs so wide but their downward gradient is steeper than the others. That doesn’t mean all is lost, however. They do have their first win under their belt and they may have found a saviour in Anichebe. They could even move above Swansea with a win or two.

Hull also appeared to be on the slide but they too had a good win last weekend; there’s surely a crunch match between these clubs in a couple of weeks, possibly even a season-defining one.

And while ‘Boro don’t look too healthy it has to be said they’re a lot healthier now than they were in mid-October; no-one can argue with a point against Man City.

So it’s possible all three clubs  have turned a corner, just as it’s possible clubs like Palace and maybe even West Ham could dip downwards and enter the death zone.

In other words, whatever those dodgy trendlines say (and you should never head off to the bookies ‘cos you’ve seen them*), it’s still early days. We have an idea of how clubs are doing, we have an idea of how they compare, and we have an idea of what they need to do to ensure safety. But there are twenty-seven games left and another transfer window to come. The best I can do is to repeat what I wrote in August: “I have a feeling it won’t be exactly as our voters seem to think”.

Maybe we’ll have a better idea at Christmas.

*For the mathematically inclined, there’s a value known as the R2, which indicates how well a trendline fits the points on the graph. The nearer to 1 the better the fit. The R2 values for most of the other clubs’ trendlines  are very low, so they aren’t a good fit.

Sunderland’s trendline has an R2 of 0.95. The message is, Be afraid, Be very afraid