Skip to content
Malcolm Dawson writes….as kick off approached I was enjoying a few excellent pints of Timothy Taylor’s Landlord and taking part in a pub quiz less than three miles from Toronto. Meanwhile Bill Taylor, who I don’t think is related to the founder of the Keighley based brewing company (though he might inform me otherwise) was making his way to the BMO Field for last night’s final game of the three match pre-season tour of North America. I went home and watched it on TV via my laptop, as the Toronto I was near to is the one just outside of Bishop Auckland whereas Bill, County Durham born and bred, now lives over there. I could see, even over a dodgy internet connection, the influence that Jozy Altidore has had on his team mates, if Osorio’s glaring miss just before half time is anything to go by! We will be getting a more detailed version of events later from Martin Bates, the latest of our new found correspondents courtesy of SAFC NASA, but we’ll start with some of Bill’s pics and his explanation as to why he has been much missed on the pages of Salut! Sunderland in recent times.

I know what you’re thinking! “Just when you thought it was safe to go back into the water… there’s that bugger Bill Taylor again, doing his celebrated impersonation of a bad penny.” Okay, that’s a shark metaphor gone wrong and, don’t worry, I’m not back to stay.

Some of you may remember I took my leave of this site when the appalling (but much-admired at the time, as I recall) neo-fascist Paolo di Canio took over at the SoL. Somehow, even after his departure, my cynicism — mainly at the club’s management structure remained and I stayed away.

Read Bill’s letter of resignation here. (These are his pictures that follow.)

As an aside, I’m by no means convinced that Dick Advocaat is the answer to our prayers but I’m still a Mackem through and through. I still follow the team closely, though often despairingly, and I still read Salut! Sunderland. And there was no way I wasn’t going to be front and centre (literally — a TFC season ticket-holder got me seats in the first row right next to the tunnel and close to the visitors’ bench) when the Lads came to Toronto.

Other, more expert, eyes were also at the game and will deliver a longer and more considered verdict.

Me? Apart from Defoe’s two goals and a nice solo effort by Fletcher that didn’t come off, Sunderland were not impressive. Toronto played better football all-round, positionally, controlling the ball, setting up chances. Especially in the first half, they constantly forced Sunderland onto the back foot and confined them to their own half. At times, our lot seemed genuinely surprised to find they had an attack starting and had to scramble to catch up. TFC were unlucky not to win. They scored first and came close to scoring three or four times more. They made a lot of substitutions, perhaps to allow as many of the team as possible to say they’d played against a Premiership side.

I hate to say it, but unless Sunderland really pull their collective socks up, this time next year they really will be a Championship side. There’s a LOT of work to be done.

And come on, lads, two yellow cards in a friendly? Really? Seb Larsson’s, which I saw close up, could easily have turned into a red, the way he argued with the ref. 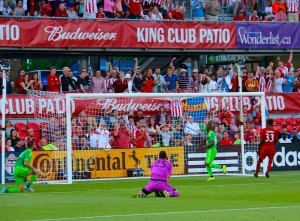 13 thoughts on “Sunderland out west: the Taylor report from Toronto”